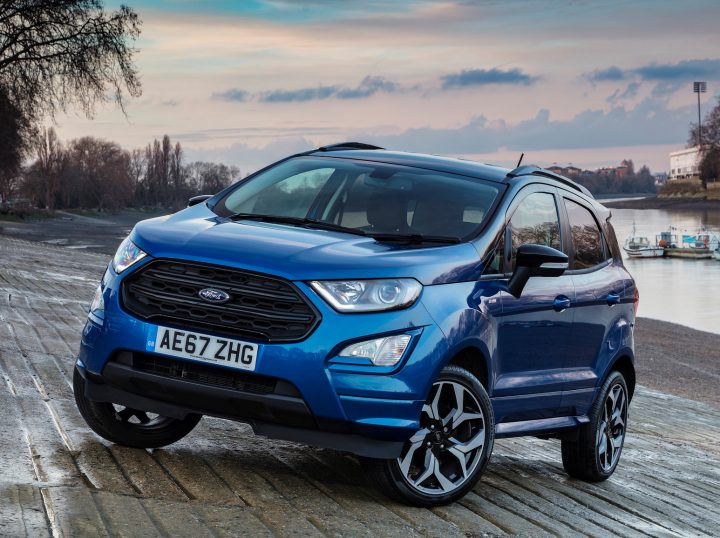 Under the One Ford policy where any model they produced globally, subject to meeting local demand and legislation requirements, could be sold in any market, the EcoSport compact five-door SUV first saw light in 2013 to meet low cost South American markets.

As the compact SUV market grew worldwide for such sized models production was increased with the EcoSport also being built in India and China as well as Brazil.   The EcoSport first arrived in the UK in 2014 and it didn’t receive much praise or sales due to its indifferent build quality, poor handling and its side-hinged load area rear door complete with ungainly door mounted spare wheel instead of the commonplace more user-friendly tailgate we had all got used to with hatchback styled models.

A year later Ford upped the quality of the vehicle, fitted new generation engines, reworked the suspension and steering, improved equipment levels and removed the rear door mounted spare wheel.  In 2018 Ford gave the EcoSport another major evolution to capitalize on the ever increasing European demand and introduction of evermore competitor models. Production for Europe was moved to Romania where the evolutionary EcoSport used their best selling Fiesta range underpinnings plus the interior styling from the Fiesta. Additionally new trim levels, more personalisation options were applied and the exterior looks tweaked to mirror Ford’s Kuga and Edge SUV model ranges. 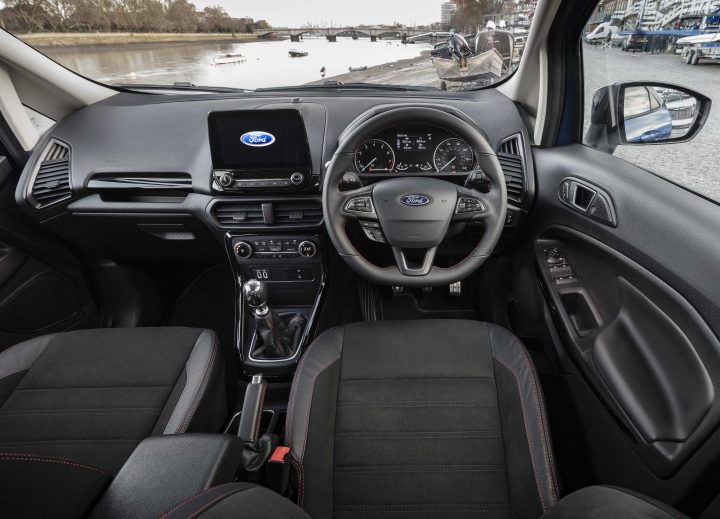 The thick lower A-pillars do restrict front quarter visibility for the driver. The front-end design is also dominated by a new large trapezoidal grille design and distinctive angular headlights. Angular fog light housings complete a front three quarter profile that was inspired by the straps of a rucksack and designed to reflect an adventurous character say Ford – well now we know!

The latest EcoSport now also delivers a new level of interior refinement with easier to use controls and soft-touch materials and a new centre console ergonomically designed for easy operation and featuring fewer buttons. The fascia design is more or less transferred from the top selling Ford Fiesta models, which is a positive move. The new seat designs provide greater front interior space but the rear seat legroom is still limited just as it is with the Fiesta hatchbacks. 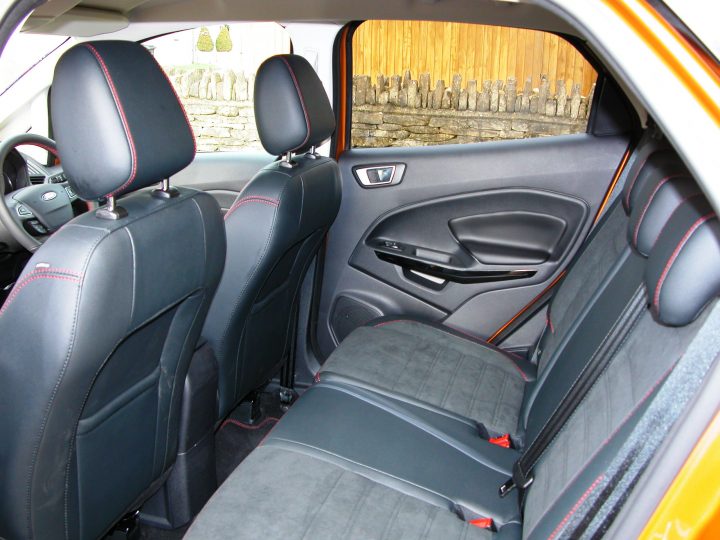 The partial leather upholstery for the Titanium and ST-Line models improves the interior quality. It’s just a pity that heated front seats and steering wheel are a £250 extra cost option for even the top spec level models. Occupants can however match the ambience to their mood with adjustable interior lighting that can be set to one of seven colours.

The interior features a series of smart stowage solutions, including a new height adjustable boot floor that can be raised to provide concealed storage, or lowered to increase luggage capacity to 356-litres. Fold down the rear seats and the load space goes up to 1,238-litres, not class leading but adequate.

The side hinged load area door, rather than using a lift up tailgate, will still be an issue for some potential customers. A new centre console features a built-in folding, sliding passenger armrest with a storage compartment ideal for tablet computers or snacks. 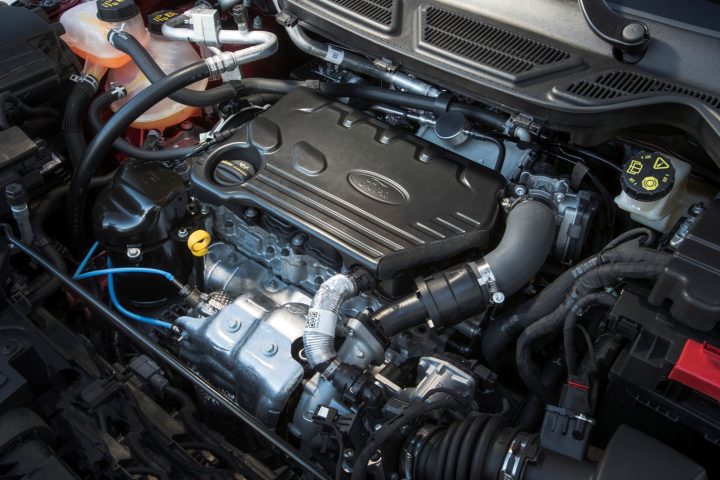 My 2019 model year Ford EcoSport version was the new 1.5-litre EcoBlue TDCI 125hp 4WD manual with the new ST-Line specification and this is the top priced model in the range at £24,250.   The same engine with 4WD, but with the more popular Titanium trim, costs £800 less.

This will appeal to owners more interested in a compact easy to use all-weather capable diesel 4WD SUV rather than the more visually sports orientated ST-Line.

With 300Nm of torque the four cylinder TDCI turbodiesel unit matched with the new six-speed manual gearbox is a nice combination with well spaced gear ratios, smooth gearchanges and its simple and easy to drive, just what most people want.

Top speed is reasonable enough but not so appealing during my extended test driving period over the festive season was the real-life fuel economy.

A series of long journeys, fairly lightly loaded coupled with the usual trips into my local town and some country road driving, the overall final figure was only 39.5mpg, well short of the official 52.3mpg Combined Cycle figure for my test 4WD model fitted with the £600 optional larger 18-inch Shadow Black alloy wheels. 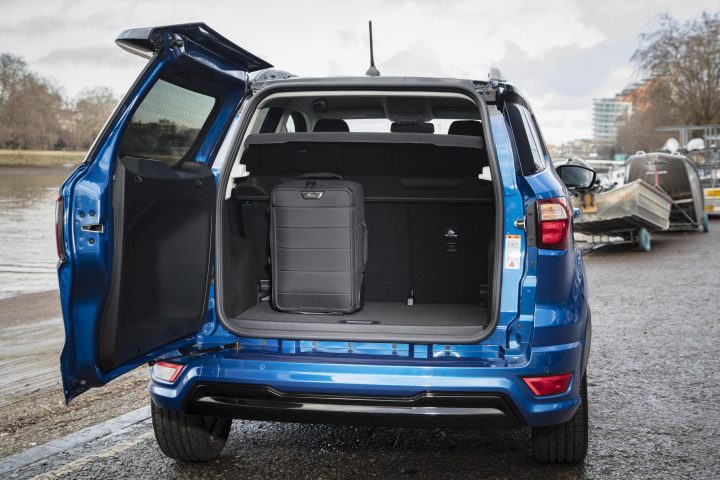 If fitted with the standard 17-inch alloys the official figure is 58.9mpg.  Fitting the larger wheels also changes the CO2 figures from 125g/km to 140g/km so instead of paying £205 diesel rate VED First Year road tax by taking the 18-inch wheel option pushes this up to £515.

In real-life driving conditions the new Intelligent 4WD system is a comfort blanket, you can’t feel it working but it’s there constantly monitoring the grip available at each wheel and always shuffling the driving torque to the wheels with most adhesion on or off road.  It’s no hard-core off-roader but it’s capable enough for muddy or gravel tracks and of course of real benefit if the vehicle is to be used for towing work.  Being a country dweller I’d always opt for an SUV with 4WD but if I lived in an urban area and it was the school run transport perhaps not. As usual its ‘horses for courses’.

Overall the latest version of the Ford EcoSport compact SUV is now the vehicle it should have been when first introduced to Europe in 2014. In everyway it’s much better, more expensive of course but what new car isn’t. 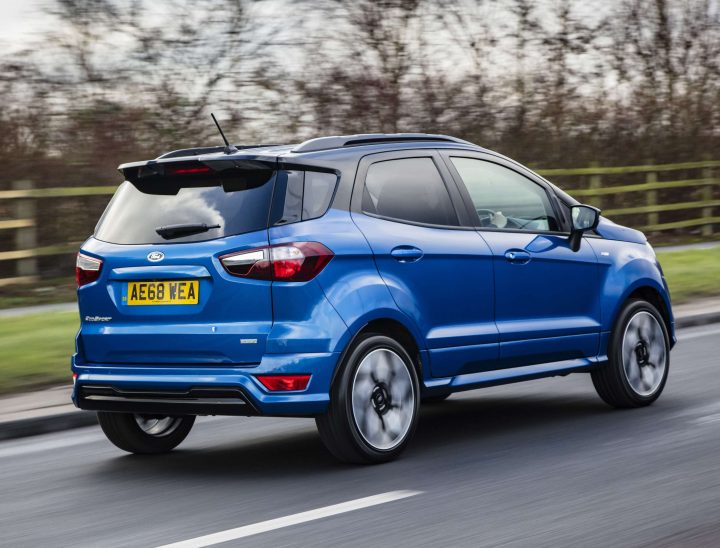 What I also liked about the chunky EcoSport is that it looks like a proper SUV, not like so many competitor models that look like family hatchbacks with more ground clearance. Certainly it now seems to be selling very well following its most recent improvements.

For: Much improved in looks, equipment, driveability than before, handles securely, compliant ride, now proving a popular buy