You are here: Home / Motorsport / 2021 / Pryce is right on top again as Welsh dominate rally

Osian Pryce leads the British Rally Championship after a stunning drive on the final stage of the Trackrod Rally Yorkshire saw him take second in his Melvyn Evans Motorsport-prepared Volkswagen Polo GTI R5.

The 28-year old Machynlleth born driver, who last led the BRC in 2017, was third, two seconds behind Matthew Wilson, going into the sixth and final Trackrod stage, which was a repeat run through the high-speed 11 mile Dalby forest test.

Recovering from what he described as a “shambolic” start to the event, Osian was an incredible 28.9 seconds faster the second time through Dalby to overtake Wilson in a dramatic finale and claim second place by 0.8 seconds.

Osian hadn’t rallied in the North Yorkshire forests since winning the Trackrod in 2013, although that win had been at the wheel of a very different Citroën DS3 R3.

A strong run through the event’s opening Friday night stage in Dalby forest was considered key to success, but an overshoot at a T-junction cost Osian between 15 and 20 seconds as the car’s engine stalled twice and he had to reverse off a bank. He was then slowed by pockets of dust, which reflected off the powerful LED lamps and blanketed the view ahead.

Remarkably, despite the time-consuming overshoot Osian was second fastest through SS1, tied on time with Wilson.

The event restarted on Saturday morning, with five more stages in the famous North Yorkshire forests all held in daylight. Needing to make up for lost time Osian continued with the softer compound Michelin Pilot Sport tyre, and whilst in hindsight the medium compound tyre would have been better suited he was still able to maintain a strong third place by the time he’d reached service in Filey after four stages.

Matt Edwards got his third Motorsport UK British Rally Championship title chase back on track winning all but one of the event’s six forests tests to storm to a dominant Trackrod Rally Yorkshire victory.

Edwards and co-driver Darren Garrod took their Pirelli-shod Volkswagen Polo GTi to the impressive victory with over 30 seconds in hand from their chasing teammates Osian Pryce and Noel O’Sullivan in their similar Michelin-backed machine. Matthew Wilson and Stuart Loudon rounded out the top three in their M-Sport Ford Fiesta Rally2, despite being Edwards’ nearest challenger for much of the weekend. 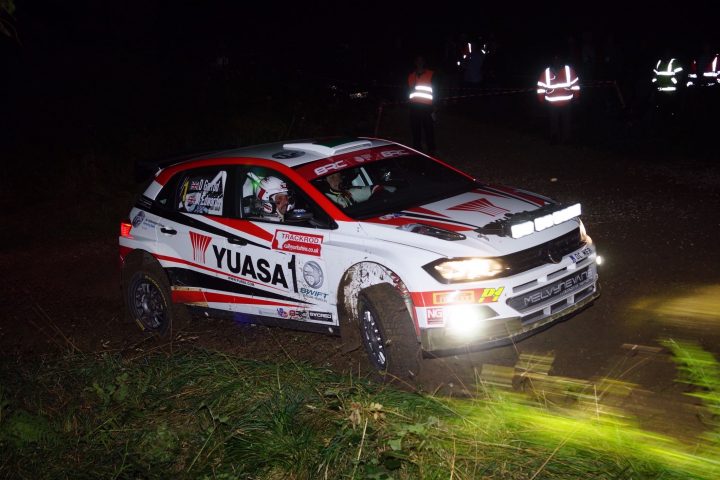 Based at the seaside town of Filey in North Yorkshire, the Trackrod made a return to the BRC calendar for the first time since 2013 and the daunting Dalby Forest would open proceedings with an 11-mile stage under the cover of darkness on Friday night.

The notorious forest complex has claimed many of the world’s best drivers in the past but would also prove to be pivotal in Edwards’ Trackrod assault. He returned a scorching run through the night-time test, to stop the clocks 17.3 seconds faster than both Pryce and Wilson who tied on times.

That impressive form wasn’t just confined to the darkness, with Edwards threading his Polo through the narrow, high-speed tests with precision, topping the timesheets on all but one of Saturday’s five special stages.

In a faultless performance from the Conwy driver which saw him lead from start to finish, Edwards claimed his second BRC victory of the season which takes him into second place in the championship standings and puts down the marker as the only double winner in the series so far in 2021.

“It’s been a brilliant weekend and I`m finding it hard to put it into words really,” said an elated Edwards at the finish.

“We had our backs against the wall coming into this weekend but pulled the rabbit out of the hat when we really needed to. The pressure was on from a championship point of view, but everything literally went to plan, even down the goal of trying to take the lead last night which is what we did and then just consolidated today.”