Osian Pryce has strengthened his challenge for the British Rally Championship title after scoring his best result of the season so far in his Melvyn Evans Motorsport-prepared Volkswagen Polo GTI R5, writes Paul Evans. 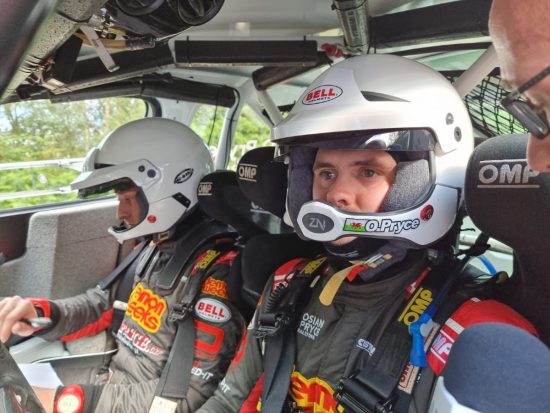 Having finished third on both the Neil Howard Stages and the Nicky Grist Stages, the 28-year old Welshman’s speed and determination paid dividends as he finished second on the Grampian Rally last weekend.

The result moves him from fourth to second in the drivers’ standings – just one point behind Rhys Yates, who, unlike Osian, has used his bonus points scoring Joker.

The ultra-fast Durris, Fetteresso and Drumtochty forest roads near Aberdeen contained a lot more loose gravel than Osian had anticipated, and this contributed to the car sliding around at high speed. The situation was amplified with a rear differential setting that made the back of the car slide even more, leaving Osian with little option but to ease off the throttle in order to stay on the road, even though he knew it was costing him time.

There wasn’t much Osian could do except to keep pushing as hard as he dared, although a very big moment near the end of SS4 had pretty much convinced him to settle for third.

However, he moved up to second place on the penultimate stage, when a severe engine misfire forced team-mates Matt Edwards/Darren Garrod to retire from the event.

After all six stages had been completed, a delighted and somewhat relieved Osian reached the finish line in the runners-up position, 20 seconds behind Matthew Wilson/Elliot Edmondson (Ford Fiesta Rally2).

“I’m happy to finish second, albeit by taking the position off Matt [Edwards] when he retired. These things happen in rallying, but we would have preferred to have fought for the result and achieved it on merit,” said Osian.

“It’s been a very challenging day and we’ve learnt a lot. The road conditions weren’t really what we were expecting, and we were caught out a little in terms of set up. At least we know exactly where the time was given away, and it’s still very much work in progress with the new car.

“That said, the Polo GTI R5 has been great, Melvyn Evans and his team have done another excellent job and we’re leaving Scotland with food for thought and plenty to work on going forward.

“It would have been nice to win the Grampian Rally, as that’s what we came here to do. But we’ve finished on the podium on every round of this year’s British Rally Championship, and with two thirds and a second place finish it’s time to work on getting that win. It’s been a good but not a perfect start to the season, but we’ve strengthened our position in the standings and I can only see things getting better from now on. It’s a good situation to be in.”

The next round of the British Rally Championship is the Trackrod Rally Yorkshire on 24/25 September.