The Welsh business which pioneered electronic breathalysers has secured a new contract with the Finnish Government.

Lion Laboratories of Barry created the world’s first electronic machine to test suspected drink drivers in 1967 and has since  produced hundreds of thousands which are used worldwide.

Yesterday, Wales Economy Minister Vaughan Gething visited the company to congratulate them on its latest success and used it as an opportunity to urge more Welsh firms to consider exporting.

In its latest deal, Lion Laboratories will supply 250 Intoxilyzer 9000 portable evidential infrared breathalysing instruments for use by Finland’s Police, Border Guard and Prison Services. As well as providing the devices, the agreement will also see the company assist with their roll out and deliver full technical training to the country’s law enforcement teams with engineers sent from Wales.

The deal with Finland is the latest in a string of international contract wins for Lion Labs, which already exports to over seventy countries across Europe, Asia, America, Africa and Australia. Its products are widely used by Police Forces all over the world including the UK, Denmark, Malaysia, Thailand, Oman, Switzerland, Namibia, and Australia.

The announcement comes as Lion Laboratories has also appointed new distributors in France, Spain, and Austria over the last 12 months as part of plans to grow its presence in Europe and ramp up employment from 60 as it recovers from the Covid-19 pandemic.

All its hand-held devices are designed and software engineered along with assembly and testing in Barry. International sales currently account for 70% of Lion Laboratories’ trade and its drive on securing new overseas contracts is part of wider plans to grow its export business back to pre-pandemic levels of 85%. 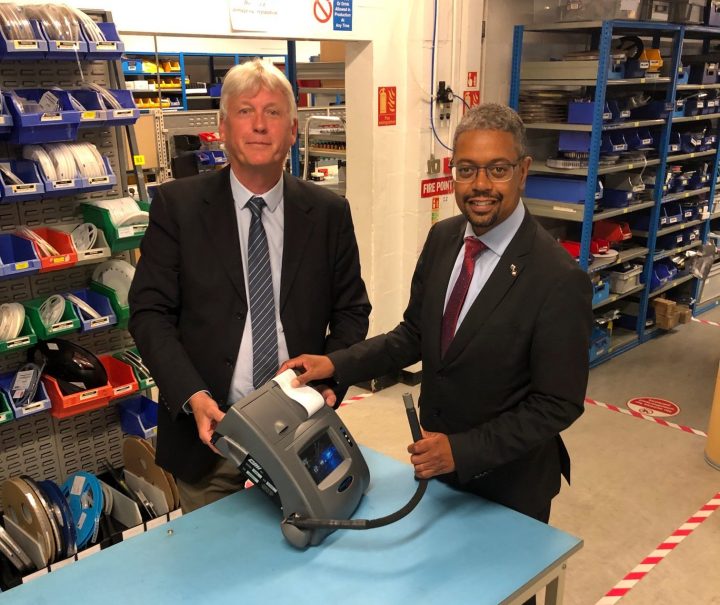 Martin Slade, Head of Sales at Lion Laboratories (above) with the Economy Minister and one of the new machines, said, “Exporting is extremely important to us, both in terms of our security and growth. It ensures that we are not purely reliant on one market and, by covering a wide range of countries, broadens our business opportunities and protects us in the case of any regional dips.

“At the same time, working with a spread of countries helps us to continually improve our products as they are developed to meet various international requirements, rather than being designed for a small number of specific markets.”

Established in 1967, Lion Laboratories was founded by Welsh scientist Dr Tom Parry Jones, who revolutionised road safety with the invention of the original electrochemical breathalyser. Since then, the company has grown to become a global expert in the field of alcohol in breath analysis with its range of instruments helping to prosecute millions of drink drivers worldwide.

Lion Laboratories is currently preparing to participate in several procurement tender opportunities with police forces in other export territories as it continues to support the needs of the market.

Martin believes that one of the key drivers behind Lion Laboratories’ success and export growth over the last ten years has been support from the Welsh Government, which has provided comprehensive market research into new territories and assisted the company in attending trade missions.

Martin added, “The Welsh Government has been extremely supportive in helping us to make key contacts overseas which have directly led to new business. They have helped us to attend trade shows to network and communicate with potential clients and distributors, supported us to reach out to British embassies overseas, and have introduced us to connections in several regions including Germany, Austria and Spain, which have resulted in the establishment of new routes to market.

“During his visit to Wales in December 2021, the Hungarian Ambassador visited Lion Laboratories at our facility in Barry. This was organised and arranged by the Welsh Government and has opened-up talks for potential business there also.”

Economy Minister Vaughan Gething added, “I am really pleased the Welsh Government has been able to support Lion Labs to win this significant order with the Finnish Government.

“Exporting is great for business, and this is another great example of a Welsh company’s exporting success. Our Export Action Plan aims to support more companies across Wales to export their goods and services to new markets internationally and help to create more jobs here in Wales.”

The newest evidential infrared breathalysing instruments are designed to replace the 25 year old units which are usually found in custody suites and the new units can be moved more easily to where they are needed as they are about the size of a flight-bag and simply require an electrical connection.

Lion Labs is talking to the Home Office about supplying some 500 new infrared breathalysing instruments to UK police forces and dozens to PSNI and Police Scotland. The electronic brain of the new Intoxilyzer 9000 is capable of analysing different alcohol limits set by countries and can provide users with immediate evidence for legal action and a host of other features.