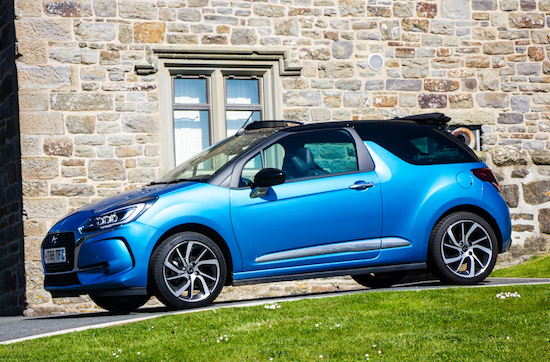 Voting and surveys are all the rage these days, so lets have one for the DS3 Cabrio.

Does soft-top or hardtop move you? Ok, how about a sort of between-Brexit model we’ll call a Cabrio.

DS parent Citroen has always taken a walk along the wild side with its models and styling in a French left-bank sort of way, so the DS3 Cabrio is entirely natural.

What’s not natural is a comparatively wide range which puts other makers to shame and means the DS3 Cabrio buyer has almost as much choice as the DS3 hardtop chooser.

Essentially there are six models with petrol or diesel engines but only one automatic version and priced from about £16,300 to £24,800 at H1 prices in 2016. Our Prestige sits mid-range with its low emissions turbo-diesel BlueHDi engine.

There is a good spread of pulling power from the 1600cc engine and so long as you wisely use the six gears it moves along briskly once you are underway from rest.

The clutch has a surprisingly long travel but the lever is satisfyingly direct, underfoot the brakes had strong power but lacked as much progressive feel as I would like.

Behind the powered steering wheel the DS3 responded with a little deadness but its turning circle was good for town and country use and it was very steady at motorway speed.

Secondary controls were scattered about the fascia and some of the dials were not easy to read, particularly in bright sunlight, which is not what you’d expect in a convertible or Cabrio.

Heating and ventilation was good for an open topped car and the oddments room was adequate but not remarkable.

A very small boot of just 245 litres would seriously limit your awayday adventure so you may want to toss everything on the back seat and go just two-up. You’d have to vote on that.

I also found myself between votes on visibility. The DS was not brilliant when the roof was in place but dropping it simply pushed it all back onto the top of the luggage area and you could see even less behind but more to the sides (see below).

It was easy to get the front seats but the rear pair were more challenging and once seated the knee-room was tight in the back.

The seats were very comfortable and supporting with good adjustment infront and there were good lights and front wipers.

The roof retracted electrically in stages at the push of a button and closed just as easily and you have powered windows as well to make the most of the openness.

The DS3 Cabrio coped very well with any road conditions, from city streets to country lanes and major roads and with its flexible nature it easily returned 50mpg overall, sometimes a little more or less.

Ride quality was slightly on the firm side, but comfortable nevertheless, and while it did roll around some bends it actually stayed well fixed to the road.

There is no doubt the DS3 Cabrio is a comfortable choice for a journey, for two anyway, and it’s economical yet lively when you want it to be.

The reality is that the market offering four-seater convertibles or cabriolets is really very small in the UK so any model is very welcome and with DS3 Cabrio BlueHDi you have a particularly striking and stylish economical car which offers some but few real compromises and gets my vote.