You are here: Home / Featured / WRGB does power of good but last time for VW 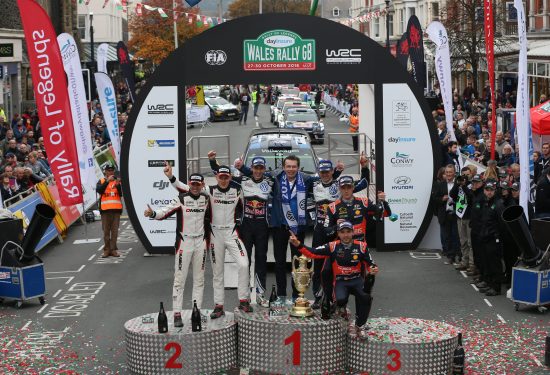 Wales Rally GB  2016 was  the ‘best yet’ after tens of thousands of fans filled the forests to witness the UK’s round of the FIA World Rally Championship.

But it is the last time we will see a Volkswagen in the winner’s enclosure after the German manufacturer this week decided to walk away from the WRC at the end of this year and four championships.

It was a flat-out festival of family fun from start to finish, with Sebastien Ogier finally taking the top step of the podium on Sunday afternoon, clinching the WRC for Volkswagen.

The event revved into life on Wednesday with a visit from the pioneering ‘Dare to be Different’ initiative – a programme aimed at encouraging greater female participation in every aspect of motor sport – as 100 local schoolgirls were given an insight into the high-octane world of international rallying.

Colwyn Bay’s Eirias Stadium provided the backdrop for the start on thursday, and the crews returned to Conwy County three days later for the podium ceremony, with huge crowds lining the streets of Llandudno to see the winners receive the famous trophy.

In-between, competitors tackled more than 200 miles of the most demanding forest stages in the world – with the new October half-term date providing better conditions for spectators and making Wales Rally GB very much a family affair.

That was clearly the case at Deeside Rally Village each evening, as the cars returned to be serviced in full view of enthusiastic fans. Once again, the event enjoyed support from Toyota Manufacturing UK and the result was a bigger and better Rally Village than ever before.

In Wales’ ‘Year of Adventure’, it was only fitting that the route should be the longest yet. In addition to the gruelling gravel roads, the new-look itinerary included the packed Cholmondeley Castle RallyFest Stage, complete with Group B Showcase, as well as a return to Chester’s historic city centre for the first time in almost two decades.

In a truly cosmopolitan field, entries from all around the globe took up the challenge, with the top eight places in the final reckoning occupied by eight different nationalities, underscoring Wales’ appeal as a world-class destination.

In a groundbreaking move, the high-speed story of the rally was broadcast in 4K ultra high-definition for the first time by BT Sport – complete with helicopter – with Channel 5, S4C and regional TV networks in both north Wales and north-west England producing free-to-air exposure to ensure that even fans unable to join in the fun were kept well informed.

VW drivers and co-drivers will now have to find rides in other manufacturers’ cars, which could be difficult if the remaining teams have signed up their crews for 2017. Expect the dramas to continue off the stages now and keep your arms crossed for a hoped VW return in a few seasons.