You are here: Home / Featured / Thrills and spills on very slippery NG Stages 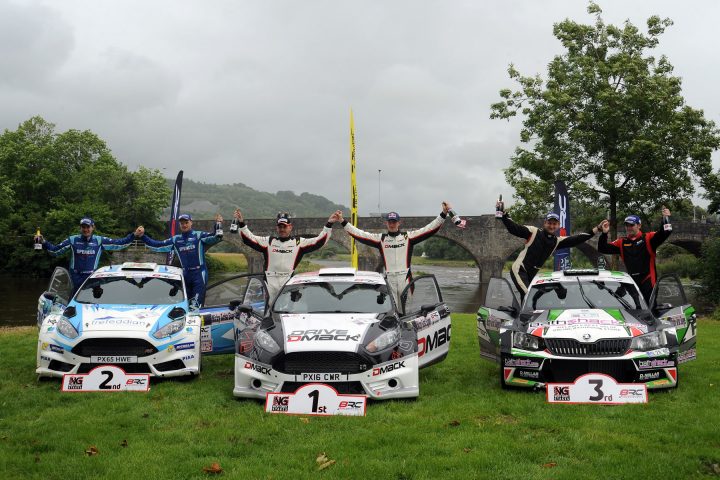 The fifth event of the seven round MSA British Rally Championship saw the DMACK British Rally Team driver make it three wins from five and his second ‘home’ victory in Wales this season.

Fellow Welshman Tom Cave equalled his season best with a fine second while Desi Henry completed the podium after a tough two-day encounter.

Based in Builth Wells, the Nicky Grist Stages is a unique event on the BRC calendar with the two days split into two surfaces. Biblical weather greeted the competitors on the opening day with crews slipping and sliding through 45 miles of forestry gravel stages before tackling the famous Tarmac on the Epynt Ranges on the second day.

It wasn’t just the crews inside the car who were tested this weekend as the service teams had just two-and-a-half-hours on Saturday evening to convert the cars from mud-slinging monsters into Tarmac-hugging weapons.

Series leader Evans had a difficult start to the event, as the Ford Fiesta R5 driver was not to have it all his own way, with a spin on the opening stage and pop-off valve problems on the second. Undeterred by these early issues, the Welshman swiftly got back into his dominating stride, topping the time sheets on 12 of the event’s 15 stages to finish with a healthy 1 minute 11.4 second margin as the cars returned to Builth Wells for the Ceremonial Finish. 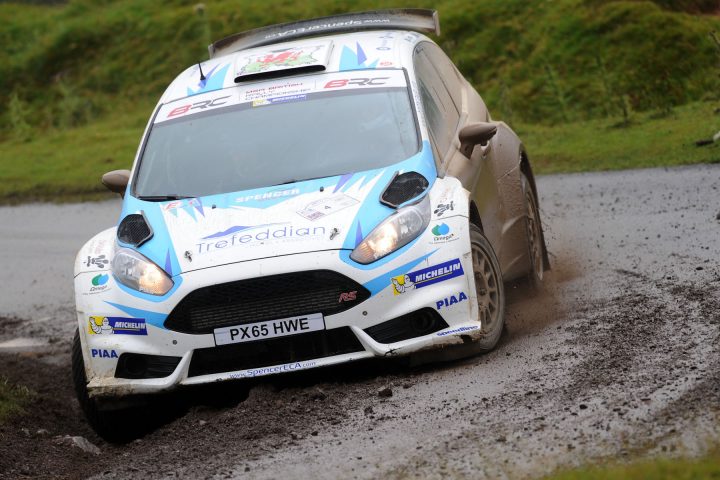 It was to be fellow countryman Cave in his Michelin-shod Ford Fiesta R5 who drew first blood, however, setting fastest time on the opening stage of the rally. Cave (right) would lead the event until an inspired Evans snatched the advantage on the third stage.

Thereafter Cave couldn’t live with Evans’ pace but showed his own improvement in speed by recording another second place and his third podium of the year ­– a result that has helped him to leap-frog Fredrik Ahlin into second place in the championship points standings with two rounds remaining on the calendar.

Ahlin missed out on a points haul after retiring on the opening day with a spectacular crash.

Henry picked-up from where he left off in Scotland with another fine third position in his Skoda Fabia R5. The Northern Ireland driver started off cautiously but gathered pace as he flew through the gravel stages. It wasn’t to be plain sailing for the likeable Irishman, though, as he took a big cut on the opening day nearly sending the Skoda onto its roof. With the Fabia safely back on all four wheels, Desi pressed on – more so when the competition switched to his preferred sealed-surface. Eager to hold station, Henry chalked up a fastest time on stage 12, showing his asphalt form which, in turn, elevated him up the championship points table at the end of the mid Wales event.

Scottish star David Bogie in his Pirelli-backed Skoda Fabia R5 has had a disappointing run of bad luck with two retirements since his podium on the Circuit of Ireland. The Dumfries-based driver suffered turbo issues on the final day but was pleased to score points once again with fourth overall. Circuit of Ireland winner Josh Moffett moved through the order on the Epynt Ranges to place his Fiesta R5 in fifth while rounding out the top six in his Citroen DS3 R5 was Ulsterman Jonathan Greer who also claimed a fastest section time on the Nicky Grist Stages. Greer will be looking for a strong result when the series returns to Ireland for the penultimate round of Britain’s premier rallying series.

Young-gun Rhys Yates took one of his best performances to date in his striking Fiesta R5 with seventh while Jamie Anderson was sadly the biggest loser on the second and final day.

Nestled in fourth at the overnight halt, the Englishman struggled with his limited Tarmac experience on the demanding, flowing stages – settling for eighth at the end of the multi-surface event.

Ollie Mellors was the top S2000 runner in his Proton Satria while Thomas Preston rounds out the top ten in his Skoda Fabia R5.

In the DMACK Junior British Rally Championship, Vauxhall ADAM R2 driver Robert Duggan made it a hat-trick of victories this season. The Irishman drove a faultless event leading from start to finish, heading a Vauxhall Motorsport one-two as the cars returned to the Royal Welsh Showground.

Teammate Mattias Adielsson struggled on his preferred gravel surface on the opening day, but woke up in inspired form with newfound Tarmac speed as he reeled in and overhauled Sindre Furuseth to take second. The Swede was playing his ‘Joker’ this weekend, thus doubling his points and putting him well into the title hunt.

Scotland winner Furuseth in his Renault Twingo R2 held a solid second overnight but his first event on Tarmac was to be his downfall as he slipped back into the final podium position.

The next round of the BRC is the Ulster Rally on the 19/20 August.

Afterwards, Tom Cave said, “I am very pleased with second as it is good for the team and for the championship. Things have progressed even more this weekend, more than we had hoped. Our pace on both surfaces was encouraging especially on Tarmac on the second day.

“We knew it would be difficult to beat Elfyn this weekend but I have learnt a lot from chasing him and want to be even closer on the Ulster next time out. Second in the championship is good but we will keep working hard and keep making progress forward.”