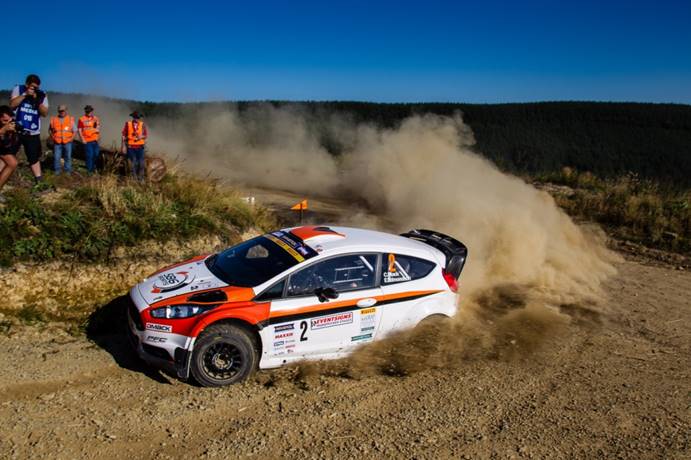 A third maximum points score in as many rounds contested for Ford Fiesta crew Callum Black and Elliott Edmondson means that the destination of the 2017 Pirelli MSA Welsh Forest Rally Championship will not be decided until the final round in November.

Black and Edmondson (above) took the lead among the championship contenders on the opening stage of the Ludlow based Eventsigns Woodpecker Rally but surrendered it on stage four when the engine on their R5 specification car cut out for 30 seconds.

That enabled Ruthin driver Hugh Hunter and co-driver Rob Fagg to move ahead in their Fiesta World Rally Car. Their advantage was short-lived, however, as Black and Edmonsdon recorded a time five seconds quicker than anyone else on the following stage to regain the lead. They went on to consolidate their position on the sixth and final stage.

Taunton duo Martyn and Dawn England had taken second place on the two previous rounds but clutch problems on their R5+ Fiesta sidelined them before stage three on this occasion leaving Hugh Hunter and Rob Fagg to take the runners up sport with third place going to Peter R Stephenson and Ian Windress in their Ford Focus World Rally Car.

Early season Championship leader Andy Davies crashed out of the previous round, the Nicky Grist Stages, and admitted he was having a few problems this weekend getting back into his stride in the Subaru Impreza.

Nevertheless, fourth place was enough to move him and co-driver Max Freeman back to the top of the overall standings and to clinch the Group N title for less modified cars.

With Black and Edmondson moving into second place in the overall title race, pre-event leaders Wug Utting and Bob Stokoe slip to third after taking sixth place points in their Impreza behind the Mitsubishi Evo of Simon Rogers and Wyn Davies.

While the Surrey based duo of Utting and Stokoe can no longer claim the Group N title they will go into the final round of the Championship heading the standings in their class.

An impressive drive by Dave and Toby Brick saw them finish top two wheel drive crew in their 1400cc Vauxhall Nova just six seconds ahead of the Talbot Sunbeam of Chris Powell and Jim Lewis with Rob Dennis and Andrew Boswell third in their Mark II Escort.

Fifth place was enough, however, for Colin Griffiths to retain the lead in the two wheel drive category in his BMW Compact.

The RAVENOL Welsh Challenge recognises the achievements of drivers within their respective classes and it is Andy Davies who also leads that going into the final round but by just a single point from Colin Griffiths with Wug Utting in third place.

Martin Walters holds fourth place in his Honda Civic. He also picked up a RAVENOL voucher for the Welsh championship contender making the biggest improvement on their seeding. 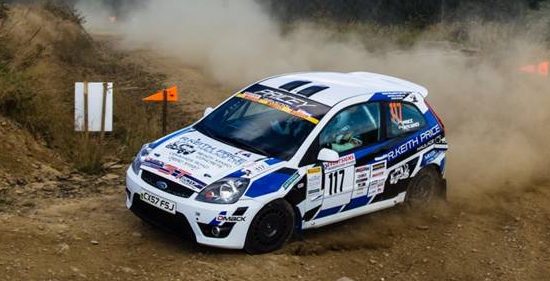 Despite being forced out on stage four with a broken driveshaft on his Ford Fiesta, Rhydian Price (right) tops the junior standings for drivers aged under 23 and so wins a free entry on Wales Rally GB as part of the Road to Wales initiative.

With the destination of many of the class awards still to be decided, not to mention the overall title, and the event organisers promising competitors a number of stages new to the event, the rally promises to be a fitting climax to what has already been a thrilling championship battle.