You are here: Home / First Drives / New Fiat city car is for country lovers at heart 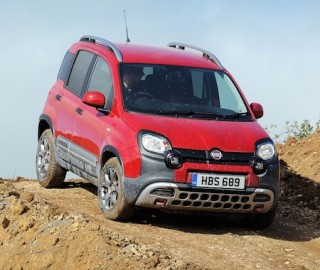 The growth of compact SUVs/Crossovers is significant.

In 2006 they accounted for 7% of the total European new car market, today its 20%.  The more the new sector grows the more new models manufacturers will introduce. The latest addition is the Fiat Panda Cross, a more extreme version of the Panda Trekking 2WD which has traction control and the Panda 4×4 model.

They are of course extreme versions of the five door Panda City Car range, the latest generation being launched in 2012.

Not content with launching the additional Panda Cross models Fiat will in the second quarter of next year bring to market the 500X, a 4WD version of their best selling Fiat 500 range.

The Panda Cross is available in one level of specification but with two engine options.  The 1.3 MultiJet 80hp turbodiesel and the 0.9-litre TwinAir petrol 90hp.  Both have torque on demand all wheel drive, electronic stability control, electronic locking differential and hill descent control as standard. Prices are £16,945 for the diesel and £15,945 for the petrol version.

When it comes to UK sales for the Panda Cross, Andrew Prescott, Fiat’s product manager for the Panda range said, “We are anticipating around 400 units in a full year, around 5% of total Panda sales. We think 60% of the Panda Cross buyers will choose the price-led TwinAir petrol version, the same as with the current Panda 4×4 version.

He added, “Currently the Panda range overall achieves 8,000 annual sales in the UK, 25% of those are taken up by the Trekking and 4×4 versions.”

Introducing the Panda Cross to the motoring media Prescott said, the Panda Cross has to be functional not just stylish, it is a true 4×4 but also a chic compact SUV based on our traditional Panda City Car.  Customers are likely to be tech-savvy who appreciate chic styling – we call them City Adventurers.”

The Panda Cross is based on the current Panda 4×4 introduced in 2012 but with extra equipment and added ride height. It also has a higher mounted air intake to accommodate its 16-inch fording depth. Most likely the Panda Cross will be used by people who regularly choose to drive off-road rather than those people who occasionally come across tricky road conditions or the occasional off-road car park.

But that said there will be a few people attracted by its new macho suit of cladding pieces. There are bolder front and rear scratch resistant bumpers, added ground clearance, 15-inch alloy wheels shod with grippy mud/snow tyres and with the reduced front and rear overhangs  the off roading approach and departure angles are significantly better.

There are added underbody protection and skid plates with wheelarch and sill protection mouldings.  The Panda Cross should be well protected in the country or the urban jungle.LED daytime running lights and redesigned fog lights complete the exterior upgrades. 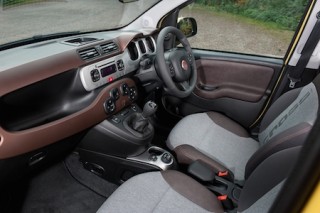 Inside the upholstery is bespoke natural fabric with brown eco-leather bolsters which match the brown door panels and copper coloured fascia treatment.  In the centre console is a new Terrain Control drive sector used to adjust the vehicle’s ability off road through three modes – Auto, Off-Road and Hill Descent Control.

Auto mode, as the name suggest, automatically distributes the engine torque between the front and rear axles without requiring any input from the driver.

On normal roads with good traction 98% of the drive goes to the front wheels but when a loss of traction is detected the system is capable of automatically redistributing the engine torque between the axles in just a tenth of a second.

The level of torque distribution is varied depending on the specific situation using an electro-hydraulically controlled, multi-plate central differential and is versatile enough to direct the all the torque output of the engine to the rear axle if necessary.

In Off-Road mode the all-wheel drive function is permanently activated up to 30 mph. The electronic locking differential to improve traction on slippery terrain such as snow, ice, gravel or mud. As well the electronic stability control system is employed to brake slipping wheels, thus transferring the engine’s torque to those wheels with the most grip.

Hill Descent Control activates automatically off-road when the speed drops below 15mph and remains in standby mode up to 30mph. It employs the vehicle’s electronic stability control sensors and anti-lock braking to maintain constant speed and avoid unexpected yaw movements on steep downhill terrain with unpredictable levels of grip.  It requires no input from the driver other than steering actions.

The Panda Cross might look small but you would be mistaken to think it cannot cope with    tough off-road conditions. It of course is no mud-plugger but due to its light weight, sophisticated four wheel drive  system and descent control,  it skips over hazards and gives safe and controlled climbs uphill and down steep slippery gradients. The performance away from the tarmac is much better than you would think possible and off course with Winter road conditions it will provide a much more secure drive as well.

At the UK media introduction we drove both the petrol and diesel models on and off road.  On road there really is no downside but perhaps a little more cornering body-roll due to the raised suspension.

Off-road  the vehicle was put through its role being driven in most types of conditions ranging from  slippery leaf-covered wet country estate tracks to steep rain covered  grassy and muddy hills to deep water pools and steep climbs and descents in a gravel quarry. All round it performed impressively and safely.

As for which engine to choose? The 0.9-litre 90hp twin cylinder TwinAir unit has a small power increase and produces 145Nm of torque from 1,900rpm.  This distinctive sounding long-stroke unit needs to be revved to get the strongest performance for going up steep off-road climbs.

On road it feels lethargic if you are in a hurry but flexible enough at low speeds both on and off-road and its compliant in traffic on-road. 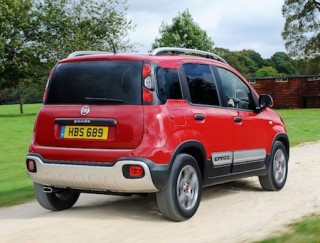 A smoother option is the 1.3-litre, four-cylinder, 80hp turbodiesel unit which delivers more torque at 190Nm from 1,500rpm so it is more precise and controlled at delivering its power during off road driving at low speeds.  It also felt more responsive on-road and generally I preferred it overall, apart from the extra £1,000 in purchase price over the weaker petrol engine. Top speed is 99mph, zero to 62mph takes 14.3 seconds, the Combined Cycle fuel consumption is 60.1mpg and our on-road test figure was 49.6mpg. CO2 emissions are 125g/km so First Year road tax is still £0 cost but for Year Two onwards it goes up to £110.

The Fiat Panda Cross I feel will appeal to two types of customers. Those fashion conscious urbanites that like its ‘Tonka Toy’ robust styling and those country folk who have the need for a compact relatively cheap to run small car which is very capable of coping with tough on or off road use.  The only cause for concern is the extra £1,650 it costs to buy the Panda Cross over the similarly powered Panda 4×4 versions.  It is a big price to pay for a very small 4×4.

Against: Expensive to buy unless the good off-road capability is going to be used, cosy interior space but after all it is really a City Car at heart.