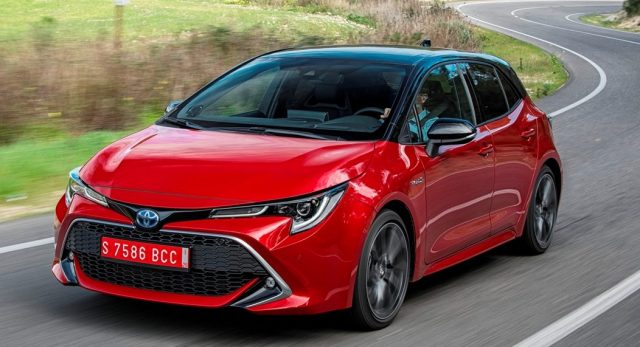 One of the best known names on a car has returned,  writes David Miles.

Some 14 years after the Toyota Auris name replaced the Corolla we see the return of the World’s best-selling car brand name – Corolla – and it’s on sale in the UK from the new registration plate change month of March.

Like the Auris range it replaces, the 12th generation five-door Corolla Hatchback and Touring Sports estate petrol and hybrid models are being built in the UK at Toyota’s Burnaston factory in Derbyshire for European markets while a new Corolla Saloon added to the line up in hybrid form and is built in Turkey.

The all-new Corolla range marks the debut of Toyota’s new dual hybrid powertrain strategy. The Hatchback and Touring Sports are the first models to offer UK customers a choice of two self-charging petrol-electric hybrid powertrains; an improved 1.8-litre with 120bhp and a new 2.0-litre system developing 178bhp both with CVT auto transmissions.

The Saloon is available with hybrid power for the first time, adopting the 1.8-litre hybrid powertrain. Reflecting Toyota’s focus on self-charging hybrid technology, there is just one conventional engine option available for the Hatchback and Touring Sports variants, an 112bhp 1.2-litre Turbo petrol unit with a 6-speed manual gearbox. No diesel engine is available for any model.

As for power outputs, fuel economy, CO2 emission figures and performance; briefly the new 1.2T petrol unit has 114bhp, 185Nm of torque, Combined WLTP fuel consumption depending on model and wheel size of 39.4 to 47.24mpg with CO2 from 128g/km. 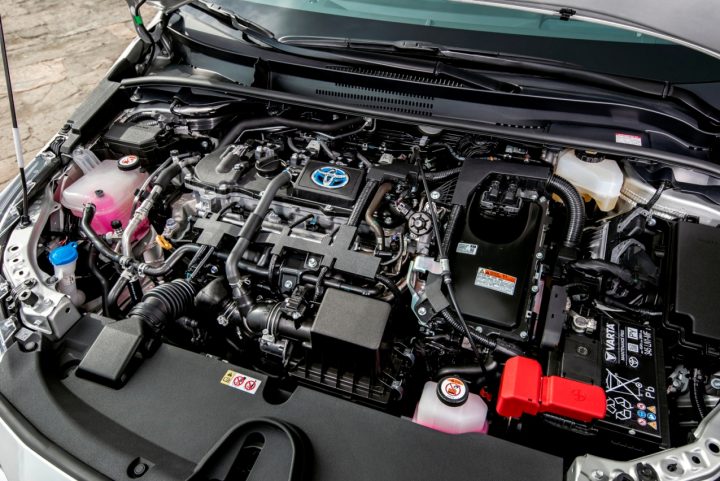 The revised 1.8-litre self charging hybrid system develops 120bhp, 142Nm of engine torque plus 163Nm of electric motor torque. The Combined WLTP figures are 55.4 to 65.9mpg depending on the body style and wheel size.

The CO2 emissions are from 76g/km.

The Combined WLTP figures range from 50.4 to 60.6mpg, again depending on model and spec but all versions are shown with 89g/km CO2 emissions so  VED and BiK tax costs are the same as the 1.8-litre models.

With so much new about the revised Corolla and with is much more appealing and sharper styling inside and out, plus uprated power sources with improved fuel economy and performance, it’s probably justifiable giving the new range a new name other than another Auris generation.

All the models tried gave good feedback through the front wheels, the handling was sharp and all three body types felt well-balanced. Most surprising and pleasing was the excellent ride comfort even when the larger wheels were fitted.

The hatchback’s rear passenger seat legroom we thought was on the skimpy side and we much preferred the extra rear legroom provided by the longer wheelbase estate and saloon models although the headroom in the rear of all three versions is not plentiful.

In terms of exterior styling, the hatchback looks the most sporty  with good kerb appeal  but it is noticeable how much shorter the hatchback appears than the estate or saloon which seem to have a bit more elegance about them. 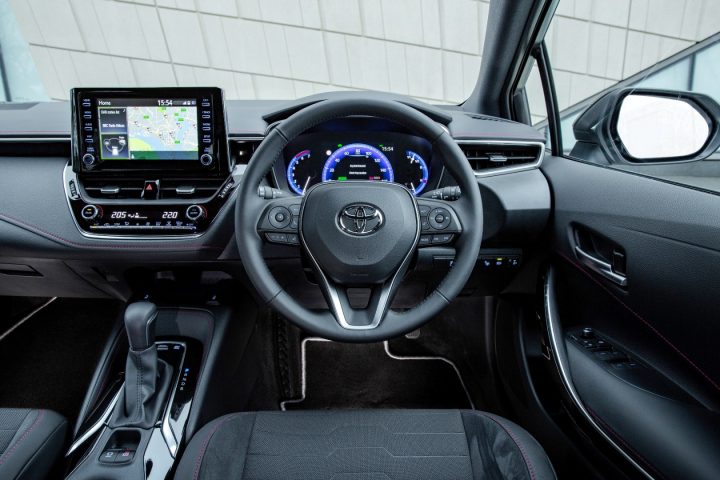 Inside for all three body styles there is a significant improvement over the outgoing Auris models. There is better functionality, ergonomics and quality with ample soft-touch trim surfaces with ample driving support technology right through the four grade levels. But the user-friendliness of the sat-nav and infotainment system lags behind other brands in this sector.

For our Majorcan test-driving schedule there were no 1.2T turbo petrol powered models available reflecting its likely low demand.

The main selling and revised 1.8-litre Hybrid unit with its CVT transmission will be perfectly acceptable for most drivers given the amount of traffic congestion we suffer in the UK.

The hybrid unit works well with the CVT transmission but it is still fairly vocal during brisk acceleration.

Under lighter load, driving in traffic the engine/electric motor combination is ideal for today’s driving conditions and fuel efficient. 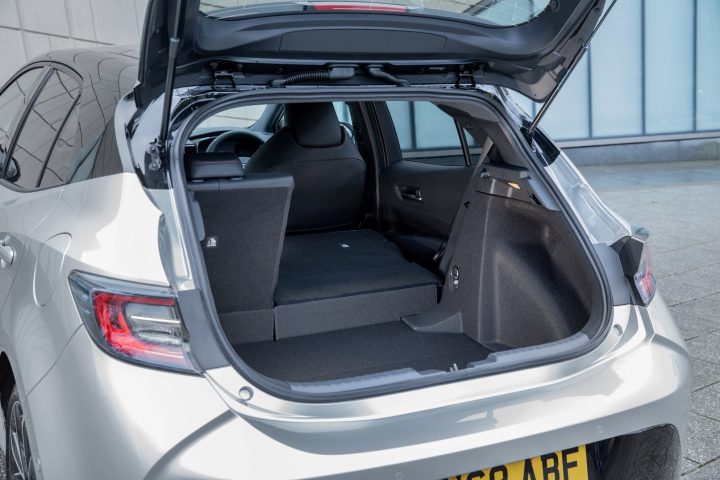 Given the new 2.0-litre Hybrid unit is only available in higher spec levels I wouldn’t pay £2,750 more in Hatchback form than the 1.8 Hybrid model with the best selling Icon Tech model we tested which costs £24,800.

The fuel economy during our test driving for this best selling hatchback version was 59mpg.

We also drove this 1.8 Hybrid unit in the new Saloon which for the Icon Tech spec level costs the same as the Hatchback. Our test drive fuel consumption for this Saloon was 53mpg.

It matched the engine revs, speed and pressure on the accelerator really well. There was still the usual higher engine tone during brisk acceleration.

It was noticeably sharper in delivering its extra power but given its higher cost only high mileage motorway cruisers will gain much benefit from this new hybrid powertrain. We tested this new unit in the Touring Sports estate which costs from £28,820.   Our real-life test drive fuel economy was 48.4mpg driven over a similar route as the 1.8 Hybrid hatchback/.saloon models.

With the choice of three powertrains, four spec levels and three body styles you might think there is a new Corolla to suit most pockets. 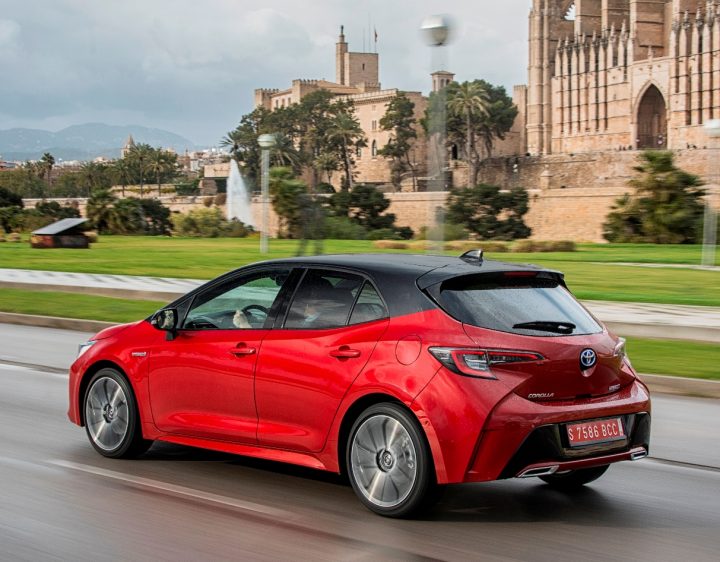 But it faces stiff competition, not only from the latest C-segment hatchbacks and estates, but more likely from the mid-sized SUVs which continue to be the current cars of choice for many new car buyers.

The new Corolla is good but is it good enough to meet that SUV challenge?  More UK customers buying hybrids should help its cause.

Against: Hatchback version suffers from less rear seat legroom than the Touring Sports estate and Saloon, poor infotainment and sat-nav functionality, time will tell if the name-change back to Corolla will appeal to some long-term Auris owners.