A new report by the European Automobile Manufacturers’ Association shows that despite strong growth, the available charging infrastructure for electric vehicles in the EU still falls far below what is needed, and remains unevenly distributed across member states.

Its second edition of ‘Making the Transition to Zero-Emission Mobility’, is an annual study which tracks progress on the availability of the infrastructure and incentives necessary to foster market uptake of alternatively-powered vehicles.

This new report shows that sales of electrically-chargeable cars in the EU increased by 110% over the past three years. During the same period however, the number of charging points grew by just 58%to under 200,000 – demonstrating that investment in infrastructure is not keeping pace with increased sales of electric vehicles.

“This is potentially very dangerous, as we could soon reach a point where growth of electric vehicle uptake stalls if consumers conclude there are simply not enough charging points where they need to travel, or that they have to queue too long for a fast charger,” warned ACEA Director General, Eric-Mark Huitema. 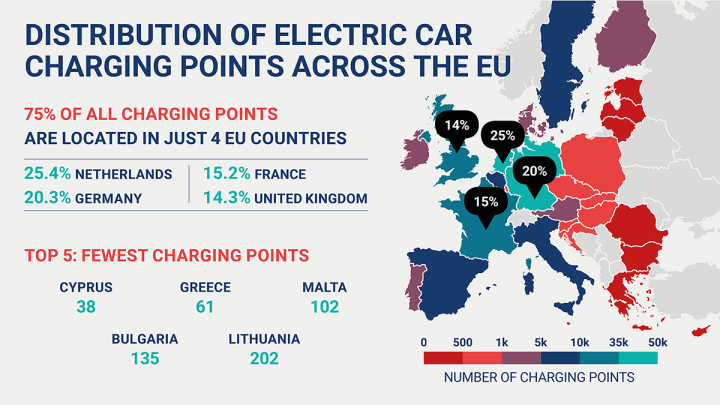 The ACEA’s analysis reveals that just 1 in 7 charging points in the EU is a fast charger at the moment. Only 28,586 charging points are suitable for fast charging (with a capacity of ≥22kW), while normal points (<22kW) account for the vast majority (171,239).

EV Many of the so-called ‘normal’ charging points that are included in EU statistics are common-or-garden, low-capacity power sockets that are not suitable for charging vehicles at an acceptable speed, such as ordinary power outlets in garages.

Another key finding of ACEA’s report is that the existing infrastructure remains highly unevenly distributed throughout the EU. Four countries covering 27% of the region’s total surface area – the Netherlands, Germany, France and the UK – account for more than 75% of all electric charging points.

ACEA has been calling on the European Commission to fast-track the review of the EU Alternative Fuels Infrastructure Directive as part of its COVID recovery plan, including clear and binding deployment targets for all member states.

“With Europe’s higher climate ambitions in mind, there is now an even greater urgency to upgrade the infrastructure requirements for all alternative vehicles,” Mr Huitema stressed.

Norway is seen as a pioneer in the field of electromobility: around 60% of vehicles sold there are powered by electricity.

As a new infographic from Block-Builders.net shows, the proportion of new Tesla registrations there has recently fallen considerably – in 2020, just 7% of new electric cars will be produced by Tesla, compared to a share of 16% last year.

Some 15,686 Tesla Model 3 were sold in Norway in 2019. Up to the end of September this year, however, just under 3,000 units had been sold. The Audi e-Tron ranks first in Norway for new electric vehicle registrations between January 1 and September 24, with 7,801 vehicles sold. VW’s E-Golf is in second place with 4,881 units sold. 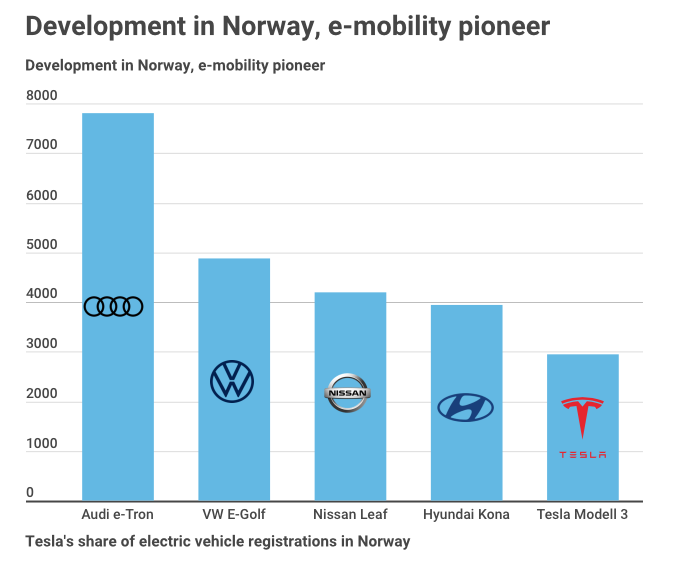 However, outside of Norway the outlook is more positive for the US producer. Tesla sold a total of 90,891 vehicles in the second quarter, compared to 95,356 units in the same period last year.

Nonetheless, relative to many competitors the electric pioneer has come through the corona crisis comparatively well, and this is also reflected on the trading floor. As can be see in the infographic, the price of Tesla shares has risen by 718% within the last 365 days. The market value of many competitors declined over the same period.

Overall, 40% more electric cars with batteries were registered in the European Union during the first half of the year than in the same period of 2019.

“In terms of absolute sales figures, Norway is far from being the most important market for e-vehicles,” adds Block-Builders analyst Raphael Lulay. “However, developments in the land of electromobility could signal a reversal of the trend – showing that recent efforts of German car manufacturers in the field of electromobility are slowly but surely paying off”.