September sales figures from the Society of Motor Manufacturers and Traders show a staggering 236.4% increase in pure electric models registered, albeit from a low point 12 months earlier.

But their sales would have been higher if manufacturers had supplied more and there is now a long waiting list for the lowest carbon emissions models.

Mercedes-Benz were the most surprising brand improvement last month with almost 30,400 sales moving them into second place behind Ford on just over 32,500 and BMW was third with 27,834 registrations, ousting Vauxhall into fourth place with 27,403 models.

There were still ten-times as many diesel models sold in September compared with evs but their downward slide continued with 20.3% dip to record the 30th consecutive month of dropping.

The UK new car market declined -2.5% in the first three quarters of the year. September saw modest year-on-year growth following a substantial -20.5% decline in the same month in 2018, when new emissions regulations and lack of testing capacity across Europe affected supply.

The growth, representing some 4,421 units, was not enough to recover losses of over 87,000 in last year’s important plate-change month, however, leaving the year-to-date market trailing some 49,000 units behind this time in 2018 and the worst performance over nine months since 2013. It is also in stark contrast to other major European markets, which this September rallied in double digits.

While the same regulatory upheaval has been experienced across the EU, in the UK the market is being subdued by the added pressure of political and economic uncertainty, with weak confidence stopping consumers from committing to big ticket purchases.

September’s volumes were driven by the fleet sector, which grew 8.6%. Meanwhile, private demand remained stable, up 0.1%, while business registrations declined -44.8%. Diesel registrations fell -20.3%, as petrols experienced a moderate increase of 4.5%. 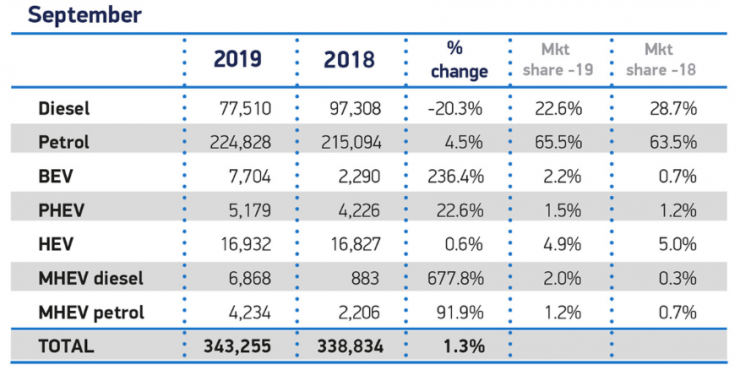 There was good news for battery electric cars (BEVs), which saw the biggest percentage growth of all fuel types, up 236.4% (5,414 units) as new models boosted registrations. Plug-in hybrids (PHEVs) also saw growth for the first time in six months – albeit on the back of a -22.3% decline in the same month last year. Year-to-date PHEV registrations are now -5.2% below the same period two years ago. By comparison, popular hybrid electric and battery electric cars are up 32.4% and 125.1% on the same period.

Seán Kemple, Director of Sales at Close Brothers Motor Finance, added, “While the numbers this month are up, which is good news and a much-needed step in the right direction, let’s not forget the backdrop against which they are being compared. September 2018 saw some of the lowest sales in memory, as the problems caused by WLTP reached their peak.

“Once again, sales of electric vehicles continue to accelerate. As demand rises, we’re starting to see new models being launched into the market with increased range and the same sort of price parity of their fossil fuel equivalents. This, along with the announcement of the zero per cent tax on pure electric vehicles for company car drivers from April 2020, is having a big impact on the sector.

“Diesel sales remain low, as consumers remain confused about fuel type thanks to a range of mixed messages from successive governments over the years. Inevitably, this will have had an effect on trust from consumers, as well as eroding their confidence in buying their next car. The opportunity is there for dealers to provide advice and guidance, and to keep a close eye on trends to ensure they have the right cars on their forecourts in the coming months.”

“With the arrival of new plates in September, we are delighted to see sales increase. This increase in sales comes as a welcome surprise to dealerships around the country as political uncertainty and Brexit have been adversely impacting the industry over the past few months.

“This pick-up in registrations will put a spring in the motor industry’s step. After a testing five consecutive months of falling sales, the turnaround – modest as it is – has provided a welcome respite. In addition to the new plates, September’s growth suggests that consumers are taking advantage of the compelling finance deals currently on offer, while keeping a close eye on developments in the market – particularly when it comes to green cars.

“Encouragingly, AFV sales are up again after recording a drop in sales in July for the first time since April 2017, this includes plug-in hybrids which recorded an increase in sales for the first time in six months. Hopefully, this increase in demand will remain on track and will play a part in helping the government reach its net zero target on greenhouse gas emissions by 2050.

“As demand for AFVs increases, it is important that manufacturers quickly step up to the mark and increase supply so motorists aren’t left waiting for a long period of time for their more eco-friendly vehicle.”