You are here: Home / Featured / Dishing the dirt on the germs in your car

ATS has dished the dirt on its customers.

Cleanliness really has been put next to goodliness this year when shopping, socialising or simply being at home, but how about sitting in your car?

Here, according to Professor John Ward from the Department of Biochemical Engineering at University College London, there is a problem,“Studies have found that on the average toilet seat there are 50 bacteria per square inch and the most heavily contaminated parts of a car number between 2,000 and 4,000.”

ATS invited Prof. Ward to its garage in Brixton Hill, London to see what he’d find. Here, the professor and his team were given eleven cars owned by the general public to inspect, with the same six touch-point areas of each car under inspection.

The places in question? 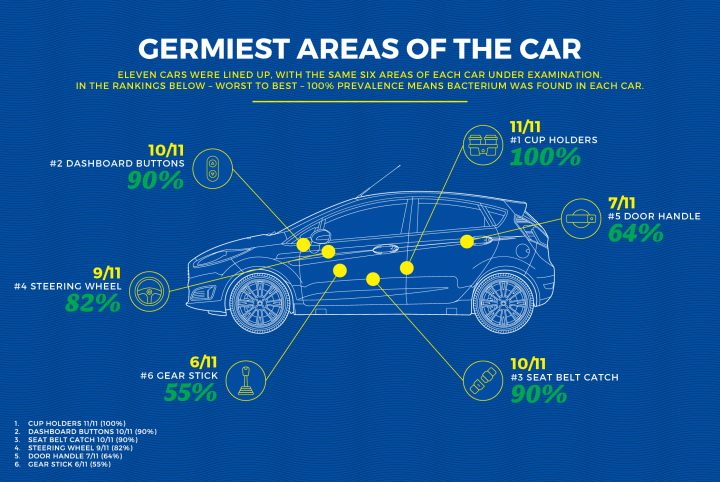 The humble cup holder, the dashboard buttons, steering wheel, gear stick, seat belt catch, and finally, the door handle.
Swabs were placed in agar plates and incubated for 4 days at 30oC. Photos were taken of the bacteria growing before the plates were incubated for 3 more days at the same temperature.

In the report this is what was found – as well as the potential harm these bacteria pose. 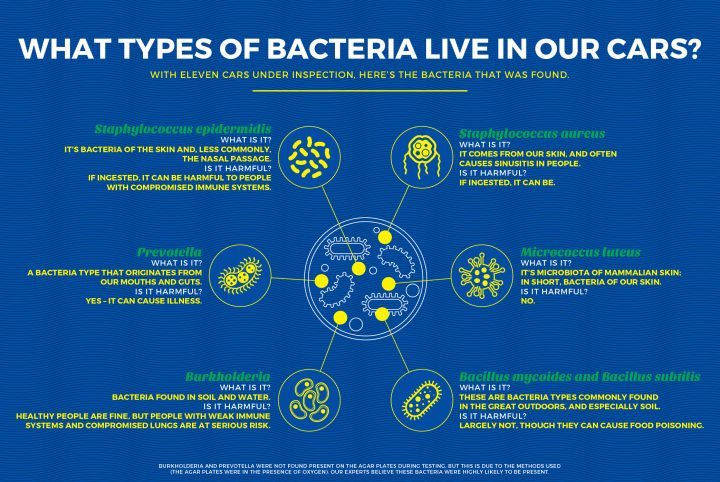 Beware “nooks and crannies”, Prof. Ward notes, as this is where tiny bits of debris and skin flakes accumulate. By contrast, the gear stick and steering wheel fare well, in part because their smooth and shiny surfaces retain less bacteria.

“As for the cup holder – it’s exactly that… a holder with a shape designed to hold and retain the cup… as well as any other small bits of debris. With some little bits of liquid, this provides quite a good little environmental niche for bacteria to be trapped and grow.”

Prof. Ward’s final advice is clear, “Clean your car as you would your home. Wipe down surfaces, and take particular precautions if you have children, as they can pick up viruses you might not encounter otherwise.”