You are here: Home / News / Emissions / Britain’s underpowered in EV incentives and take-up

New research from Select Car Leasing identifies where the UK government ranks in the promotion of electric vehicles compared to 32 other European countries.

Countries across the world are battling a widespread lack of confidence in electric vehicles, due to low availability of charging points, a limited choice of cars and higher cost compared to petrol alternatives.

To battle this lack of confidence in EVs, governments around Europe are introducing incentives such as grants to contribute towards the purchase of an electric vehicle, exemption from road tax and reduced cost of EVs. But which country is offering their citizens the most?

Norway is leading the charge in encouraging citizens to adopt EVs

Based on Select Car Leasing’s scoring system, Norway is the European country offering the most benefits to its inhabitants, scoring 87/100. Norway ranks the highest across 4 different factors, including highest number of EVs per 100,000 inhabitants and market share of EVs on the road.

Although the UK government recently reduced the EV purchasing grant incentive, much to the disappointment of Brits, the country still boasts third place with a respective score of 75/100. 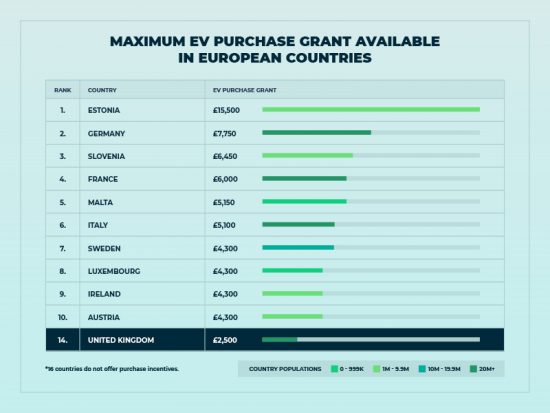 Estonia offers £13,000 more for a purchase grant than the UK

One of the biggest factors swaying people from investing in EVs is their price, especially compared to similar petrol-fuelled models. Despite this, the UK recently reduced their EV purchase grant to £2,500, streamlining the offering to models costing up to £35,000.

Estonia offers the largest grant to its inhabitants, with up to £15,500 up for grabs if citizens change to an electric vehicle. Ranking second, Germany offers just half the amount of Estonia’s impressive EV grant. The UK didn’t make the top 10 with the measly £2,500 grant, placing 14thinstead.

Norway boasts the Number 1 spot for having the highest number of EVs – with 8,520 vehicles for every 100,000 inhabitants. The United Kingdom, in comparison, is placed 10thout of 33. For every 158 people living in the UK, there is 1 electric vehicle. Although ranking in 10thplace, this is the best rank compared to any of the other larger population over 20m. In comparison, Germany comes in at 31stout of 33 countries, with just 30 EVs per 100,000 people. 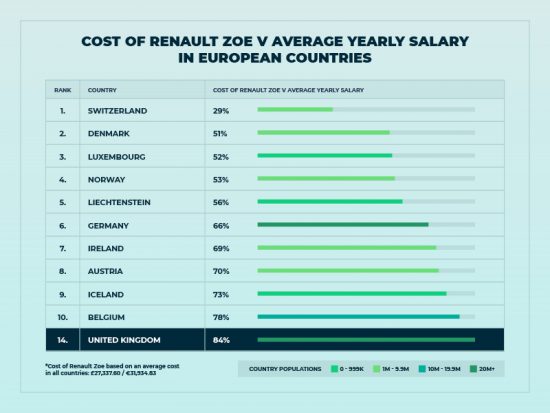 EVs are most affordable in Switzerland

With affordability as one of the most off-putting factors for an EV purchase, Select Car Leasing researched the average yearly salary in each country and calculated how much a Renault ZOE would cost in comparison.

Their research found that the Renault ZOE will cost Switzerland citizens just 29% of their yearly salary, thus making the country the leading contender for EV affordability. As a result, Switzerland has one of the best rates of EV adoption on the continent.

The UK, however, is once again sits at an unimpressive 14thplace, with one Renault ZOE costing an eye watering 84% of an average person’s salary, making EVs less affordable.

It’s clear that from Select Car Leasing’s findings, Scandinavian countries are leading the charge in comparison to other countries on the continent. This could be because of the higher yearly salaries, meaning inhabitants have the monetary freedom to consider going electric. Countries with lower average yearly salaries would be wise in taking a leaf out of their Scandinavian neighbour’s book if they want to lead the EV charge.