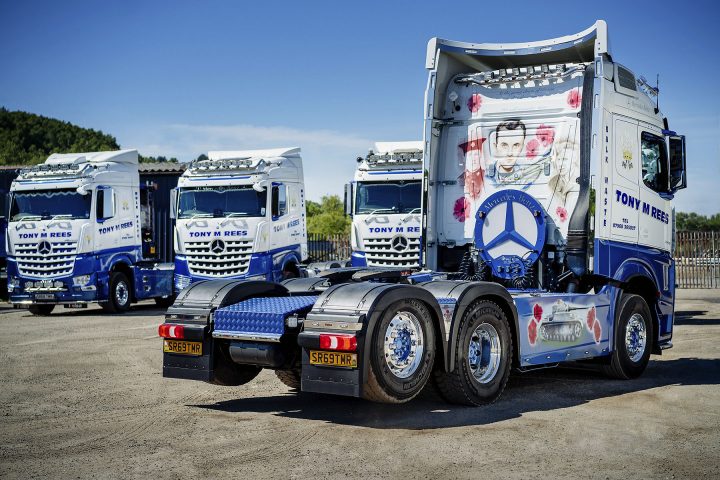 As a self-confessed Formula 1 addict, Tony Rees usually decorates his Mercedes-Benz trucks with airbrushed artwork of his its stars.

Instead of Lewis Hamilton and Valtteri Bottas, however, the latest bears an image of his grandfather, alongside pictures of his wife’s and driver’s grandfathers.

All three are depicted in uniform on the back wall of his new-generation Arocs 2553’s StreamSpace cab, each having served during World War II in a different branch of the Armed Forces. The design, which also features a Spitfire and, on the sideskirts, a naval vessel and a tank, was commissioned as a personal tribute to mark the 75th anniversary of VE Day.

Established by Mr Rees in 2004, the company that bear his name is based in Porthcawl, Bridgend, and specialises in the transportation of a broad variety of scrap, including everything from carpets and electrical items, to metals and plastics. It collects material from commercial clients nationwide and takes it either to recycling centres or to landfill sites.

Tony M Rees runs a fleet of eight tractors, which work with bulk ejector trailers. Seven are by Mercedes-Benz – five muscular Arocs models and a pair of older Actros – and were supplied by South Wales Dealer Euro Commercials. The sole exception is a 17-year-old Foden Alpha, which is the proprietor’s own ‘daily driver’.

Its first truck from the new-generation Mercedes-Benz Arocs range launched last year, the latest, eye-catching addition to the fleet has a flat-floored StreamSpace cab, and replaced a French-built unit. Highlights include the stylish and intuitive Multimedia Cockpit, which features twin screens – one with ‘touch’ functionality – in place of traditional switchgear; enhanced versions of the established Actros Brake Assist emergency braking, and fuel-saving Predictive Powertrain Control systems; and ground-breaking Uptime predictive maintenance technology.

As a 2553 variant, the Arocs is powered by a 12.8-litre in-line six-cylinder engine which produces 390 kW (530 hp). This output is transmitted to the road via the middle axle. While Tony M Rees’s oldest trucks are both 4x Actros models, all of the Arocs it has since purchased have had lifting tag axles. The operator prefers this configuration for its increased fuel-efficiency and reduced turning circle, a boon on sites with restricted access.

The truck has a painted chassis and grille, no fewer than four Kelsa light bars, and rides on Alcoa alloy wheels. Its side skirts and cab roof deflector were fitted by SB Components, of Wisbech, which also added a microwave oven to complement the Mercedes-Benz fridge.

Meanwhile, the airbrushed livery, which also includes the most famous lines from Laurence Binyon’s Great War poem For the Fallen, and the heraldic Prince of Wales feathers badge, is the work of artist Alan Smallwood. Appearing either side of Mr Rees’s grandfather Eifion Evans, are his wife Sarah-Jayne’s grandfather William Johnson, and driver Paul Evans’ grandfather Gwynfor Evans. 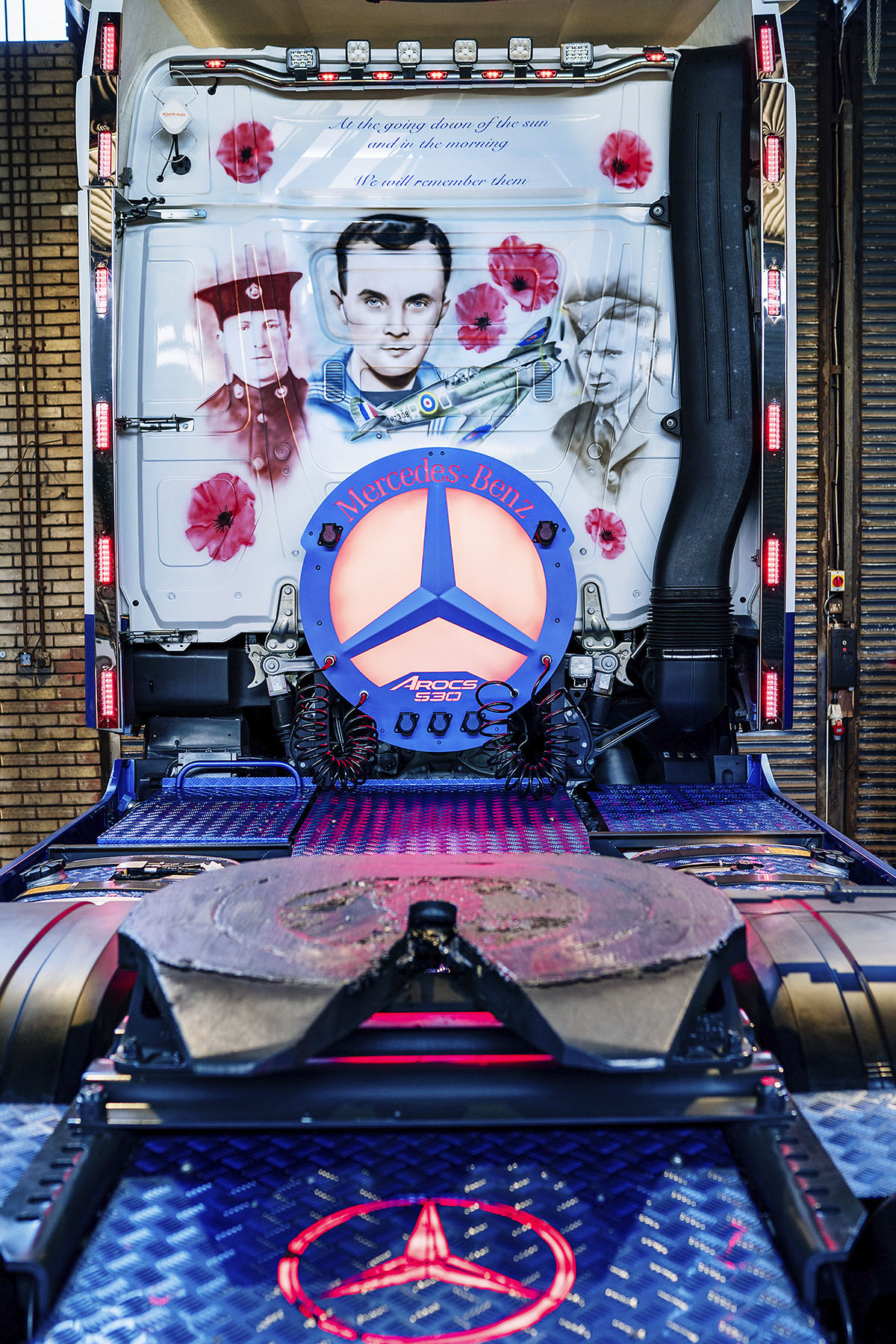 “I’m a proud Welshman, so the three feathers appear on all of my trucks,” explained Mr Rees. “As a huge fan of Grand Prix motor racing I’d usually choose an F1-themed design, but given that each of us had a grandfather who served in the Forces during the Second World War, I thought it would be appropriate on this occasion to mark the 75th anniversary of victory in Europe in a very personal way. My wife and I are both delighted with the result, as is Paul.”

Mr Rees went on, “The Arocs is a first-class piece of kit, and very cost-effective to run. Our trailers are heavy – unladen we’re still grossing at upwards of 22 tonnes – so the trucks are working hard all the time.

“Yet they’ve proved to be robust and reliable enough to cope. They’re also well-liked by our drivers, who can be away all week, which is why we endeavour to make their cabs as comfortable as possible.”