You are here: Home / First Drives / Weekend roadtest : VW Up 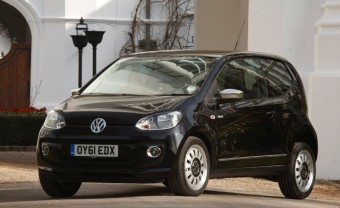 The only way is Up, says Volkswagen.

Up is approximately the same size as the old Lupo, but it’s a very different story inside to the former city car and VW believe it will have more appeal, including to the daily rental fleets.

Rory Lumsdon is VW UK product manager and said, “We have never really had a car like the Up, which packs a lot of technology and features into a city car size, and I believe with the trend towards downsizing for economy and tax reasons that the Up will appeal to more buyers than our previous small cars like Lupo and Fox.”

Officially, VW say they anticipate about 10pc of all Up sales which begin with the three door now and will gain the five door in September, to go to fleet buyers and principally daily rental companies, but Mr Lumsdon says he thinks it will be a higher percentage. “I think it will be at least 10pc,” he added.

CEB senses objects ahead and slows car from 19mph One key option which could influence the take up by fleets is the introduction of the city emergency brake. 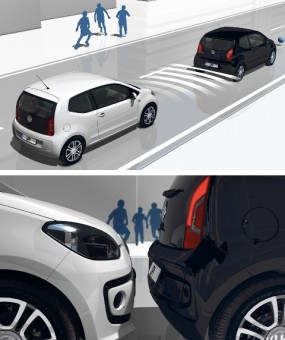 This uses a sensor and camera operated system which works in conjunction with the car’s ABS and ESP to read the road up to ten metres ahead and activate the brakes if the driver is four metres from a hazard and not acting to avoid an accident by steering, braking or depressing the clutch (see left).

It is intended to prevent the typical nose to tail tap in slow moving traffic up to 19mph but which can cost several hundreds of pounds to repair.

It costs a little over £200 fitted but models with the system drop into the lowest 1E insurance category, making the basic model the cheapest to insure in the city car sector.

The Up range runs from about £8,000 to £11,200 and is based on the latest three-cylinder 1.0 engines with 60 or 75PS outputs, emitting as little as 96gkm, and only five-speed transmission will initially be available but a automated manual will appear at the end of this year and VW says a plug-in electric version is coming in about 18 months. A GTi concept with manual six-speed gearbox has also been shown.

At launch there will be the TakeUp, MoveUp and HighUp with the mid-model accounting for about 60pc of sales and the others 20pc each, but there will also be UK special edition UpBlack and UpWhite with enhanced trim and chrome-effect detailing.

Apart from the city emergency braking system another option available is a highly sophisticated ‘Maps & More’ mobile Personal Infotainment Device which clips above the central console and can be used to organise navigation, telephone, information and entertainment. Lastly with the options, a spare wheel is an extra cost for UK market. At 3,540 mm in length, 1,641 mm in width and 1,489 mm in height, the Up is one of the smallest four-seater cars available. Its overall length consists of short body overhangs and a long wheelbase of 2,420 mm. Boot space rises from 251 litres to 951 litres when the two back seats are folded down.

Up will not let you down with disappointment.

For its size it is a surprisingly roomy car and despite the lack of two rear doors for now, it gives reasonable access into the two rear seats as well. Boot space is ok for shopping but you would have to drop the back seats to take most other items.

At the other end, the 60PS engine is expected to be the more popular and it does a good job of keeping up with traffic if you travel alone and without much weight but press it to perform and the engine lets you know how hard its working and it can run out of breath on long or steep ascents.

I also thought the entry level TakeUp with 60PS engine and thinner wheels and tyres tended to skip around more over bumpy bends and surfaces than the MoveUp and HighUp tested, and the latter and special edition UpBlack definitely went better with the 75PS engine pulling them along.

Having said that, both 60 and 75PS models tested were comfortable with good seats and excellent visibility, a good turning circle and smart appearance both inside and out.