Dacia cannot seem to put a wheel wrong in Britain.

The Renault-owned Romanian-made models have become very popular in the UK, bringing new car qualities with proven engineering within the budgets of those who thought they could only afford a second-hand car.

Middle of the series is the cross-over Sandero Stepway, a soft-roader hatchback. The Dacia Sandero Stepway is a small range but carefully packaged and priced to have big appeal.

That business plan certainly seems to have paid off and the brand became the UK’s fastest selling new series with over 17,000 models sold in 2013, winning plaudits for its price and extremely slow depreciation.

Some 3,770 sales were the Stepway models and there are only four versions from under £8,000 to almost £10,800 based on Ambiance and Laureate trim levels with 90bhp 3cyl 900cc petrol or 90bhp 4cyl 1.5 diesel engines, both using five-speed gearboxes.

Our Ambiance 1.5dCi is one of the best sellers in the series and it is surprisingly refined for a car costing about £9,000. 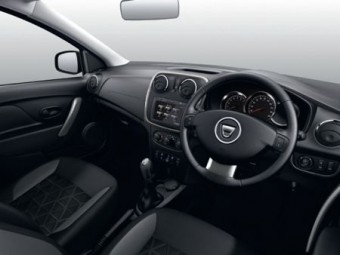 You can see the Renault touches in many places and particularly in the secondary controls and instruments’ display, but that’s not to decry it in any way, but to endorse it.

The engine is a solid performer with a 90bhp output from just under 1500cc and because it’s an 8v head the noise level is low when accelerating. Performance is modest through the gears but it pulls well and it will happily settle down on the motorway limit. The straightforward engineering means it can hit 50mpg without any problem but that’s a long way from the claimed 70mpg plus combined.

I found the clutch progressive and the gearbox direct in action, the brakes slowed it without too much effort but the steering was a little too vague for my liking and the turning circle was big in urban use. Secondary controls are straightforward, come immediately to hand and operate smoothly while the simple instruments are clear if not marked in detail. There is a modern connectivity system for the audio as well.

I also liked the uncomplicated heating and ventilation controls, with reasonable directional control, output and temperature selection. Oddments room is fairly good inside the cabin both infront and back and the boot has a capacity running from 320 to 1200 litres depending on seat configuration.

Access was simple, room inside reasonable and the seats were well padded in the front, less so behind, with fairly good adjustment on the front pair to cope with users preferences. 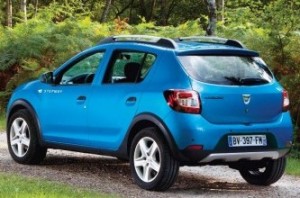 Visibility was good to the front and sides, marginally restricted over the shoulder when reversing and you cannot get parking sensors. Lights and wipers were adequate for the available performance.

Noise levels were generally modest with road rumbles being ever present and the engine only became loud under harsh acceleration in lower gears. Wind and other mechanical noises were very low.

While the Dacia Sandero Stepway is not going to be a game-changer so far as the top sellers are concerned it is going to make an impact among those who previously thought they could afford only a second-hand car, and buyers looking for a second car to fulfill a family’s duties. They are unlikely to be disappointed.