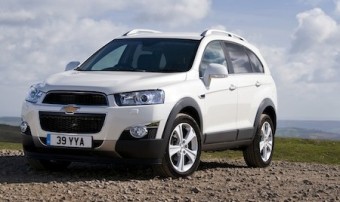 It comes with a new look and an incredible near-80 years behind the Chevrolet Captiva.

Now made in South Korea the Captiva can trace its origins to the Chevrolet Suburban launched in 1934 to US buyers as the first SUV.

Then it was a people carrier version of a Chevrolet pickup truck which went on to do sterling WW2 service as a troop carrier, but today’s equivalent Captiva is every inch a more comfortable and peaceful car.

The new Captiva for 2014 introduces several changes to the rear and front of the vehicle, including new LED tail lamps, angular chrome exhaust tips and a remodeled bumper.

It has a lower bumper, a new grill mesh as well as restyled foglamps and new 18-inch alloy wheels further enhance Captiva’s road presence if not its comfort.

As a four-cylinder turbo-diesel 2.2 litre it hauls nearly 1900KG without occupants so it is not smart off the line but once underway it moves well. 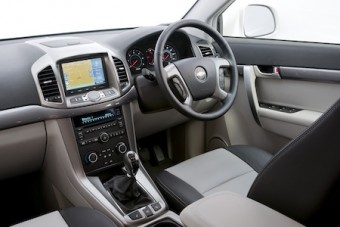 The well weighted clutch eases gear selection which is positive and the ratios pull it along with good acceleration for overtaking and a long legged gait on the motorway, so you can achieve good economy if you do not press it hard through the lower gears.

The brakes are also nicely balanced between effort and assistance and slow the car quickly and undramatically but the steering is a little lifeless and the turning circle is not good for town use.

Secondary switches are sensibly placed close to the wheel, on the spokes or adjacent on the fascia and the basic instruments were fairly large and clear if not calibrated in detail.

Heating and ventilation worked well with straightforward controls and had good direction, output and temperature control for a big cabin.

The oddments space was very good throughout and it would be a family favourite with all the nooks and crannies in the cabin. The boot and its twin-tailgate were easy to use and capacity gradually went up from a bags-only 97-litres with all 7-seats used to 1577-litres with the front pair only in use.

Access for driver and passengers was good. There is a slight step up into the cabin about it, but its not difficult and some may find that preferable to dropping down into a seat, and once settled the room is very good, particularly behind the front seats but its more of a kids’ car in the rearmost pair of seats.

The seats’ shape is good to locate on twisting roads and support on bumpy tracks with powered adjustment on the front pair as well.

It soaks up road shocks quite well only the deepest holes jarring the chassis and while it rolls a bit around tight turns it still has reasonably good road-holding.

There is more road noise than before and under pressure the four-cylinder engine is boomy, but ease off the throttle or settle down on a main road or motorway and it’s quiet.

Visibility is good to front and sides but with a high tail its less clear to the rear and the reversing camera comes into its own when manoeuvring and helped by the sensors back and front. Lights and wipers are good for country dwellers.

It is well equipped with CD/ Bluetooth and MP3 services, but we could not get a mobile phone to work with the system.

For the money it is very good value and it is a roomy car with reasonable ride quality, a feeling of security, and quite good performance.

It may not be the first SUV which comes to your mind when looking for this type of car but it deserves to be considered as one of the better family friendly models which will not cost you an arm and leg.