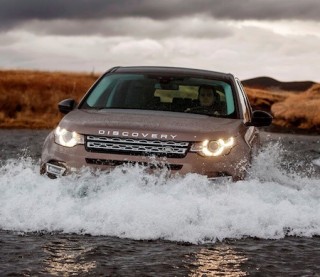 The all-new Land Rover Discovery Sport, has generated close to 4,000 orders in a few months as it replaces the popular Freelander.

They are priced from £32,395 to £42,995 with a choice of SE, SE Tech, HSE and HSE Lux specification levels with manual and automatic transmission options.

Richard Gavan, product manager for Land Rover said, “We had planned a UK first full year sales target of 15,000 units but we now might need to adjust that figure.  This is a new area of the growing compact premium SUV market for us and there is clearly a demand for the 5+2 seating configuration”.

In essence the Discovery Sport mid-sized SUV with its 5+2 seating is a replacement for the Freelander which even in its run-out year in 2014 achieved around 15,000 UK sales.

Richard Gavan added, “50% of those ordering the new Discovery Sport have previously been Freelander owners and there are a high proportion of the remaining customers coming from other SUV brands but now down-sizing to the Discovery Sport because of its 5+2 stadium seating design.

“Currently around 70% of buyers are choosing the 9-speed automatic gearbox option and most customers are opting for the top HSE and HSE Lux levels of equipment”.

This aged Euro 5 unit has CO2 emissions of 162g/km for the manual models and return an official 46.3mpg. All Disco Sport models currently have permanent four wheel drive.

With its aluminium and steel construction consequently making the vehicle lighter the Disco Sport is said to be 14% more efficient in terms of fuel economy, CO2 emissions and overall performance than the Freelander.

Land Rover executives stayed tight-lipped at the media launch about what additional versions or the expected change mid-year to the more efficient 2.0-litre turbodiesel called eD4, presumably not to put off the eager buyers now placing orders.

This new engine is one of the new Jaguar Land Rover’s own Ingenium Euro 6 units.  Production has started at their new Wolverhampton engine plant and it will have CO2 emissions as low as 119g/km with a fuel economy figure of around 47mpg.

It will be offered in both two and four wheel drive forms.  The new Jaguar XE mid-sized saloons out soon will be the first to be fitted with this new engine.

Land Rover said the Discovery Sport is the only premium 5+2 seating SUV in its compact segment.  Its main competitors could be the ‘lifestyle’ Range Rover Evoque but more realistically the new BMW X3, Audi Q5 and the Volvo XC60.

The Discovery Sport is all-new although it does share some components with the Evoque and indeed the outgoing Freelander.  It uses a revised platform of that used for the Evoque but it has a new multi-link rear suspension system which doesn’t intrude into the body compartment leaving room for the rear row of two occasional seats.

The stadium seating design sees the middle row of three seats able to slide fore and aft, they have 60-40 split fold down seat backs and are mounted 50mm higher than the front seats to improve  visibility for passengers. The rear twin occasional seats fold out of the floor and offer a further 20mm elevated seating position.

Boot space with all the seats raised is 194-litres with a load spacious 830-litres with the third row down and an even more impressive 1,698-litres with all the second and third row seats folded.   The roofline of the Disco Sport is higher than that of the Evoque, especially from the mid roof forwards so there is more headroom.

With an overall length of 4,590mm the new model has a wheel in each corner design to maximise approach and departure angles for serious off-road travel. It has a best in class 600mm wading depth and a maximum tilt angle of 27-degrees.   There is the usual slightly rising waistline and rounded contours making it less angular than the Evoque.

The high strength steel and aluminium bodyshell will support more than 4.5 times the vehicle’s weight if a roll-over situation should happen.  The clamshell bonnet, roof and tailgate are all made of aluminium.  There is a full suite of airbags plus dynamic stability control, electronic traction control, anti-lock brakes, emergency braking brake lights and lane departure warning.  All these safety features have combined to give the vehicle a Euro NCAP five-star safety rating.

Under the skin there are longer travel suspension units for better off-road capabilities than the Evoque and the higher ground clearance also helps. The all wheel drive system uses a revised version of Land Rover’s accomplished Terrain Response system.  The driver uses a series of pictograms to select the mode most suitable for off road driving.

The hill descent control software has also been revised over that used for the Evoque to provide a more accomplished and controlled descent down very steep tracks no matter whether it is rocks, mud, snow ice or sand.  The descent speed can still be adjusted via the cruise control function.

Inside there is a much higher degree of plush finish and equipment than that found in the Freelander.  It now feels and looks similar to the Evoque.  The fascia panel now houses a new 8-inch touchscreen which includes many of the vehicle’s operating systems but thankfully items such as the heating and ventilation system have their own controls.

There are six or seven USB charging points depending on which specification is chosen. Gear selection for the automatic transmission models has the usual rotary turret selector.

With the same 190hp engine the Discovery Sport is around £2,000 more expensive than the equivalent Freelander models they replace but the newcomer has much more equipment as standard. It has more new technology in the body construction and design and the on and off road performance is significantly superior.   A top spec Evoque five door, five seater is around £2,000 more expensive than the Discovery Sport. 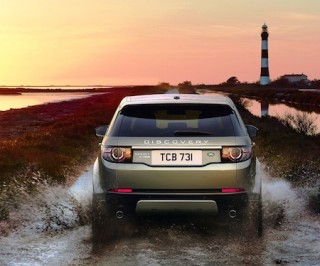 The media test drive based at the Heritage Motor Centre at Gaydon next door to Jaguar Land Rover’s ever-expanding is where the Discovery Sport was born.

We had the opportunity to drive the new model both in six-speed manual and 9-speed automatic transmission form both on and off road.

The same 2.2-litre SD4 190hp turbodiesel unit with 420Nm (310lb ft) of torque from 1,750rpm is currently the only engine option.  The test car specification was the likely most popular HSE.

The on-road test routes were around The Cotswolds using A/B main road,  typical conditions for most owners although it is likely with the more modern and upmarket styling plus the seven seat design, many of these Discovery Sports will become family vehicles so expect to see them on the school-run both in the country and in-town.

In terms of outright performance the Discovery Sport is not yet going to live up to its ‘Sport’ badging. It is more about styling in the first instance but dig deeper and it’s an accomplished all-rounder.

It is roomy, it handles quite well although the longer suspension travel does allow some cornering bodyroll during enthusiastic driving.  The tough suspension does reduce the familiar ‘loping’ ride and body bounce over undulating road surfaces normally associated with Range Rover models.

The firm suspension with its aluminium components does allow significant road noise and vibrations to enter the cabin on poor road surfaces. The steering offers good feedback despite its new electronic set-up. For an on/off road vehicle the blend of toughness and comfort is a good compromise.

Whilst the design, the 5+2 seating, the specification and the on-road handling impress the SD4 engine is now showing its age compared to competitor units so the new generation of Jaguar Land Rover engines will be welcome.

Mated with the smooth 9-speed automatic gearbox the existing engine works reasonably well together with the gearchanges smooth but a little slow.

Where the engine shows its age is with the relatively high emissions.  With the auto gearbox it is 166g/km of CO2 (162g/km for the manual).  This means VED road tax £290 for the First year rate reducing to £205 after that.

Benefit-in-Kind company car tax is currently rated at 29%.  The manual version has VED at £180 for every year and BIK tax is 28%.  But all these figures are likely to change upwards after the Budget in March.

Off-road is where the new Discovery Sport, to coin a phrase, shows all its compact SUV competitors a clean (or dirty) pair of heals.  It doesn’t have a low ratio transmission like the bigger Discovery but it has better ground clearance than the outgoing Freelander and current Evoque.

Overall the new Discovery Sport has many more good points and characteristics than bad. As its initial sales demand shows there is an eager buying audience out there who are not going to wait for the more modern engine option to come along.

Against:  Pricey, some former rural Freelander owners might prefer a more work-horse specification version, not as fuel and CO2 efficient as most of its compact SUV premium brand rivals, new cleaner CO2 engine not available as yet.