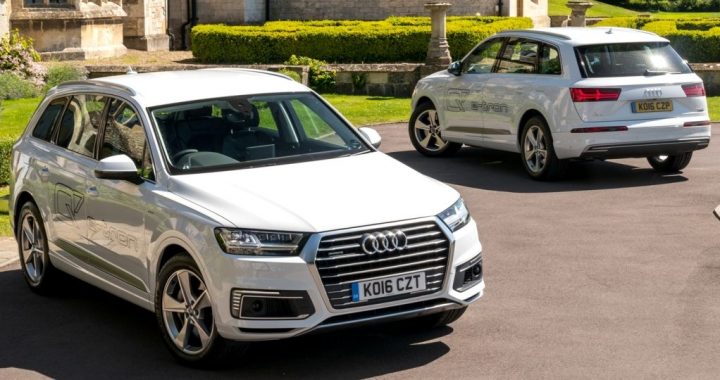 These are the latest two new variants to be added to Audi’s fast-growing range of models which has gone from 17 to 44 in 15 years resulting in record global and UK sales. In the UK quattro technology has been on sale for 37 years and it now accounts for a third of Audi’s 166,000 annual new car sales. Quattro all-wheel drive models range from the A1 supermini hatch up to the Q7 huge SUVs to the R8 V10 supercar.

On the subject of sales for these two new additional Q7 models Anna Chudley, Audi UK’s Q7 product manager, said at this week’s media launch that last year they sold 3,700 Q7s in the UK and she expects the high performance SQ7 to account for around 15% of future Q7 sales mainly to retail customers.

As for the Q7 e tron diesel/plug in electric, that version is expected to account for 10% of future sales, mainly to fleet and business customers because of its low CO2 emissions of 48g/km which results in a low 10% Benefit-in-Kind tax for company car users. It is also exempt from VED road tax and it is free from the London Congestion Charge. However it is not eligible for The Government’s Plug-In Vehicle Grant due to its high price.

Order books are now open with UK deliveries starting in August for the Audi SQ7 high performance engine technology showcase model with an on-the-road price from £70,970. This huge seven-seater SUV is claimed to be the UK’s fastest and most powerful diesel SUV on the market.

Essentially the supercharger provides immediate engine acceleration response before one turbocharger kicks in for the low to intermediate power boost and the second turbo continues engine boost from the intermediate to high level speeds. Turbo-lag is a thing of the past with this supercharger twin-turbo system so expect to see other manufacturers adopting similar setups in the future.

The SQ7 uses a new 4.0-litre, V8 TDI turbodiesel unit producing 435hp but more importantly a huge 900Nm of torque from only 1,000rpm. It is mated with an 8-speed automatic transmission with quattro all-wheel drive.

As for fuel economy, it is not as punishing as the performance or vehicle weight suggests. Officially the Combined Cycle figure on the standard-fit 20-inch alloy wheels is 39.2mpg and on my brief test drive this week covering the winding but traffic-busy Cotswold A roads the figure was 31.9mpg which given our enthusiasm for trying the acceleration experience was impressive. The CO2 figure is190g/km so VED road tax is £500 for the First Year rate and £270 thereafter. Company car drivers will pay 37% Benefit-in-Kind tax.

Standard specification includes S-specific interior goodies such as Audi’s highly praised Virtual Cockpit where the sat-nav and other info can be displayed in the instrument binnacle right in front of the driver as well as on the centre display screen.

Extra cost options include the Driving Dynamics Sports Pack priced at a weighty £5,700 but given the performance potential this option includes the electromechanical active roll stabilisation function which reduces high speed cornering body-roll and worth the extra money. It also includes a sports differential and all wheel steering. Other key optional equipment includes 22-inch alloy wheels, carbon ceramic brakes, matrix headlights and a Tour Pack which includes Traffic Jam Assist and night vision. As a guide to what a fully specced SQ7 might really costs, our test drive model, priced at £70,970 on the road, but with loads of the showcase options it ended up with a price-tag of £95,160. A very high price for very high performance.

All these handling options, either standard or extra cost, gave an impressive performance of ride quality from the air suspension, superb body control from the active roll bars and precise cornering from the four wheel steering all coupled with a music to your ears exhaust soundtrack and more power under your right foot than you are ever likely to legally need. Expensively brilliant if a powerful large SUV is your requirement!

Against: Other less expensive Q7 models will satisfy most needs.

Again order books are open now for Audi’s first plug-in hybrid Q family model with deliveries starting in August. Audi does of course have their A3 e tron plug-in family car model but the big five-seater Q7 e tron is aimed at a completely different market

The Q7 e tron is priced from £64,950 but add in the extra cost options and our test car weighed in at £78,505 on-the-road. Because of its high price the Q7 e tron is not applicable for The Government’s Plug-In Vehicle Grant but it is exempt from VED road tax, with its low 48g/km of CO2 emissions the main buyers – company car drivers, will pay only 10% Benefit-in-Kind tax and the London Congestion Charge is free.

The UK sales growth of plug-in hybrids has been significant due to their low business-user tax costs with the less prestigious than the Q7, but more affordable, Mitsubishi Outlander PHEV leading the way with almost 12,000 registrations last year. Audi’s aspirations for their Q7 e tron plug-in hybrid SUV are far less with around 370 UK sales in a full year, mostly to business-users looking to reduce their company car tax costs.

Unlike the rest of the Q7 large SUV models the e tron is a five instead of seven seater with some of the rear space taken up by the by the lithium-ion battery pack. However with five seats in use the boot still offers 650-litres of luggage space with the load area increasing to 1,835-litres with the rear three seats folded down.

To get to the crux of the Q7 e tron’s technical features, a 3.0-litre, V6 TDI turbodiesel engine is mated with 94kW electric motor driving the quattro 4WD system through an 8-speed auto gearbox. The combined power output is 373hp and 700Nm of torque from 1,250rpm. Officially on standard 19-inch wheels the Combined Cycle fuel economy is up to 156.9mpg with a CO2 rating as little as 48g/km.   An electric power only driving range is up to 34 miles with an overall driving range combining diesel and electric power of up to 820-miles.

On our media launch test drive over 40 miles using Cotswold winding but traffic busy roads the figure was 72.8mpg. The battery power ran-out after 21-miles and then the vehicle used mainly the diesel engine coupled with the electric power harvested during the over-run periods.

It is a fact that plug-in hybrids whether coupled with petrol or diesel engines perform best for fuel economy only if they are regularly charged. Long runs with no charging during a journey reduce the mpg figures to those of conventional non-hybrid powertrains. The battery can be fully charged in as little as 2.5 hours via a public charge point or domestic wallbox but it will take eight hours using a normal domestic socket.

There are selectable three driving modes. The EV mode is electric power only, Hybrid auto mode decides the most appropriate use of power between diesel and electric and in Hybrid Hold mode the system stores the electric power for use at a later time in the journey when it would be more appropriate. The vehicle generally starts off silently in electric mode with the diesel engine coming into play when the driver presses the accelerator more firmly.

The performance in terms of speed is impressive with 143mph and a zero to 62mph acceleration time of 6.2-seconds. In whatever mode the electric to diesel power transition is seamless as are the gearchanges through the 8-speed auto gearbox and of course there is quattro all wheel drive for added grip. For even more refinement take the £2,000 adaptive air suspension system which irons out the firm ride.

UK sales of plug-in hybrids have increased rapidly but they still only take a small proportion of new vehicle sales and Audi’s conservative predictions mirror this with the Q7 e tron. For most Q7 owners the conventional 3.0-litre TDI turbodiesel versions will save around £15k on the purchase price, still return over 40mpg but road tax will cost £185 instead of nothing and the all-important company car tax is much higher at 30%. The Q7 e tron has its advantages but at a high initial cost.

Against: Much higher purchase price over Q7 3.0-litre TDI models, only five seats as opposed to other seven-seater Q7s, not as agile in handling due to the added weight of its electric motor and battery pack, regular battery charging must be used to obtain the official fuel economy figures.