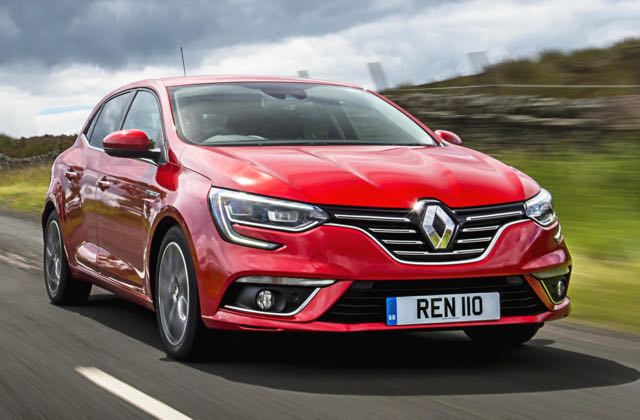 The all-new Megane is the fourth generation stretching back over 20 years with global sales of 6.5-million.

The new five door hatchback range currently has 25 variants in its line up but that will be extended next year with the arrival of diesel-electric hybrid powered versions in addition to the current petrol and diesel powered models.

Current prices for the new models start at £16,600 and rise up to £25,500 through six trim and equipment levels. These are Expression+, Dynamique Nav, Dynamique S Nav, Signature Nav, GT-Line Nav and GT Nav. There is the choice of four engines, two petrol and two diesels. The petrol units are a 1.2 TCe 130hp turbo with manual and EDC dual clutch auto transmissions and a 1.6-litre 205hp turbo unit with EDC auto for the GT Nav model. The turbodiesel units are a 1.5-litre dCi 110hp with manual or auto transmissions or a 1.6 dCi 130hp unit with a manual gearbox. Both diesel units have low CO2 emission levels of just 96g/km so they are free of VED road tax and will be the high mileage company car driver’s favourite with a tax levy of 19%. Officially the 110hp unit will return 76.4mpg and the 130hp unit 68.9mpg.

When Renault describes the Megane as all-new they mean it is built on a new generation platform shared with the recently introduced and highly praised Kadjar mid-sized SUV and the two ranges are built at Palencia in Spain.

Unfortunately I couldn’t attend the UK Media launch for the new Megane due to a holiday so when a test car arrived on my driveway my first thought was ‘how you have grown’.

It looks far more substantial, more impactful yet still retaining an athletic side profile with its rising waistline, lower roofline and longer wheelbase but with its lower height the new Megane actually look wider and more muscular.

At the front is the new Renault family face with its very prominent diamond-shaped logo flanked by sleek headlight and daytime running light units.   Sculptured door panels lead to the tailgated rear end with a shallow rear window with a spoiler above. The rear body is pinched at the hips over muscular haunches making it look wide. As is commonplace rear light units traverse both the rear corner body panels and bleed into the tailgate giving a continuity of styling lines.

Although the Megane might be all-new its competitors remain old foes. These include the sector sales leading Ford Focus followed by the VW Golf, Vauxhall Astra, Peugeot 308, SEAT Leon, the roomier Skoda Octavia, Nissan Pulsar, Honda Civic, Kia Cee’d and Hyundai i30. 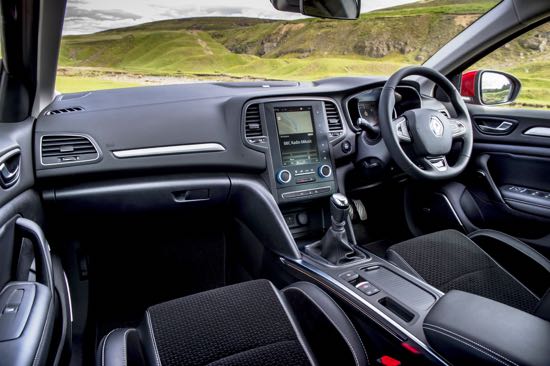 Move up the range and the main interior visual feature is a central touchscreen, 7-inch for the Dynamique Nav and an 8.7-inch tablet style screen for the next grade up which was my test version – the Dynamique S Nav. Controls of the sat-nav, radio, Bluetooth and heater system fan speed are all embedded within this touchscreen which is not always user-friendly.

Whilst the heater temperature controls remain knobs, to turn on the air-con and adjust fan speed settings requires the touchscreen to be used as is the selection of the radio channel. I am not a fan of these most-used controls being operated via the touchscreen; they are not convenient and I could say safe because it requires the driver’s eyes to be taken off the road. It is not just Renault that has de-cluttered their facia layouts this way. It looks good but in reality it’s not user-friendly.

In addition to the ample standard specification items personalisation options are big selling points these days and the new Megane has lots of these extra cost items including hands free parking and blind spot warning at £500 or adaptive cruise control with distance warning for £400. 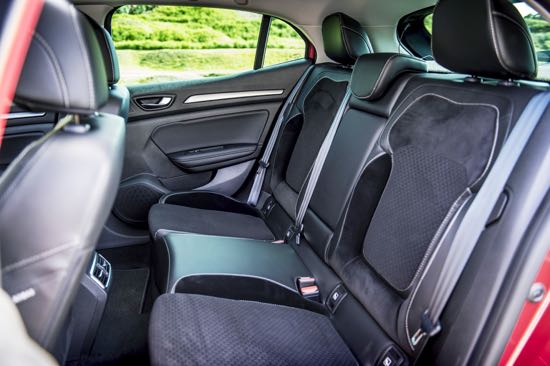 As for space the Megane’s front interior is relatively roomy but rear seat legroom is not plentiful given the seemingly longer wheelbase. However seat and ride comfort is generally good. Visibility to the rear and rear quarters is restricted by the shallow depth tailgate window and high headrestraints of the outer rear seats. The Dynamique S Nav gets an increase in wheel size to 17-inch ones so there was more road noise than is ideal.

Roadholding was generally good but not needle-sharp or as agile as a Ford Focus or VW Golf as an example for this particular version. The steering offered consistent weight at all speeds but lacked feedback especially at higher speeds on winding country roads. In the handling department the new Megane just didn’t feel very athletic; it was well balanced but not as agile as the best in its class.

The engine of my test car was the 1.5-litre dCi, four-cylinder turbodiesel which develops 110hp with 260Nm of torque from 1,750rpm. This is the unit most likely to be chosen for business and fleet use because of its low 96g/km of CO2 emissions. This means no road tax costs for any driver and company car users get away with 19% Benefit-in-Kind tax.   Officially this unit with its six-speed manual gearbox will return 76.4mpg, impressive on paper but in reality some way from that figure. I did see 70mpg on the computer at one stage but a mixture of motorway, country roads and in town driving returned a real-life average of 62.7mpg. 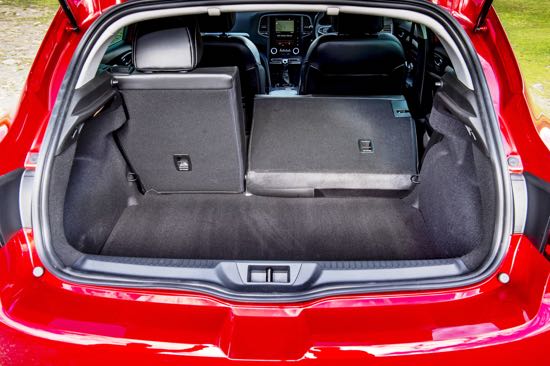 The engine might be frugal with low running costs but it is not that rewarding to drive. It gets the job done and serves the purpose for high mileage business and fleet drivers. Acceleration from standstill is on the lethargic side but it brightens up edging towards mid range speeds.

The rpm for torque delivery from 1,750rpm just seems too high by today’s standards even for small capacity petrol and diesel direct injection turbocharged engines.

With its gearing for optimum fuel economy and low emissions the performance lacked low down grunt making it stodgy to drive anywhere but open roads. Once underway the experience improved and it cruised happily at 70mph. The six-speed gearbox worked well enough but the gearchange was not as precise as some competitor models and occasionally a wrong gear could be selected. Top speed is officially 116mph and zero to 62mph takes 11.3-seconds so performance is modest but remember this is a fuel economy model. Other versions will be livelier. 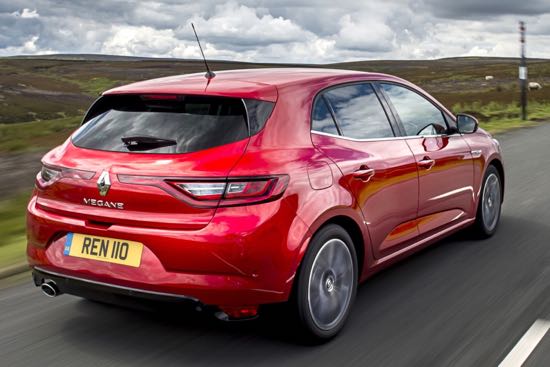 Overall the new Megane looks bigger, bolder, has more kerb appeal, is well equipped and with the 1.5 diesel engine frugal on fuel with low tax costs. It just lacks that driving fluidity, composure and agility of a Focus or Golf and the interior space of an Octavia.

Against: Cramped rear seat legroom, restricted rear/rear quarter visibility, lacks the sharp handling and driving dynamics of the class leaders, too many functions are operated via the touchscreen.