It’s been a tough 12-months and there are still issues for the motor industry, but BMW is putting on a brave face and rolling out its newest models, writes David Miles.

Falling UK new car sales due to the repercussions of Brexit, potentially less investment in new cars built in the UK, higher interest rates, demonisation of diesel, tit-for-tat trading tariffs, the autumn implementation of new fuel economy and CO2 emission testing and various safety related product re-calls taking place, car manufacturers need to keep their show-on-the-road despite reduced PR and Marketing budgets as they tighten their financial belts and face up to tough-trading in future.

So keeping calm and carrying on, BMW held a driving event showcasing some of their latest new models and included the launch of the second generation X4 Sports Activity model range with the publicity build-up to promote advance orders for the new 68-plate registration month of September. Worryingly for UK/European customers the X4 is built at BMW’s Spartanburg Plant in the USA so the trade war and tariffs could have supply and price implications. 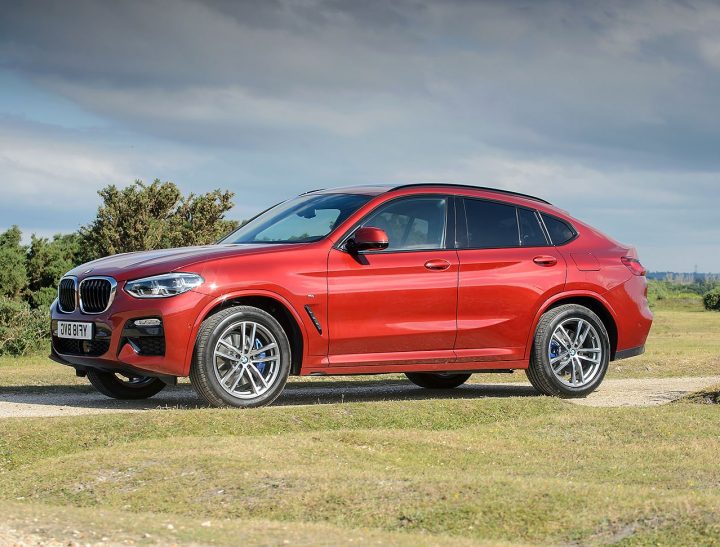 The BMW X4 is a coupe version of the X3 mid-sized Sports Activity Vehicle as BMW calls its SUVs.

This is the second generation and as before each version has xDrive all wheel drive technology with automatic transmissions as standard. It’s bigger than previously but has a lower ride height.

James Thompson, Head of Medium Cars for BMW UK said traditionally they sell around 2,500 X4s in the UK each year, that’s about one X4 for every five X3 versions.   The 20d M Sport X4 will take the majority of sales at up to 1,800 units with 500 units of the M versions and up to 300 units of the 30d being the likely sales split between the models. Around 70% of X4 sales will go to retail customers slightly more than the X3.

Styling wise the X4 over the X3 has a more aggressive sports appearance and inside the X3 the standard specification is higher and the quality is said to be even more premium with a higher number of leather upholstery combinations.

As a like for like price guide the best selling X4 20d M Sport variant is around £3k more than the equivalent X3 version reflecting the technical changes, sharper sportier handling and higher ‘premium-ness’ as BMW calls it.

It looks good inside and out, it’s visually more athletic than the X3 but probably not so practical for family duties. It could be termed as a move to fashion over function.

For this BMW range review we’re looking at the new 2 Series 225xeM Sport Active Tourer, a petrol/electric plug-in hybrid sports MPV which is a crossover between a ‘soft’ Sports Activity Vehicle with 4WD and a compact five seater MPV also with 4WD. But before that we take a brief look at other new BMW models. 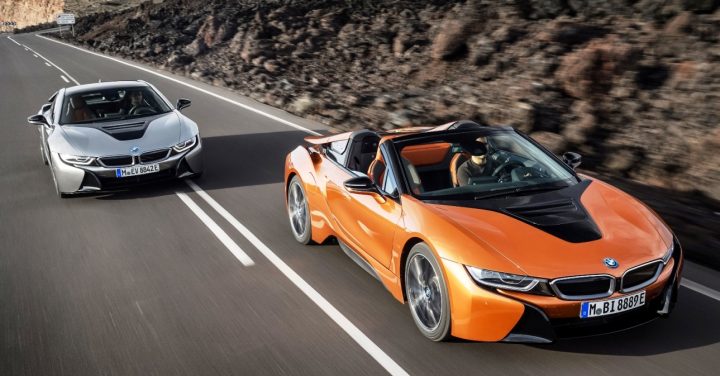 The i8 in its 2018 guise in both 2+2 Coupe and newly added 2-seater Roadster Convertible are the flagship models of BMW’s eco ‘I’ sub brand range which includes the i3 electric and petrol/electric range extender models.

Deliveries to UK customers will be in the autumn at prices from £76,000 and a hot ‘M’ version will follow as will Convertible and four door Gran Coupe versions. Priced at £112,735 the i8 Coupe and the Roadster version at £124, 735, both use a carbon-fibre reinforced plastic passenger cell. For 2018 it has received a styling facelift and various performance updates.

The combined power output for the 2018 models is 374hp, 12hp more than the previous model and for good measure there is 570Nm of torque. The eco-friendly e-Drive setting givers a pure electric driving range of 34 miles for 2018 models, before it was 22-miles and the maximum electric power only driving speed is 75mph

With a deep throaty growl from the three-cylinder turbo petrol engine and the whine from the electric motor the soundtrack is unique.  The handling is sharp, the ride firm, it’s not very roomy in the rear, its stunning to look at with low running costs but all that comes at a significant purchase price. 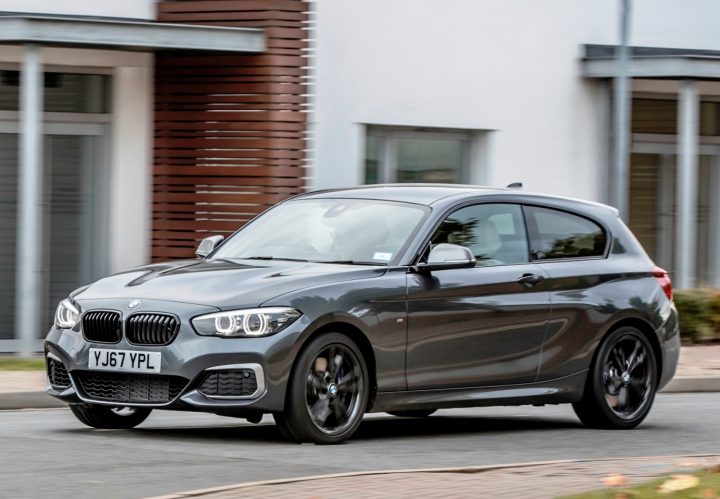 This is the ‘baby’ of BMW’s iconic M range of high performance versions of their traditional  mainstream hatchback, saloon, coupe and SAC/SUV ranges.

The M140i is the top performance member of the 1 Series three and five door Hatchback range and it is available with both body styles.

There is no fancy 4WD for this pocket-rocket, just a big engine up front and drive to the rear wheels with near perfect balance front to aft.  Traction at the rear wheels might prove variable in wet weather driving conditions. Top speed is restricted to 155mph with zero to 62mph taking just 4.8-seconds.

For most people, given our disgraceful road surfaces and huge traffic congestion driving conditions we have to endure, the practicalities of owning and running a car with these costs seems pointless but ‘desirability’ is a priceless commodity. 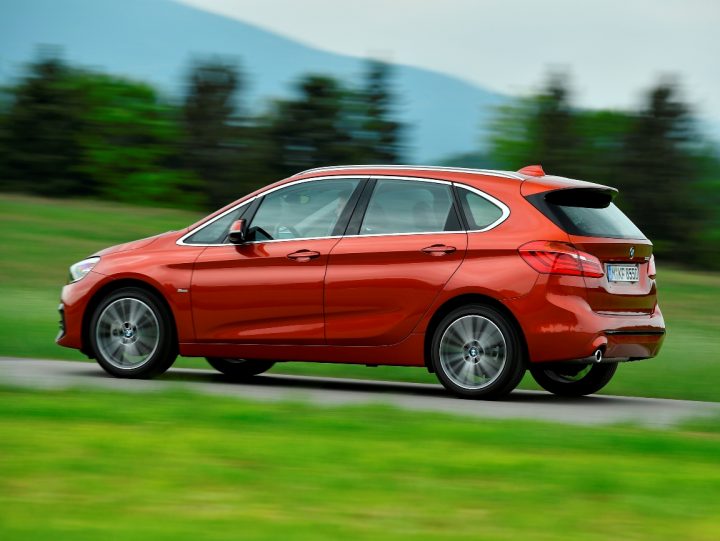 Gran and Active Tourers are classed as MPVs, the Active Tourer being a five-door five-seater, the extended wheelbase Gran Tourer five-doors and seven-seats.

No matter what the configuration, MPVs have suffered in sales as customers moved to the more fashionable SUV/Crossover style models.

The 2018 BMW 2 Series Active and Gran Tourer ranges see new generation and more efficient engines introduced, a sportier front end exterior design, tweaks to the interior layout and functionality, more equipment and a PHEV plug-in petrol/electric hybrid version for the Active Tourer with an electric range of up to 28-miles.

Gareth Griffiths, BMW UK’s Product Manager for small cars said this year both the Active Tourer and Grand Tourer will each achieve around 5,000 sales. The petrol/electric plug-in hybrid version will take around 1,500 sales but that figure is more or less doubling each year.  He added that by 2025 BMW will have 20 models which are either electric or petrol/electric hybrid and of that number 12 will be pure electric. 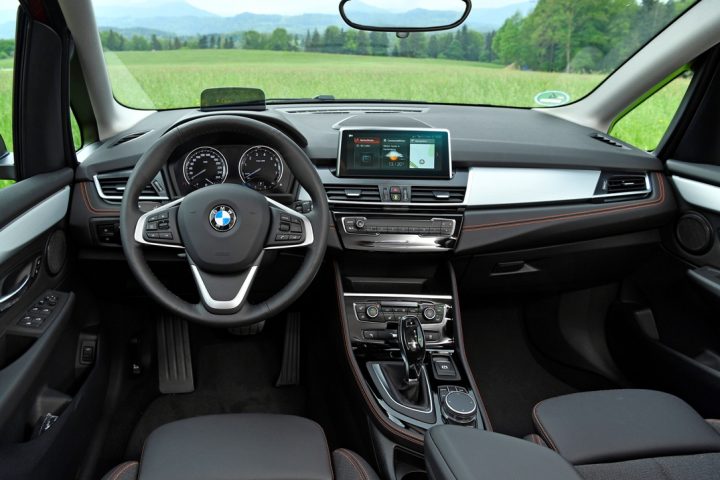 The  225xe powertrain consists of two components, the 136hp three-cylinder engine TwinPower Turbo technology unit of 1.5-litres with drive to the front wheels via a six-speed Steptronic auto transmission.

The electric side of proceedings is handled by an 88hp electric motor driving the rear wheels. The combined power from the two units delivers 224hp and peak torque of up to 385Nm.  Acceleration from zero to 62mph takes 6.7-seconds, with a top speed of 126mph.

The battery can be fully charged in 2.5-hours from a domestic power socket but using a BMW i Wallbox that reduces the charging time by one hour and the vehicle can also capture top-up electric power through regenerative braking.

During my very brief test drive using Cotswold country roads the real-life fuel economy figure was a poor 38.8mpg due to the fact that the driver before me used all the battery power for his test drive.

So my driving experience had to make do mostly with the power from the 1.5-litre engine which also supplies power for the electric motor so the two power sources work in harmony. But when the battery is in a discharged state there is no electric-only drive to maximise fuel economy – hence my poor test drive fuel consumption figure.

It is imperative to obtain something close to the official Combined Cycle figure that PHEVs such as this 2 Series Sport Active 225xe uses mains electricity charging facilities.

With its slightly elevated seating position there is the feeling of being in a popular SUV type vehicle and the large windows give really good all round visibility.  The quality and upgraded higher specification is definitely ‘premium brand’ as it needs to be considering the price.  With five seats and 468-litres of boot space it is a family-friendly vehicle.

With the 40/20/40 split rear seats folded the 225xe model has a load area that can be extended to 1,350-litres, but it’s compact enough for town or city use yet versatile enough for longer runs accommodating all the family and their trappings. The interior space, hybrid power and low taxes will also appeal to business chauffeuring, minicab and taxi operators, especially in London where it is Congestion Charge free. 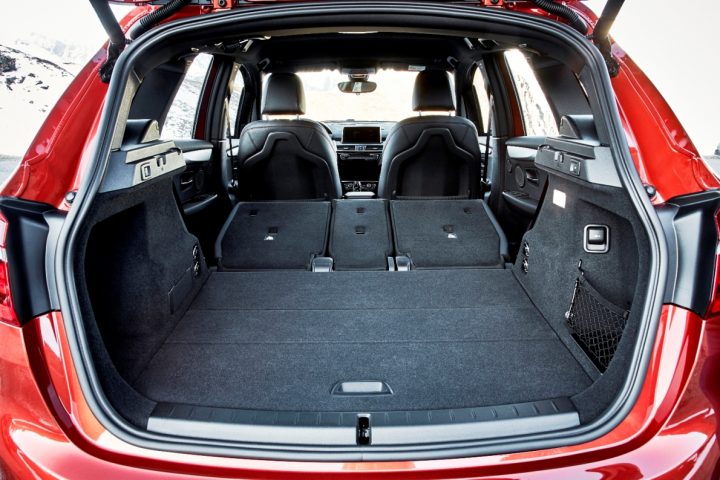 With its new BMW sports front end styling and elevated seating, the vehicle is a reasonable alternative to the now too very commonplace SUVs.  Its exclusivity will appeal and its electric/hybrid element does have some tax saving advantages whether it’s in the hands of fashion conscious school-run mums or hard working and highly taxed business users.

Against: Pricey, real-life fuel economy suffers if the plug-in electric charging facility is not used.