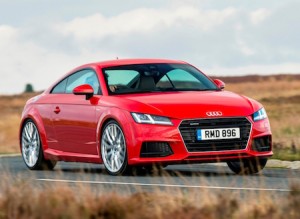 As I write this road test there was no shortage of emails arriving in my Inbox from car manufacturers announcing record sales for the UK’s new registration plate month of March.


With 492,774 new cars registered in March it has been the best sales month this century and marks 37 months of consecutive growth as the country comes out of recession.

In March Audi took an even firmer grip on the premium brand new car sales market and created yet another UK sales record for themselves with 44,919 registrations.  This is no one-off sales boom; it follows year-after-year record sales growth in the UK with another one looming this year.

Last year they remained the top selling premium car brand in the UK with 158,829 registrations, well ahead of BMW, Mercedes-Benz, Jaguar and Lexus. Impressively they are now the fifth best-selling car brand overall with Ford at the top followed by Vauxhall followed by Volkswagen and then comes Nissan.

Audi have recently sold their two millionth new car in this country since sales began in 1965.

Now in their 50th year of being in the UK market, appropriately today Audi has a range of 50 models whereas at the start of the century they had just 17.

At the end of last year Audi launched the all new TT range with the Coupe and already this year they have added the TT Roadster convertible models plus the TTS higher performance Roadster and Coupe versions.

The TT range is not a ‘volume’ sales line-up with ‘only’ around 7,000 units in total sold each year due to the limitation of supply so in the UK demand always outstrips availability. The UK is the largest global sales market for the TT.

The two-door, 2+2 Coupe accounts for 80% of all TT UK sales with the top S-line level of specification being the choice of 70% of customers and around 25% of customers will choose a quattro all-wheel-drive model.

I have just had a timely driving spell with the TT Coupe 2.0-litre TFSI quattro S-line   with its 230hp turbocharged direct injection petrol engine and 6-speed S-tronic dual-clutch automatic gearbox.  The on the road price is £35,335  for this top of the range 2+2 seater Coupe but  the range starts off at £29,860  for the same engine but without quattro traction and with the less expensive Sport trim.

For those owners who want diesel power the range includes a 2.0-litre TDI engine with 183hp and front wheel drive with Sport and S-line spec levels with prices starting from £29,770.

Throughout the successive generations of the TT great care has been taken for the image of the model to evolve rather than for each version to change dramatically in terms of its appearance. The latest TT follows the same styling theme, the same rounded contours but with more edgy and sculptured styling lines and a R8 styled front face makes the Coupe look more muscular. Whereas previous models had a bias towards female drivers Audi thinks the bolder design of the new versions will shift the bias towards men.

The hybrid body construction of a space frame and the VW Group’s latest MQB midsized platform uses a blend of steel and lightweight aluminium so the new models are an average 50kg lighter than the last generation.  With uprated and cleaner engines, a lighter body weight, the latest TTs have more power, more torque, lower CO2 emissions and improved fuel economy. The specification has also improved, especially the high-tech cockpit which is based around a 12.3-inch high resolution LCD screen that completely fills the instrument binnacle and replaces traditional analogue dials and it includes the sat-nav display.

The 2+2 Coupe is 4,177mm long, almost the same length as its predecessor but the wheelbase is 37mm longer but in truth that has not added very much in terms of rear seat space for adults.  The load area has gone up by 13-litres to 305-litres and can be increased to 712-litres by folding the rear seat backrest forwards. 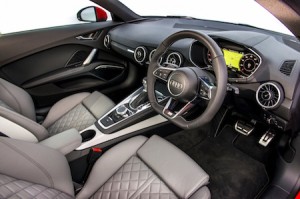 The cockpit design has evolved but it is still fully targeted at sports driving. The rear seat space is tiny and access limited, it always has been. It is a beautifully crafted interior, really high quality all things that Audi are really good at.

There are now circular ventilation vents which cleverly include the controls to adjust temperature, air distribution, air conditioning and all the other functions which normally clutter up the console and fascia. In addition there is the brilliant 12.3-inch, high resolution LED screen positioned right in front of the driver where conventional instruments usually are. Drivers can choose between two displays.

In classic view the speedometer and rev counter are in the foreground but in infotainment mode the virtual instruments are smaller. The space that becomes free provides ample and clear room for other functions and information or warning signs but in particular the navigation map.

This new info panel is brilliant and just part of a new generation of fascia and control panel designs which no doubt will be rolled out to other Audi models and to other VW Group brands in the future.

The Euro-6 compliant 2.0-litre, four cylinder direct injection turbocharged petrol engine has a healthy 230hp output but it is the 370Nm (273lb ft) of torque from only 1,600rpm that gives this quattro model a real push of responsiveness when needed. 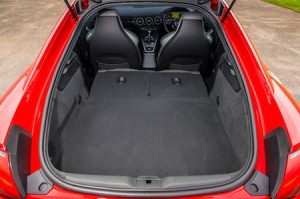 It is fast on the open road, responsive for overtaking slower traffic and also remains compliant in traffic. Of course the quattro all wheel drive with its variable torque split between the front and rear wheels always gives the optimum amount of grip and is especially welcome during high speed cornering. The CO2 emissions are 149g/km so VED road tax is £145 every year and company car tax 24%.

For the first time the quattro function has been integrated into Audi’s Drive Select System so the various modes offer the driver the opportunity to ‘tune’ the level of traction and dynamic handling. This new system also has an ‘efficiency’ mode which I selected most of the time. Basically it has a fuel-saving freewheeling function so when the driver eases off the accelerator the drivetrain goes into ‘coasting’ mode.

During slowing down, coming up to traffic lights or roundabouts the Coupe coasts with the engine ‘detached’ from the drivetrain. Touch the accelerator or brake and the engine/gearbox/quattro system reengages immediately.  Coasting is illegal but not with this system as the TT Coupe always remains in gear.  It’s clever and it seems to work.

With the VW Group’s highly rated MQB modular platform underpinning the latest Audi TT the handling is impeccable and well balanced even in the less costly front wheel drive layout. Add in the more muscular latest incarnation of the iconic TT design, plus quattro drive, new fuel efficient engines and the glorious high-tech interior and Audi has another sales winner.