More than two in five of the world’s all-electric and plug-in hybrid vehicles are registered in just 25 cities, says the International Council on Clean Transportation.

ICCT’s report finds that these 25 metropolitan areas are home to nearly 1.4 million of the world’s 3.1 million battery-electric passenger vehicles that were in use at the end of 2017, according to the Advanced Mobility Project.

The same markets accounted for only 12% of global new vehicle sales last year because of incentives to go green.

China accounts for about half of all battery-electrics on the road and has 11 of the 25 top cities. Shanghai ranks first with cumulative sales of 162,000 EVs, followed by Beijing (147,000) and Los Angeles (143,000). Other U.S. cities making the list include Detroit, New York, San Diego, San Francisco, San Jose and Seattle and in Britain it’s led by London.

Two Norwegian cities had the highest percentage of battery-electric vehicles relative to total new vehicle sales last year. Bergen led the way with 50%, and Oslo had 40%.

ICCT notes that the leading cities—especially those in China—tend to offer significant incentives to encourage EV ownership. On average, these cities also have 24 times as much charging infrastructure as the rest of the world. 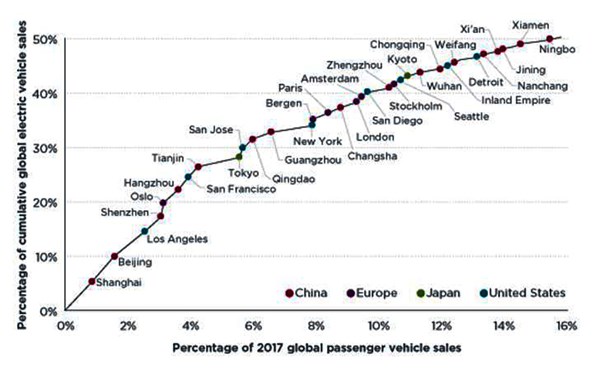