Welsh rallying successfully returned to the forests, with Matt Edwards scoring a sensational victory on the 2021 Nicky Grist Stages at the weekend. 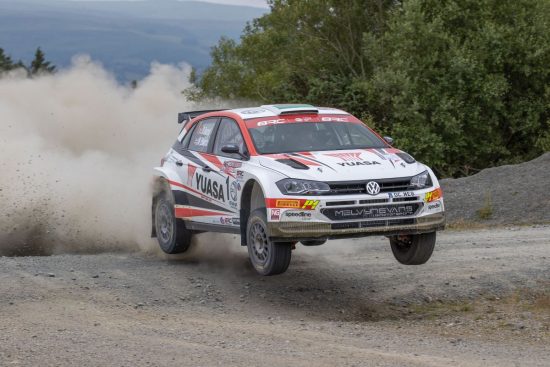 Matt Edwards and Darren Garrod took their Yuasa Rally Team Volkswagen Polo GTI R5 to a hard fought victory on the 2021 Nicky Grist Stages, and in doing so take the lead of the British Rally Championship.

They were fourth after the opening stage, and overcame a morning misfire and brake bias issues to finish five seconds ahead of Tom Cave/Dale Furness (Ford Fiesta Rally2) after two loops through Llyn Login, Monument, Halfway and Crychan forests and all 44 stage miles had been completed.

Osian Pryce/Noel O’Sullivan (Volkswagen Polo GTI R5) finished just a further seven seconds behind in third, as the top three pulled away from the rest of the field. 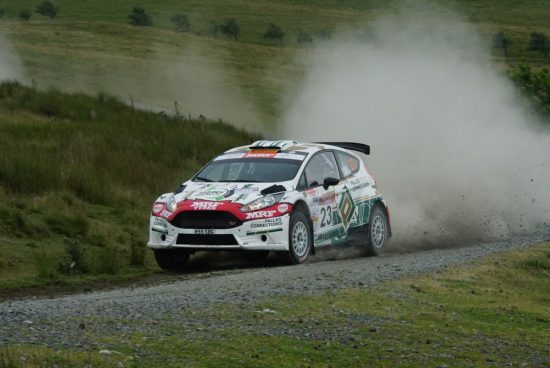 An equally impressive performance came from Callum Black/Jack Morton (right) who won the Interclub section in their Ford Fiesta R5. They were top point scorers in both the MRF Tyres BTRDA Rally Series and Pirelli Welsh National Rally Championship.

Unlike the National section, the Interclub competitors could not do a recce, yet the 586 Sports team crew finished an incredible seventh overall.

Indeed, big congratulations must go to the 170 crews who took part – most of which hadn’t rallied for eighteen months, and many for a lot longer than that.

And in addition to the competitors, it was Welsh rallying itself that was a big winner – as the Nicky Grist Stages was the first major forestry rally in Wales for 17 months, with Covid-19 compliant measures built into the fabric of the event.

These included paperless documentation and results, minimising the number of people on the stages and in the service area, moving the service area from the Builth Wells RFC pitch to the Royal Welsh Showground, operating strict one-way systems and social distancing procedures, not having a start or finish ceremony and the distribution of hand sanitizers, courtesy of Nicky Grist Motorsports.

The relaxation of Welsh government guidelines meant that the event was given the go ahead at short notice, and Quinton Motor Club rose to the challenge by organising everything in just 10 weeks.

The 2021 Nicky Grist Stages could not have run without the support of everyone involved, including the competitors, teams, officials, all eight major championships and their sponsors, Motorsport UK, BTRDA, MOD, NRW, Powys County Council, Builth Wells Town Council, Dyfed-Powys Police, a record number of volunteer marshals who kept everyone safe and secure and to the spectators who heeded the pleas to say away and watch the action lived streamed on the internet instead.

“We’ve had a great day and we’re absolutely over the moon with the win,” said Matt Edwards.

“It means a lot to come out on top against such a quality field. It’s been one hell of a fight all day and we haven’t been able to give away a tenth. It was a fantastic effort by the Melvyn Evans Motorsport team to fix the few issues we had with the car at service and then we tried to stick it in the trees a few times on the final stages, but it all came good in the end!”