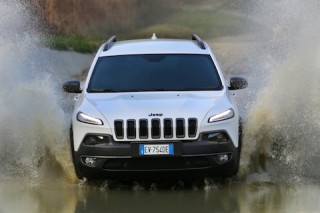 Even though the all-American Jeep brand, Chrysler and Dodge are now owned by the Italian Fiat Group, the Jeep retains its long standing  sports utility “go anywhere, do anything” policy.

At the international press launch of the fourth generation Jeep Cherokee, held at Fiat’s Balocco Proving Ground near Milan in Italy, the American executives of Jeep, whilst still keen to emphasise the products legendary 4×4 capabilities, had to concede that the latest model has a design which gives the vehicle more finesse.

It makes the Cherokee more suitable for global markets such as Europe where SUVs had become more sophisticated, although the new Cherokee will still be built in the USA.

American Chris Ellis, head of the Jeep brand for Europe, Middle East and Africa said “Although the Jeep heritage covers over 70 years the new global market Cherokee, D-segment sized SUV has been designed to meet the requirements of European customers.  They demand for their vehicles improved quality, higher safety, more refinement, the latest technologies, more fuel efficient engines with less CO2 emissions with improved road driving manners but still want Jeep’s legendary off-road abilities.”   European sales of the new Jeep Cherokee, five door SUV begin in left hand drive markets in April and UK dealers will start selling them from the end of May for deliveries in June this year. UK prices have yet to be confirmed but Damien Dally, head of Jeep UK said, “The entry level 2.0-litre, 140hp turbodiesel model with two wheel drive will start from around £25,500 and the top spec 2.0-litre 170hp turbodiesel version with the ZF 9-speed automatic transmission with a higher grade active 4WD system will cost around £35,000. 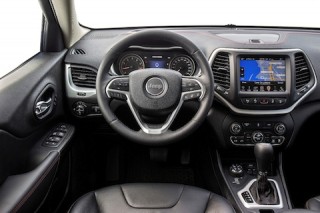 For the UK market there will be three main levels of equipment,  Longitude, Longitude+ and Limited but there is available a  hard-core Trailhawk level which offers more off roading capability, higher ground clearance but initially it is only available with a 3.2-litre, V6, 272hp petrol engine.

Dally added, “The UK will receive around 2,000 units of the new Cherokee this year and we should grow the sales to around 5,000 in a full year. I expect 75% of customers to come from the retail sector with the remaining 25% being fleet, business user-chooser and some Motability customers. But with the 139g/km of CO2 emissions available from the 140hp 2WD model the fleet take-up could increase due to the lower Benefit-in-Kind tax level.”

He said, “Around 65 to 70% of UK buyers will choose a 4WD model and 60% will want the new 9-speed automatic transmission.  Currently Jeep has 57 dealerships covering 70% of the UK but by the end of 2015 the network will be expanded to 72 outlets giving us coverage for most of the country.”

Instead of the slab-sided, boxy shaped styling of the previous generation Jeep Cherokees the new fourth generation versions use a platform and monocoque construction rather than a body on chassis design. With the use of lightweight, high strength steel this makes the D-segment SUV more agile both on and off-road.

There is a new version of the iconic seven slot Jeep ‘Waterfall’ grille which uniquely these days is part of the sculptured bonnet. There is the usual SUV gently rising high waistline and the side doors are deeply sculptured to break up the past slab-sided appearance and it gives a visual sense of airflow around the vehicle. 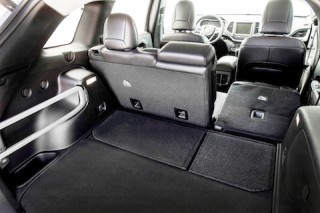 At the rear a hefty tailgate gives access to a 412-litre boot which also has an extra 70-litres of space under the load floor.

Inside the Cherokee there is Jeep’s usual high level of standard specification.  The build quality and the feel of the materials look much better and the layout of the instruments and controls has obviously been influenced by European competitor rivals such as the Honda CR-V, BMW X3, Audi Q5, Land Rover Freelander and the Mitsubishi Outlander.  The high-line fascia with its leather-look stitched vinyl trim looks well padded and has a chunky appearance. So do the seats with large bolsters which provide good support and there is a thick leather trimmed steering wheel.  Much emphasis has been placed on reducing noise intrusion into the vehicle with better insulation and the use of acoustic glass and that was very noticeable.

Although we have yet to see and drive UK specification versions, the standard equipment will be Jeep’s traditional high level. Following the European market trend there are lots of extra cost options so the vehicle can be personalised.  Much emphasis is placed on safety features and these include seven airbags, rollover mitigation, ABS with off-road function, forward collision warning, adaptive cruise control, lane departure warning, blind spot monitoring and rear cross-path detection.  There is also a full range of over 100 accessories produced in conjunction with Mopar and these include an in-car dog kennel and an outdoor awning for humans.

The on-road handling and been vastly improved over previous models with an independent front suspension and multi-link rear set up which in conjunction with the passenger car platform works really very well, even with the large 18-inch wheels.  The power steering is now electronically controlled giving sharper response but feels heavy and the feedback is still lacking. The new Cherokee still feels on the lazy side for handling, more cruiser than bruiser seemingly it’s more about comfortable travel.  The suspension easily mopped up the impacts the worst of rural Italian roads provided during our test drives and off-road the suspension took away the worst of the shocks.  Where the Cherokee scores over most European rivals is the length of suspension travel it has so chassis articulation off-road is impressive.  It might not be as sharp in the on-road handling department as some of its European competitors but it maintains Jeep’s legendary off-road abilities.

To meet customer’s demands the Cherokee has a wide range of drivetrain options.   The 2.0-litre, 140hp turbodiesel is available with two or four wheel drive and a 6-speed manual gearbox.  The 4WD system uses front wheel drive most of the time but automatically reverts to 4WD when conditions for extra grip, both on and off road, dictate.  The 2.0-litre 170hp turbodiesel is fitted with ZF’s new 9-speed automatic gearbox as standard and again can be chosen with 2WD or 4WD systems.  In addition to that there is a choice for 4WD versions of Active Drive 1 which is a single speed drivetrain with no low ratio transfer box. Limited spec models have Active Drive 2 which does provide low-range. There is also Active Drive 3 which adds a rear differential lock but is only available on the future Trailhawk model.  The various Active Drive settings are operated through a turret style control switch mounted on the centre console. 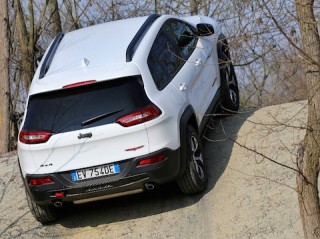 Driving both diesel units over the hilly rural Italian roads there really wasn’t much to choose between them. Both are relatively quiet and responsive.  The 6-speed manual gearbox matched with the 140hp diesel unit gave smooth changes with well spaced ratios. The new 9-speed auto with the 170hp engine did not have the same seamless gearchanges as the similar ZF box used in the Range Rover Evoque but the close ratios are selected quickly so there is no power or momentum loss between gearchanges.

The new Cherokee takes the middle ground in their line-up. The larger Grand Cherokee was refreshed last year and UK sales are up by 64%. A smaller B-segment Renegade range will come early 2015, Compass continues until the end of this year and hard-core Wrangler three and five door models are special order.

Globally Jeep sold 731,000 vehicles last year, the fourth record year in succession so the future looks brighter for the Jeep brand under the patronage of the Fiat-Chrysler partnership.

Against:  Not as sharp in the handling department as the Range Rover Evoque or BMW X3 for instance, more leisurely cruiser than bruiser for on-road driving.