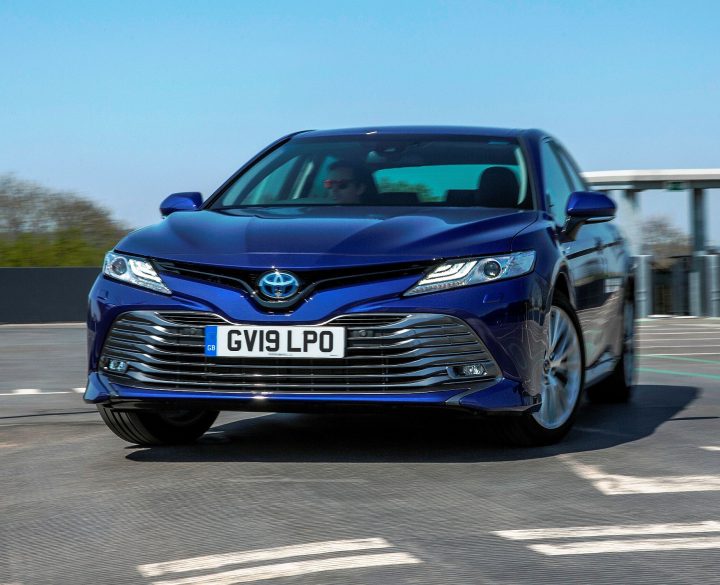 Increasing demand for hybrid vehicles has prompted Toyota to return the Camry mid-sized four-door saloon back into its UK line-up after an absence of 15 years.

This is the all new eighth generation Camry, it went on sale first in 1982 but the seventh generation versions were not sold in the UK.

Although Toyota class the new Camry as a mid-sized saloon at 4,885mm in length and with very classy styling inside and out, ample interior space with excellent rear legroom it is more of an affordable executive saloon.

In fact the Toyota New Global Architecture (TNGA) and new K platform together with its 2.5-litre Toyota Hybrid self-charging powertrain and CVT auto transmission are the same components used under the Lexus banner for their ES 300h executive saloon.

Whereas the Lexus 300h has a wider range of specification levels, the Camry in the UK is offered with just two – Design priced at £29,995 and Excel at £31,295 considerably less than its Lexus ES 300h counterpart which is priced from £35,150. 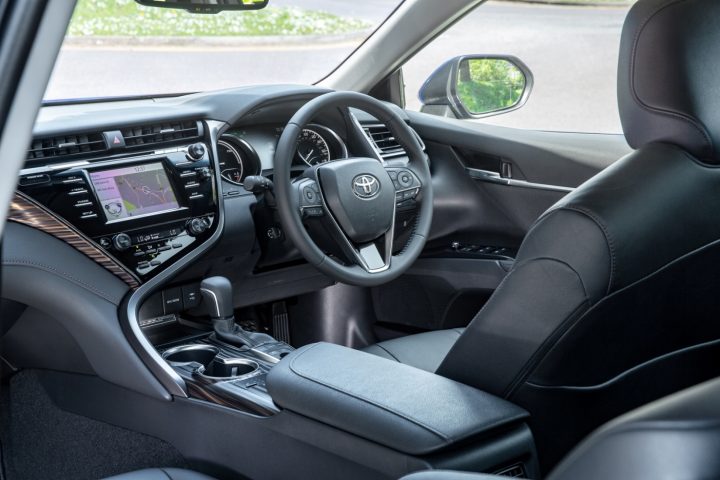 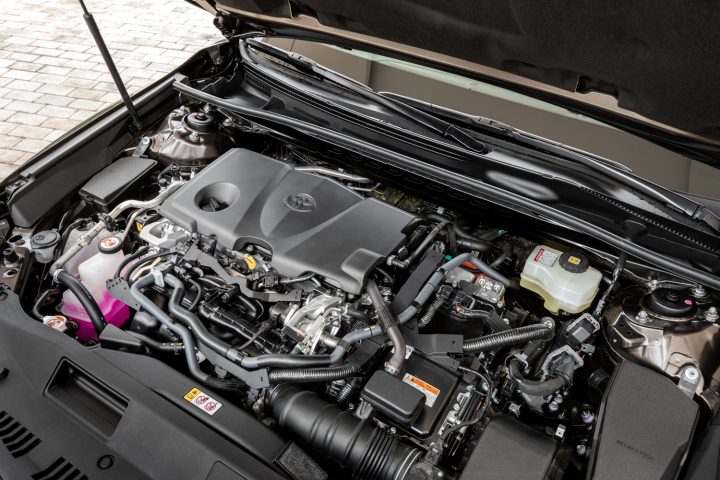 Both Camry versions use the same powertrain. It is a self-charging petrol-electric hybrid system using a 2.5-litre, 4-cylinder 16-valve DOHC petrol unit with dual VVT-i valve timing mated to an electric motor/generator. Drive to the front wheels is through the usual CVT auto transmission which has six simulated gear-change steps.

Total power output is 215bhp with the new WLTP Combined Cycle fuel economy varying between 50.4 and 53.3mpg depending upon spec level and alloy wheel size. Top speed is 112mph and zero to 62mph takes 8.3-seconds. Those all important tax gathering CO2 emission range between 98 and 101g/km again depending upon wheel size.  And that difference adds up to marginally higher tax costs.

Styling wise the kerb appeal is one of a quality saloon, but more conservatively styled than its Lexus competitor which has more sharp and edgy styling lines. But the Camry has sculptured lines aplenty running from front to rear. At the front is a slim upper grille either side of the Toyota badge but in the front bumper section is a wide and deep grille with its air intake slats presenting a bold and classy face. 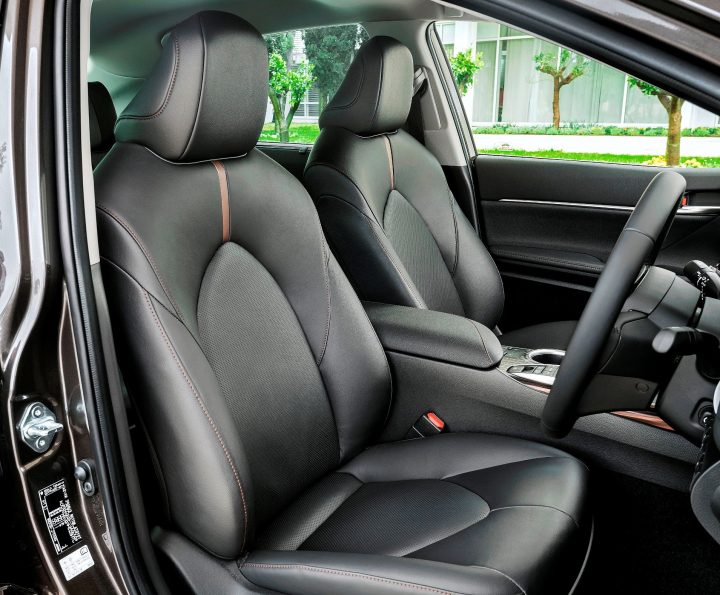 The profile has a slightly sloping coupe roofline which doesn’t greatly reduce the interior rear headroom and the long wheelbase of 2,825mm gives plenty of rear seat legroom for three adult passengers. The rear seat backs fold to extend carrying space if required. At the rear of the body there are wide haunches giving a muscular appearance and the boot lid has a stylish raised spoiler edge to it, again classy in its application.

The boot is very large and the new double wishbone rear suspension doesn’t reduce boot space by having the need for component intrusion into the boot area.  The boot space is also not limited with having to accommodate the battery pack which is located under the rear seats and that helps lower the centre of gravity. That placement and the rear suspension design provides rear end stability through cornering allowing this large saloon to feel well planted as well as providing a very compliant ride quality.

Inside at the front is a twin cockpit style layout with well laid out instruments although the centrally positioned infotainment touchscreen could be larger. Thankfully though the heating, ventilation and other most-used controls are not accessed via the touchscreen but via simple easy to see on the move controls and short-cut buttons.

The fascia design has a nice character to it and much more welcoming and involving than the rather sterile layout of the new VW Passat competitor as an example. The quality looks and feels high and I found it a very pleasant and user-friendly driving environment. It will be an easy to live with driving environment for company car executives or retail users who just like to have refined space to travel in over long journeys.

That isn’t to say that for some enthusiastic drivers the new Camry will be as agile or as sharp handling as say similar sized models from the German premium brands. It’s more on a par with the Ford Mondeo, Vauxhall Insignia, Peugeot 508 and the larger Skoda Superb which is perfectly acceptable for most users and being a Toyota be assured it will be reliable. 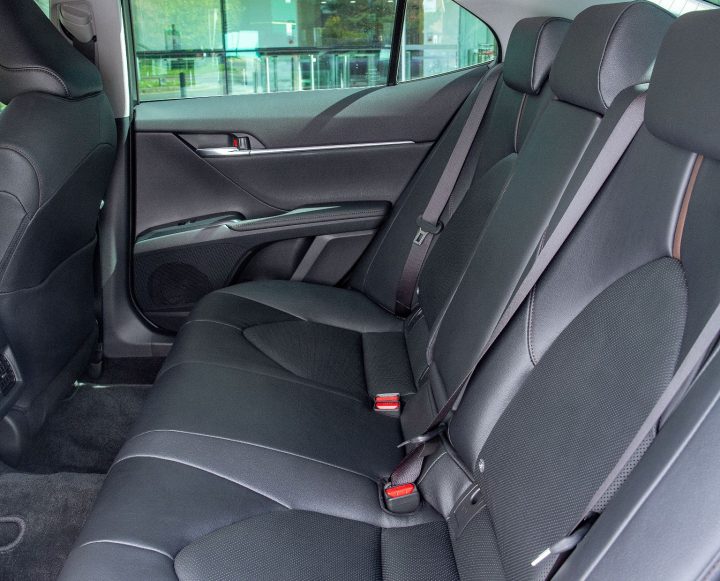 As for powertrain performance; ‘efficiently sound’, sums it up in two words but I need to expand on that. What self-charging petrol-electric modern hybrids offer is go on any journey at any time with no range anxieties, good real-life fuel economy and relatively low CO2 emissions for such a large car. Unlike the more expensive plug-in hybrids or pure electric cars there are no charging cables to mess with either.

My new Camry test model was the Excel version priced at £31,295 which when you consider its technology, size and  low tax costs in the executive car sector is somewhat of a bargain  and a good replacement for the now defunct Toyota Avensis models.

The 2.5-litre petrol engine has low noise intrusion most of the time with the electric motor automatically providing some of the propulsion. Where it gets noisier is with the usual petrol-electric hybrid system using a CVT auto transmission. Hard acceleration results in a higher engine droning noise level which the bodyshell soundproofing cannot hide. In Normal or Sport driving modes a medium touch of the accelerator will send the engine revs soaring and the noise output is not relative to any great increase in speed. 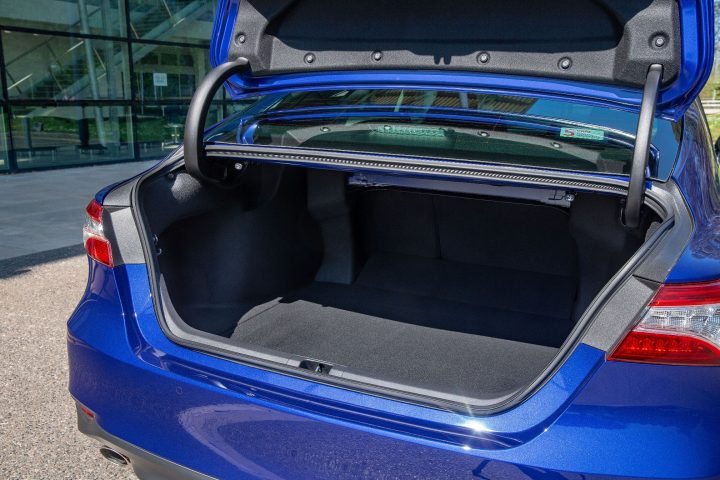 This petrol electric hybrid system has a total power output of 215bhp but with the electric motor that provides 221Nm of torque immediately so the initial acceleration response is brisk even driven in Eco mode and I found it performed quite happily in Eco mode all the time.

The electric motor assists the petrol engine  and actually runs the car during low speed driving and during de-acceleration on the overrun when the engine cuts out, all seamlessly done of course. There is also an EV mode where the car can be run of electric power only for short distances. Electric energy capture is done under braking and overrun driving conditions.

During motorway or dual carriageway cruising there are less opportunities for energy capture and during that type of driving the fuel economy was a regular 44mpg. However once I returned to driving on winding country roads and in urban traffic conditions where there are more opportunities for braking and overrun energy capture, the figure increased rapidly to 55.8mpg. Overall for my week of driving the real-life figure was 52.3mpg, well in keeping with the official WLTP figures of 50.4 to 53.3mpg. 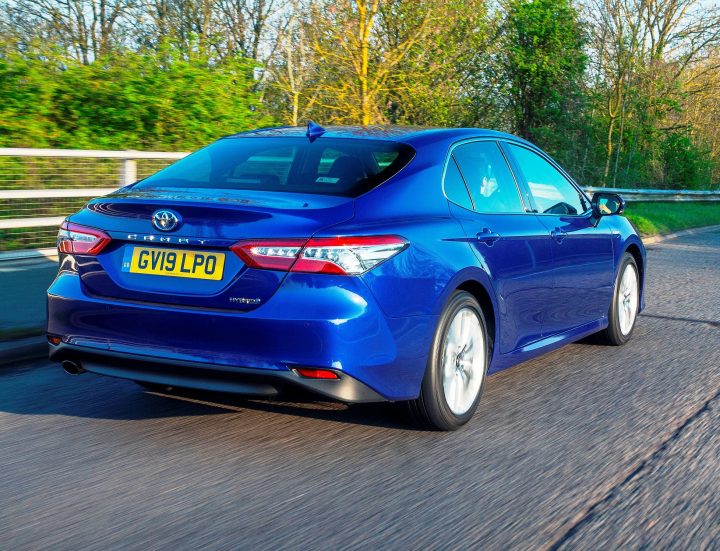 The new Toyota Camry with its self charging petrol-electric hybrid system is a very good example on why such powered cars continue to significantly outsell pure electric and plug-in electric hybrid passenger cars not least of all because they are cheaper to buy or lease but because they are just easier to use anywhere at any time with no fuss and still with considerable tax savings.