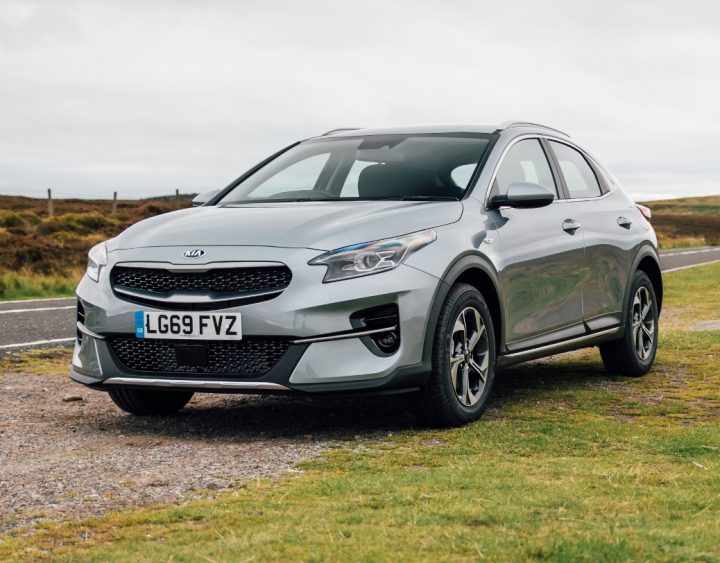 So what is the new Kia XCeed, asks David Miles.

They account for around 10% of Kia’s total annual new car sales and the extensive range of models reached another record in 2019 with 97,323 new car sales, an increase of 1.63% in a new car market down by an overall 2.37%. That’s individually more than Citroen, Peugeot, Renault, SEAT, Skoda, Hyundai, Honda, MINI, Nissan and Volvo, to name just a few of the popular mid-volume selling brands.

It’s most noticeable styling change is the steeply-angled fastback tailgate and the spoiler from the roof’s trailing edge which sits 60mm higher than the hatch version, with black plastic wheelarch and side sill protection strips.

At the front is a more prominent version of the familiar Kia family face with the XCeed having a bolder grille, larger lower air intake, new shape headlights with the Ceeds signature ‘ice-cube’ LED lights. These are topped by slim indicators lights that flow back over the wheelarches and it’s the same at the rear with the taillights and slim indicator LED spearing towards the rear shoulders of the vehicle.

There are sculptured styling lines running across the tailgate giving a wider and more pronounced appearance and the sculptured panels continue along the sides as well. Front and rear skid plates complete the Crossover/SUV look which is mostly cosmetic. 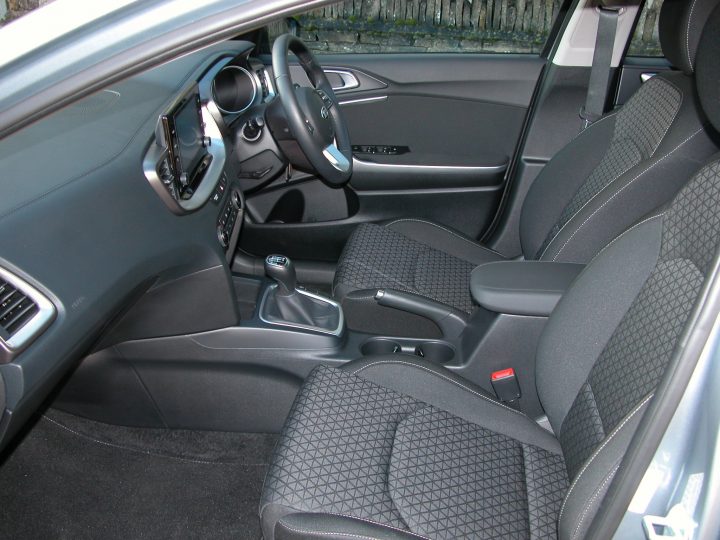 Inside it’s very much the same as other Ceed family members with a sculptured fascia and centre console all aimed at making it a driver focussed cabin. There is ample use of seemingly high quality soft touch trim materials, all well put together and the layout is simple and easy to live with. There is an 8.0-inch or 10.25-inch ‘floating’ touchscreen, depending on the spec level, mounted high up on the dashboard. 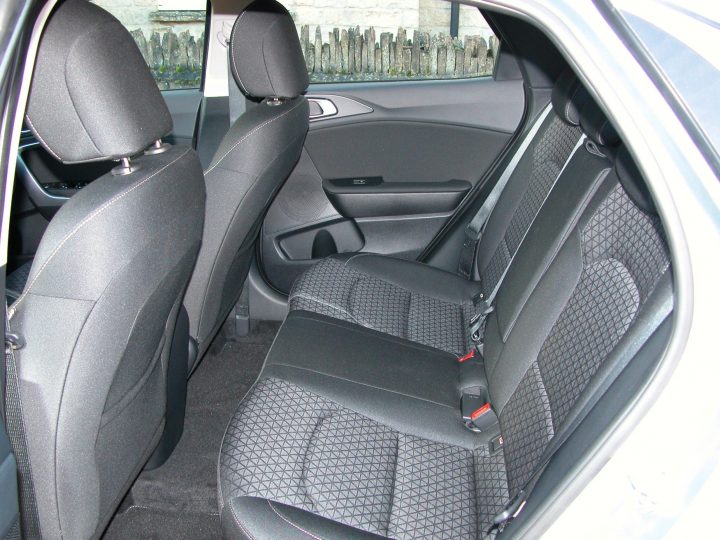 In the rear the longish wheelbase gives ample rear seat legroom for teenagers and potentially adults and the rear seat backs fold to extend the boot from 426 to 1,378-litres.  There is nothing really different or remarkable about the interior design, its typical Kia, well thought out, practical, of good quality and with its 7-year/100,000-mile warranty thoroughly serviceable.

My biggest gripe was the lack of an integrated sat-nav for my Grade ‘2’ spec test model, such a waste of a smart and easy touchscreen. You have to order a Grade ‘3’ or First Edition spec level to get an integrated sat-nav system which uses the 10.25-inch display. Below those levels you have to connect the mapping system via your smartphone, completely non user-friendly but becoming a more common occurrence on some non-premium brands these days.

Standard equipment does include High Beam Assist, Driver Attention Warning, Lane Keep Assist, Forward Collision Warning and Forward Collision Avoidance for town/city driving. Android Auto and Apple CarPlay smartphone compatibility are standard as is a reversing camera with dynamic guidelines which was most useful given the restricted rear view vision due to the steeply sloping tailgate window.  Alloy wheels, electric windows and air-con are all standard equipment. 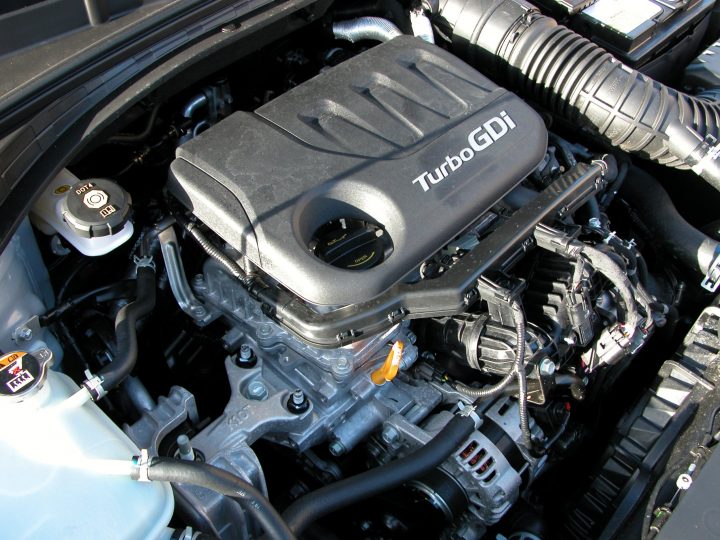 Under the bonnet of my XCeed test car with its Grade ‘2’ spec level was the 1.0-litre, 3-cylinder, T-GDi petrol engine. This turbocharged EU6 compliant unit uses direct injection petrol technology and produces 118bhp at 6,000rpm and 172Nm of torque from 1,500rpm.   It’s a gruff sounding unit, eager to rev but you need to keep the revs in its powerband to keep it moving.

Let the engine revs drop below 1,500rpm and progress is very limited and it takes a while before the turbocharger spins up with enough rpm to get the engine back into action. So get used to plenty of gearchanging to keep this unit in its optimum performance range. 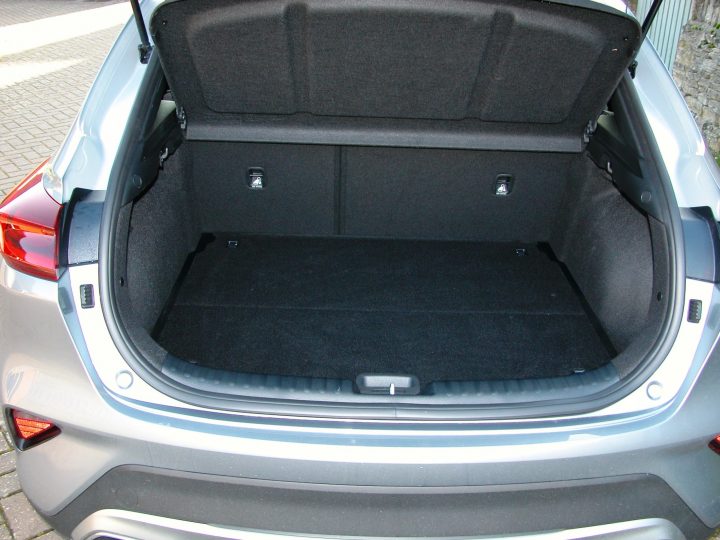 The 6-speed manual gearbox is a delight, light and precise changes were easy but the 4thto 6thgears are overdrive ratios to maximise fuel efficiency and increased the number of gearchanges during open road driving, especially overtaking slow traffic. A one gear drop wasn’t enough at times; a drop of two ratios at least to build up overtaking speed was needed, especially if loaded.

Top speed and acceleration is good enough but not as good or as refined as Ford’s or VW’s 1.0-litre triple-pot turbo petrol units. The WLTP Combined Cycle fuel economy figure is 45.6mpg for the Grade ‘2’ spec and my overall test drive figure for a period of longer and shorter trips was 44.3mpg.

That’s the nuts and bolts of my time with the XCeed, nothing really to fault it, some good bits like the warranty, the Crossover/SUV styling is nothing to get excited about, it’s a hatchback with a sloping rear tailgate and bodywork protection strips around the wheelarches and sills. 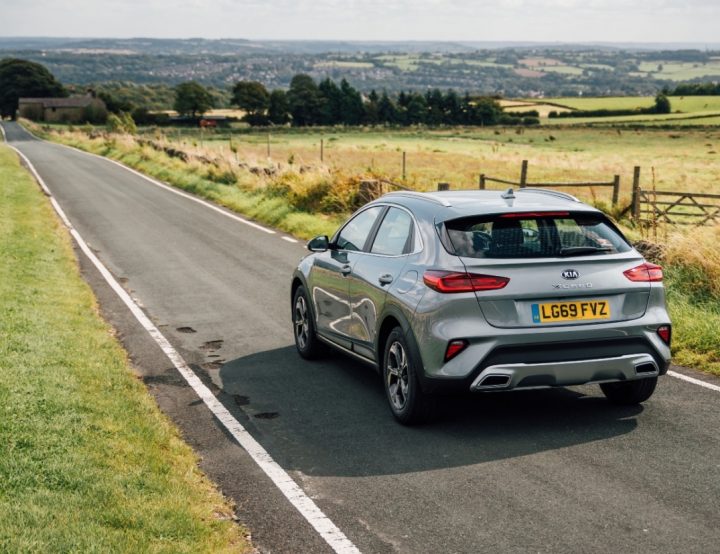 The ride is compliant although potholes are too obvious inside the cabin and on poorer road surfaces the rear tended to fidget with the wheels drawn to depressed lines in the tarmac. So the XCeed is good in parts, average in others and at around £1.945 more expensive than the equivalent five-door hatchback Grade ‘2’ spec I’d stick with the more practical load area hatch model.

For: Popular for some potential owners who desire the Crossover/SUV styling based on a family hatchback, reasonable running costs, excellent warranty, you could save around £2k and buy the similar Ceed hatchback  with the same spec and engine

Against: Styling is rather contrived, limited rear view visibility through the tailgate window, only 2WD versions for this pseudo Crossover model, fidgety ride control, no integrated sat-nav apart from high spec models.