You are here: Home / Featured / Sunday drive: Audi A4 AllRoad

Audi’s ‘model explosion’ continues with the arrival of the A4 Allroad quattro, a more rugged model than the A4 Avant quattro estate on which it is based.

Audi, who introduced quattro all-wheel-drive 37 years ago, now sells a third of their new cars with quattro traction.

This is the second generation Allroad and a member of the relatively new Audi A4 family of premium brand, mid-sized four door saloons and five door Avant estates.

The Allroad uses the A4 Avant estate’s body and Audi’s quattro all-wheel-drive system.

Competitors include the Volvo V60 Cross Country and Subaru’s Outback estates but there are more and more 4×4 versions of conventional saloons and estates being brought to market. Customers driving this demand are those that don’t want an SUV or Crossover but still want 4×4 traction.

They want that added grip for occasional off-road work use or for more secure on-road driving over our deteriorating UK road surfaces, or to combat our worsening Winter weather.

The new range has two levels of specification – Allroad and Allroad Sport. Both levels are available with a choice of four engines.

Ultra is the brand’s name for their most fuel and CO2 efficient versions. With the quattro ultra system, during standard operation, all-wheel-drive is deactivated but remains instantly available.

In effect the centrally positioned limited slip differential, which supplied driving torque permanently to all four wheels, has been replaced with a multi-plate clutch and integrated decoupler fitted to the rear axle so the rear wheels are only connected to the system when needed.

Currently this new ‘ultra quattro’ system is only available with the 2.0-litre petrol engine with the new Allroad but Audi says more models across their entire ranges will use this system in future.

Also in line with fuel saving and lower CO2 emissions the new A4 Allroad is up to 90kg lighter than the first generation range it replaces thanks to a new platform. The CO2 emissions are claimed to have improved by up to 21% as well.

As the main buyers of the new Allroad will be business users the important news is that Benefit-in-Kind company car tax is 25-26% for the 2.0-litre petrol and diesel engines and 27% for the 3.0-litre V6 turbodiesel models on 17-inch wheels.

As an example probably the best selling Allroad will be the new 2.0-litre TDI 190hp quattro automatic with standard 17-inch wheels. This has an official Combined Cycle figure of 57.6mpg and 128g/km of CO2 so BIK is 25% and VED road tax zero cost for the First Year rate and then £110 thereafter. This model has the range starter price of £36,010.

All versions have 34mm of extra ground clearance over standard A4 Avant estates. The £900 optional adaptive suspension with damper control I recommend as its various modes for degrees of suspension settings can be used to iron-out the firmness of the more rugged suspension needed for off-road robustness.

Likewise all versions have a boot space of 505-litres and with the rear seats folded this increases to 1,510-litres. Of course there are loads of extra cost options such as the £900 head-up display to the £2,000 Technology Pack. 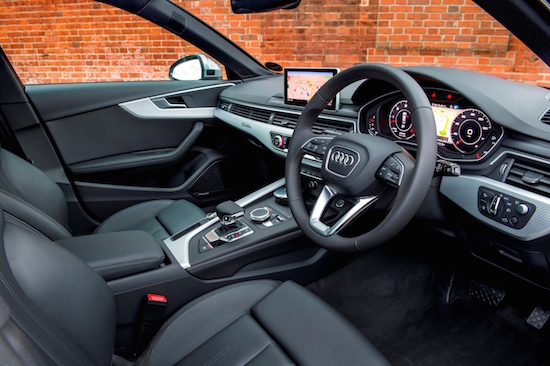 The A4 Allroad can be visually distinguished from its Avant stablemate by its large radiator grille, underbody protection plates, muscular bumpers, wide wheelarches and extended side sills. It is 29mm longer than its predecessor at 4,750mm and the wheelbase has been increased by 13mm so it is a little roomier than before.

Inside the Allroad carries over the superb cabin of the latest A4s so its looks great and is first class in quality making it a pleasing place to be for long hours of travel whether you are the driver or passenger seated in the front or the rear.

On the road due to its taller suspension, the body control is not as tight as conventional A4 models. It is a little looser during cornering with some body roll but not to any great uncomfortable extent. It doesn’t ‘waft’ around corners, it just feels less precise.

As far as ride comfort goes the optional adjustable suspension I suggest is a must for those users travelling long distances. In its standard form, or setting, the ride is firm and impacts from potholes resonate through the car. Set in its Comfort mode the ride on-road is first rate and will be tireless on long journeys.

With the 3.0-litre TDI most powerful engine producing 272hp and 600Nm of torque with drive to all four wheels through a new 8-speed tiptronic auto gearbox, performance at high or low speeds on-road was effortless and during a short drive using farm land the ‘grunt’ was reassuring going up hills and in and out of deep-rutted tracks.

It is the strong silent type aiming to please and complies with whatever demand is placed upon it. Officially with the standard 17-inch wheels the Combined Cycle fuel consumption is 53.3mpg with 139g/km of CO2 emissions.

Our test car had the optional 18-inch wheels costing an extra £850 which reduces the fuel economy to 52.3mpg and raises the emissions to 143g/km.

That increase in wheel size pushes VED road tax up from £130 to £145 a year and it increases company car BIK tax from 27% to 28%. It makes no financial sense to me to pay more for 18-inch wheels and then to pay more in running costs to have them.

For the record our test drive fuel consumption using winding Cotswold roads busy with holiday traffic was 31.8mpg. It will do much better on a longer run or motorway journey. 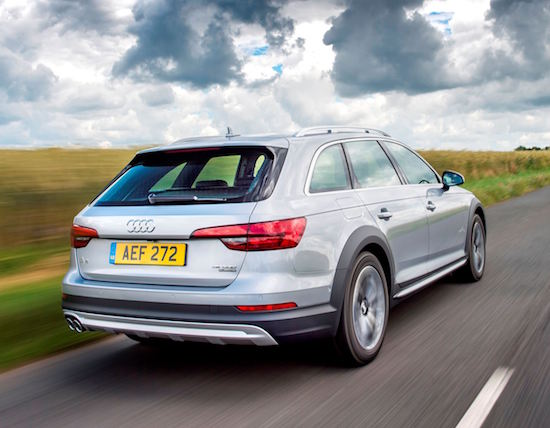 For a few owners where off-road travel is frequent, Vets, Surveyors, Architects, equestrian trainers and the like, the A4 Allroad quattro will make practical sense. But for most users wanting a plush estate car the A4 Avant quattro is cheaper to buy and run and still gives all-wheel-drive traction but with less ground clearance. It’s a ‘horses for courses’ decision.

Against: Not the most logical A4 model for most people, higher spec options mean higher running costs in addition to significantly increasing the already high the on-road price.