New car registrations collapsed to a 22 year low last month due to the semi-conductor shortage delaying scores of models’ introduction.

Society of Motor Manufacturers and Traders reported sales plummeted 34.4% year on year in September – traditionally one of the busiest months for the industry after the March new-plate change. 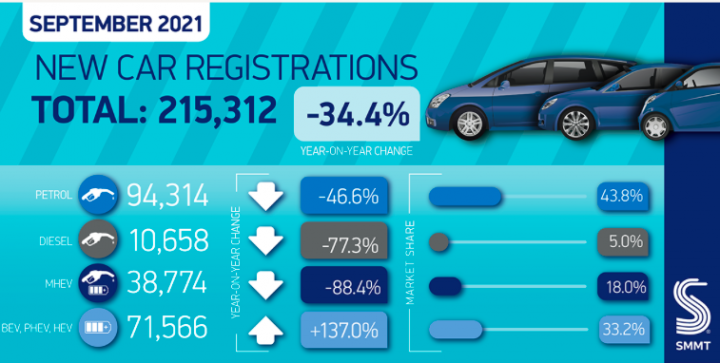 Just 214,312 new cars were registered with the latest plate identifier last month, the lowest September total since the two-plate registration system was introduced in 1999. It is also 44.7% down on the 10-year average for September.

The popularity of alternatively fuelled cars continues, with 32,721 battery-electric cars registered in September, just 5850 fewer than were registered in the whole of 2019 and it was the best month on record for BEV uptake, bringing the segment’s market share up to 15.2%.

Demand from private car buyers dropped 25.3%, as just 120,560 cars were purchased by individuals, but it was a 43.1% decline in fleet sales that had the biggest impact on September’s figures and probably reflects the slow turnaround of businesses since the CV-19 restrictions were eased.

Wales sales were slightly better than the UK average with a dip of 28.83% and 8,637 new cars registered. Ford had the best seller but it was Kia which dominated the top ten as buyers sought the best deals. The only encouraging feature for the trade is the hoped for return of buyers when new car supplies improve in the months ahead.