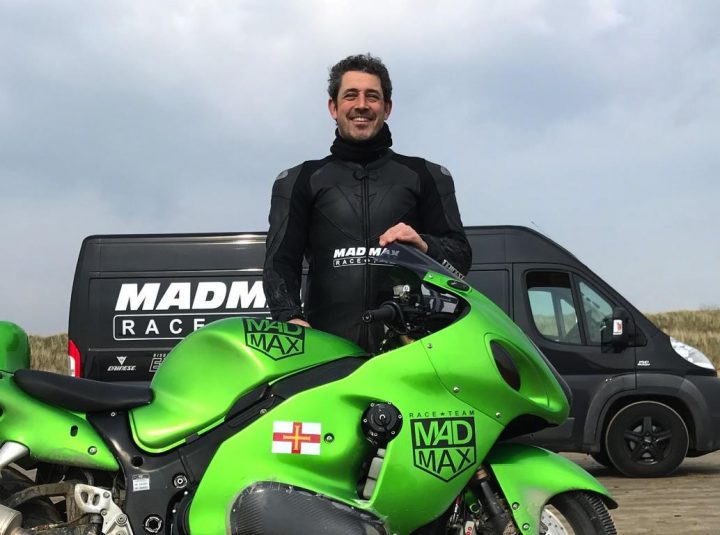 Riding a specially made 400bhp supercharged Suzuki Hayabusa (right) that was built and prepared by Eisenberg’s MADMAX Racing Team, he set a two-way average of 182.40mph on Saturday 6 April.

In 1927, Sir Malcolm Campbell reached 174.8mph at Pendine, Carms in his iconic aero-engined Blue Bird and that record was unbroken until May 2015. 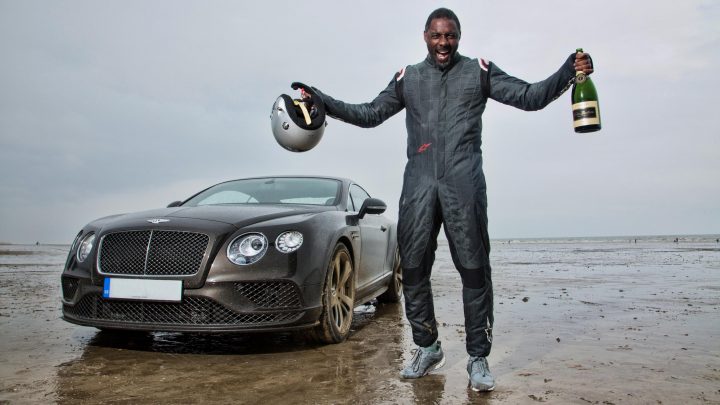 Then actor Idris Elba (right) achieved 180.361mph along the historic beach in a 650hp Bentley Continental Super Sport twin-turbo W12 – yet Eisenberg needed only a single run in both directions on the ‘Green Monster’ to surpass both, with a rear tyre that was found to be falling apart after the first run!

“The bike had been spinning the rear wheel for two miles at 240mph,” explained Eisenberg. “We were using a GP racing tyre, too – the best you can get, but I assume it’s not used to that much power or wheelspin. That’s why these records are so hard to achieve. You’re pushing human and engineering boundaries.”

The MADMAX team fitted a new tyre during the permitted one-hour turn-around time, enabling Eisenberg to complete his return run and establish the new record. For the third run, a harder compound of tyre was used, but the extreme demands of running at maximum rpm for nearly three miles – and constant wheelspin at such high revs – took its toll on the motorcycle’s highly stressed engine.

“I was doing 195mph approaching the end of the mile,” said Eisenberg of the moment the engine blew, “and my helmet visor and leathers were sprayed with black engine oil, obscuring my vision. I lost sight of the finish flags, but I couldn’t just slam on the brakes due to the sand. Fortunately, I managed to keep it straight and bring it to a stop.

“Then I noticed engine oil spraying onto the hot exhaust, but unless I jumped off and dropped the bike, I couldn’t get off because I couldn’t put the kick-stand down on the sand! Luckily, the oil never caught fire on the hot exhaust, as the bike would have burst into flames…”

The critical engine damage prevented Eisenberg and the MADMAX team from achieving their ultimate goal of 200mph for the Flying Mile, but they’d already done enough to break the all-out Flying Mile record for ’bike and car.

They will be back at the legendary venue during the Speed Week on 18 & 19 May with their 1200bhp Porsche Sand Racer, painstakingly developed from a 2015 911 Turbo, driven by Eisenberg in an attempt to break the outright Flying Mile record.

His goal will also be to establish a new benchmark for the highest speed ever achieved at Pendine by a wheel-powered vehicle – a record that Eisenberg currently holds at 201.5mph on the MADMAX ‘Green Monster’, making the Suzuki the fastest-ever motorbike on sand.