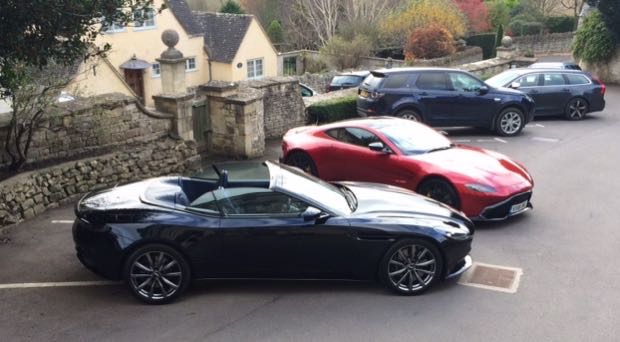 The Aston Martin story has all the excitement, luxury, twists and turns of a good James Bond book, but the reality in your hands is an exclusive range of high performance sports cars which now include the DB11 Volante and Vantage coupe, writes Robin Roberts.

These are the latest additions to the range which comprise limited edition and Continuation models for the uber-rich AM enthusiasts and car lovers.

From foundation in 1913, Aston Martin has today built up production at Newport Pagnell and Gaydon, with St Athan and Silverstone assembly sites coming on stream in the near future and producing the next few chapters in its illustrious history with an SUV and electric models included.

It’s all happening against a background of a dramatic turnaround in business fortunes under president and ceo Andy Palmer after years of running with losses and the latest results show Aston Martin’s quarterly profit before tax rose to £3.1 million pounds, a tenfold increase as sales volumes doubled in the three-month period.

In October it became the first British automaker in decades to float on the London Stock Exchange and expects full-year sales to be up to 6,400 vehicles.

Shrewd planning by Mr Palmer and his management team mean it is also preparing for eventualities as Britain leaves the EU next spring, building up components’ stocks and considering air freight and more ports to bring in the parts it needs and, even more importantly, to export the cars it makes in the UK. 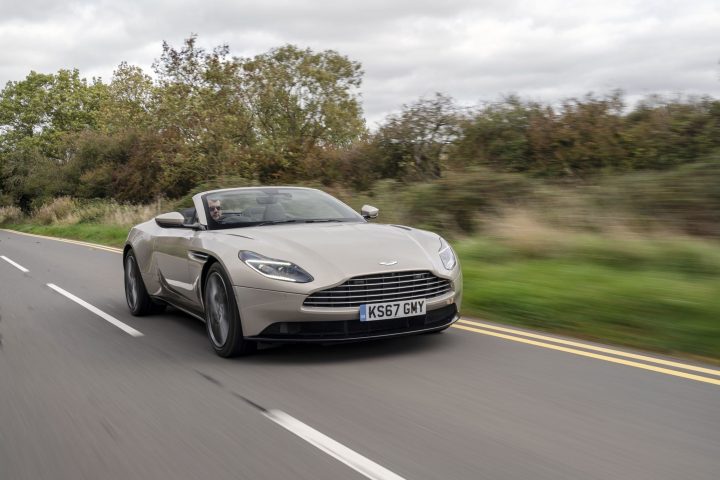 The DB11 Coupe was the first model created under the  progressive “Second Century” business plan of President and ceo Andy Palmer, and now the DB11 Volante soft-top convertible has arrived, fitted with the company’s 510ps 4.0V8 engine and eight-speed sequential automatic transmission. All delivered for about £160,000.

It retains the two-plus-two seating and an eight-layer electrically powered hood clamps down on the windscreen rail and into the boot space. That means it further restricts the already small luggage space but you can slip in a couple of overnight bags in the 270 litres maximum space if you keep the car closed. 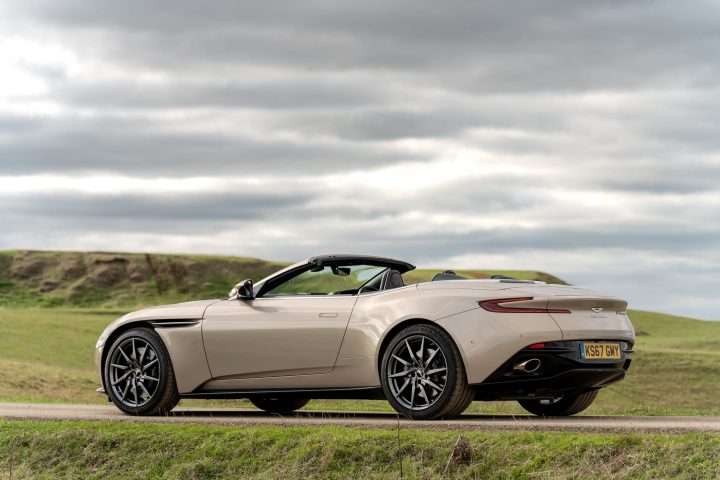 Engineers have done a brilliant job in carefully strengthening the Volante chassis and there’s no loss of rigidity, twisting or vibrations, and if the worst should happen and the car turned over, two safety hoops deploy in milliseconds behind the twin back seats to protect all occupants.

The hood stows or erects in a few seconds and whether down or up there is minimal wind noise generated to disturb the refinement of the car or comfort of occupants.

That refinement extends to the changeable settings to sharpen or soften the powertrain and suspension and it all happens instantly at the touch of two buttons. 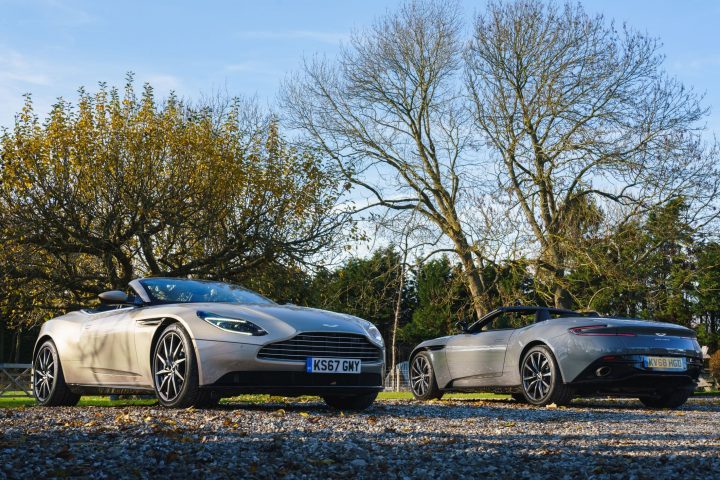 The powerful 4.0V8 engine packs a punch if you want to use it, hitting 60mph in about 4 seconds and onto a maximum approaching 190mph, but you have to ask why you want to go that fast when you can enjoy the DB11 Volante at much slower speed up to the UK legal maximum.

Over a two-hour drive on mostly country roads last week we enjoyed the handling, ride, responses and comfort, and saw a return of 24.1mpg. Everything inside was eye-catching and very stylish, beautifully put together and logically laid out.

The new DB11 Volante is a very worthy addition to the Aston Martin stable which will pull in admirers to the brand who want a roomy, refined and capable cabriolet brimming with Britishness and performance potential. 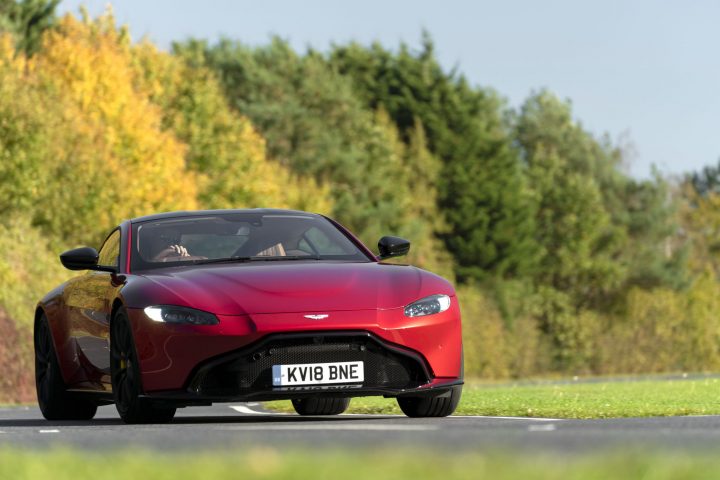 If you think of the DB11 Volante as a faithful Labrador, the new Vantage is every inch a Bulldog which strains at the leash, but with one exception, the car is better looking in every way.

Even parked, the new Vantage looks like its moving as your eyes are drawn to the sculptured front spoiler and then along the sweeping wings to the wind-cheating cabin and over the elegant upswept-tail above another intricate piece of moulding housing the exhaust pipes.

It has one of the largest bonnets of any car in production and that covers a 510PS 4.0V8 twin-turbo engine which gives a 0-60mph time of 3.5secs and maximum 195mph.

It is the first Aston Martin to get an electronic rear differential and also uses airflow like an F1 car to cool essentials and provide additional downforce grip. 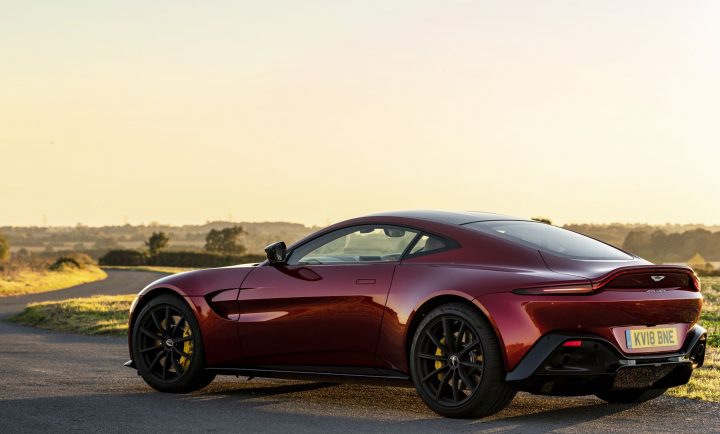 An extensive suite of driver aids mean you get the most out of the engine, eight-speed ZF automatic box and that new intelligent rear differential. We achieved 19.75mpg. The Vantage’s high-technology chassis and powertrain takes nothing away from the driving pleasure but enhances it in every way.

It is immensely quick and punchy from rest, pours out power in a seemingly never-ending flow, with instant changes up or down the box for safe and swift overtaking, and it steers and stops with utter assurance and confidence. You never feel out of your depth or in danger. 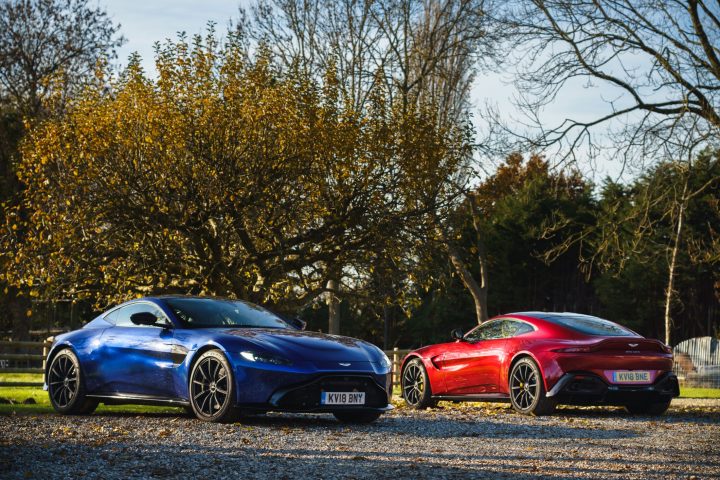 We enjoyed the £121,000 Vantage with its sharper standard responses and it really carried on where the DB11 Volante ended its selectable settings. The coupe included a Track Day setting for the would-be racing driver owners to fully enjoy its performance in safety and out of the reach of speed cameras.

The ride is noticeably firmer from the outset and generates more road noise but it stays planted on the tarmac. Our test car’s quartic-steering wheel with rounded corners felt entirely natural after a few miles, if a little strange at first.

The driver and passenger sit low in the cabin but have a lot of room; there is generous oddments space behind their seats and on a deep rear parcel shelf over the larger 350 litres boot.

The Aston Martin Vantage name goes back to 1951 and it has been the marque’s entry-level and best selling model over the years. With the new powertrain and handling refinements there is no reason to doubt it will not continue the success it has enjoyed. So, the Aston Martin story continues, apace.