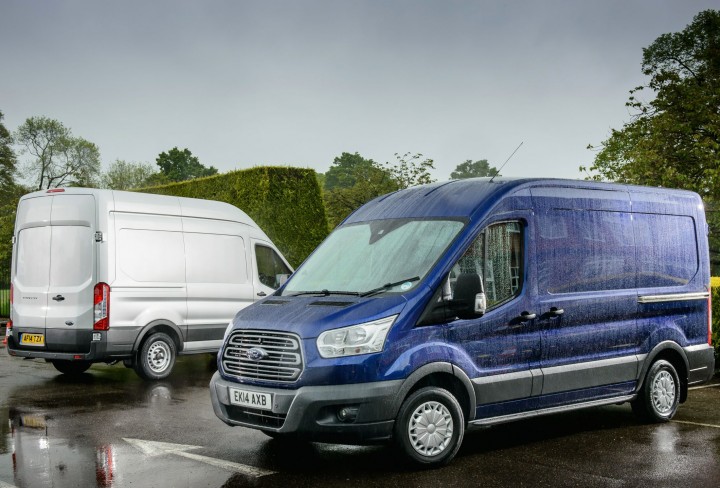 Britain’s best selling van has just got better than ever with the arrival of the Ford Transit two-tonne model.

Fitted with the latest engines and gearboxes, the new series builds on the strength of its predecessors and offers reduced maintenance and running costs with improved warranties and the everyday benefits of larger capacity, easier access and more user-friendly cabin.

Coming in above the Courier, Connect and Custom Transit models, the two-tonne model will also be sold in the US for the first time, where it will be built in Kansas, as well as Turkey and Russia. 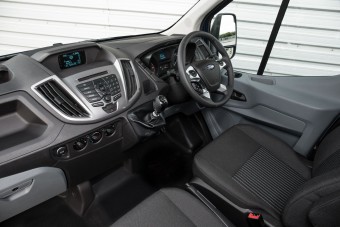 Using a modular platform like so many car makers do, the new Transit two-tonne will be available with front wheel drive, rear wheel drive and four-wheel-drive in three wheelbase measurements with pickups, vans and crew-cab versions available as well as mini-buses in various seating capacities and two roof-height choices.

It has a 11% higher capacity, better load location, a lower access step and a sliding side door which will permit loading pallets by fork lift trucks. There is also brighter interior space lighting, easy clean liners and better body protection.

Cabs are roomier with more car-like adjustable seating and steering column, increased stowage and flat surfaces as well as charging points for laptops and phones. There will be Base and Trend models in the new series from £20,795 and £22,295, plus taxes and duties respectively with BIK at £51.50pm.

The Transit two-tonne uses three power output versions of the same 2.2 Duratorqu diesel assembled in Dagenham with a choice of 100, 125 or 155PS power with the least powerful for the FWD versions and the RWD models use the two others, while the AWD is only produced with the mid-power engine.

Launch manager for the Transit series, Christine Lund, said, “Transit is a very important model for Ford in Europe and the UK and we have made seven-million since the original was launched nearly 50 years ago and with the latest we are taking it into the United States as well.

“With the arrival of the Transit two-tonne we can offer no less than 450 versions, so there is something for everyone.”

She added that Ford had not only increased the physical dimensions over the previous series but had fitted or offered more technology for users and this has reduced running costs.

Transit product manager for Britain, Dave Petts, added that the new range was the most advanced CV series on sale and would consolidate the 23% market share of Transit in the UK and conquest sales were rising over other brands as value-for-money was vitally important.

He added that the Transit’s durability was legendary and of the 7 Million made in 49 years, 2.3 Million were sold in the UK and there are still 700,000 registered and it is in fact the third best selling model of Ford in Britain after the Fiesta and Focus cars and was the sixth best selling model in the UK across all brands.

Existing Ford Transit drivers and owners will be impressed with the new generation of two-tonne models.

Not only is the range truly enormous but it also delivers some real-world savings over the previous series while packing in more practicality and user-friendly features.

Our first drive in a Transit FWD 310 Base with 125PS 2.2TDCi and 6speed manual transmission showed up a much more civilized three-seat cabin and produced a smoother ride.

Equipped with 230v 3-pin plug, manual A/C, LED load box lights and painted in silver it worked out at just under £24,300, ex-tax but the standard specification includes anti-locking brakes and hill start assist, dynamic handling assistance and headlights delay along with USB/ipod links and electric windows.

Oddly, it did not have powered mirrors and the really useful reversing camera is an expensive option. For such a roomy cabin with lots of oddments space, shelves and cubbies it was also sometimes difficult to quickly read the small display on the central console. 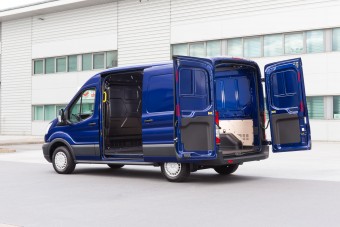 The smooth steering, sweet shifting six-speed gearbox, powerful brakes and generally absorbent suspension reduced effort and stress, and on twisting roads the handling is much sharper but you can still hear the wheels and tyres banging over potholes and raised tarmac because other mechanical noise is low.

Using the side and rear doors is easier than ever and the new strap down system is really useful at keeping the floorspace uncluttered.

Excellent visibility comes from the big windscreen, low-waistline doors and big mirrors including a blind-spot section.

The Ford Transit two-tonne is more evolutionary than revolutionary but it will still be the standard or benchmark for years to come and rivals to try and better, which seems unlikely.