Two rounds to go – and just two drivers remain in the FIA World Rally Championship title fight as the destiny of the 2022 crown reaches a potentially decisive point in Spain this weekend.

Sébastien Ogier can seal his eighth drivers’ title in nine seasons at RallyRACC – Rally de España (14 – 17 October) and the only man who can deny him and take the battle into a final round decider in Italy next month is Toyota Gazoo Racing team-mate, Elfyn Evans.

The contrast could not be greater. Ogier has dominated the WRC over the last decade, delivering 53 rally wins in his career and is now in his final season before stepping back from full-time competition. 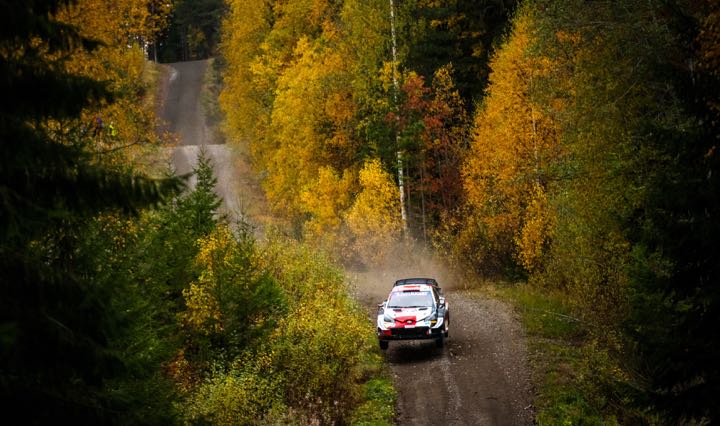 Evans secured his fifth WRC event win in Finland a fortnight ago (above) and is desperate for a maiden crown after losing out to Ogier last season. He started the final round at Italy’s legendary Monza race circuit with a points lead but ended in despair after crashing out.

This time around Ogier carries a 24-point advantage in his Yaris World Rally Car onto the smooth asphalt in the hills behind the Costa Daurada, south of Barcelona. The crown will return to France if he outscores Evans by seven points.

It’s the third straight season that Toyota will win the drivers’ crown and Ogier, a Spain winner on three occasions, will come out fighting. “Spain will be the first realistic chance to claim the title and I know what I need to do to make it happen. When I have the chance to win, I try to fight for it, and this will be the most simple way to achieve our goal,” he said.

Evans is fired up by his Finland success, “The win on Rally Finland was a great result for us. The drivers’ title is still a long shot, but once more we’ll be giving our best in Spain and trying to get the best possible result there.”

Ogier, Evans and Kalle Rovanperä can also regain the manufacturers’ title for Toyota. It holds a 61-point lead over Hyundai Motorsport and if that advantage remains above 52 at Sunday’s finish, the Japanese manufacturer can launch its celebrations.

Thierry Neuville, the winner in Spain when the rally was last held in 2019, Ott Tänak and home hero Dani Sordo are the men charged by Hyundai with the task of derailing Toyota. All drive i20 World Rally Cars.

The French squad has also called up Spain’s Nil Solans to replace Pierre-Louis Loubet, whose season is over after breaking his hip in a collision with a car. Toyota also fields a fourth Yaris for Japan’s Takamoto Katsuta.

For the first time since 2009, the rally is pure asphalt. The roads are fast and flowing, but high-grip abrasive surfaces and plenty of hard braking will make it tough for Pirelli’s tyres.