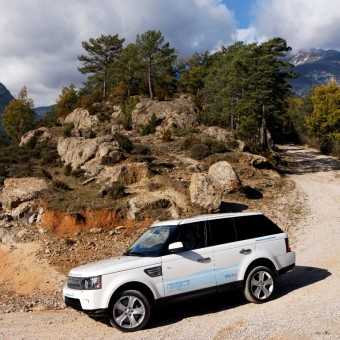 After it was launched in 1970, the Range Rover set a benchmark for luxury off-road travel and it’s about to do it all again with the new generation of diesel-electric hybrid models due in 2013.

Some may think of it as a mid-life crisis but that suggests uncertainty and panic and the sure-footed engineering and marketing of the Range Rover is anything but that.

It is, however, Land Rover’s response to an energy crisis which will see the arrival of the diesel-electric hybrid Range Rover in a year’s time, and a few years later the Plug-in Diesel Hybrid.If you are wondering what it will be like to drive the first fully capable 4WD Plug-in Diesel Hybrid you don’t have to wait four or five years.

I have driven a development model and can tell you it is very, very good.

Unveiled 12 months ago at the Geneva motor show in March 2011, the Range_e was created after about six months of engineering work starting with a shell off the Range Rover Sport line and adaptations to fit the electric motor, power battery, control system and charging feed with as little compromise as possible to the refinement and go-anywhere capability of the premium off-roader.

So the Range_e has the same full 4WD capability as the standard model, high and low range transmission, centre, front and rear differentials. The engine management system has been extended to automatically select the most efficient drive method and it incorporates regenerative braking to boost the charge into the battery which fills the spare-wheel-well. 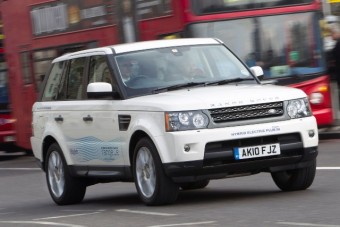 Testing on-road in London Outwardly only a plug-in charge point next to the fuel filler distinguishes the Range_e, and inside it is almost standard Sport, except for a bespoke instrument panel on the prototype to show charging mode and battery state. Under the bonnet is a familiar 245ps 3.0 TDV6 diesel engine, which is made in Britain at Ford Dagenham, and an eight-speed ZF automatic box, and there is a 69KW electric motor connected to the 14.2KW/h lithium-ion battery which can be charged in four hours from a conventional 240V socket.

Land Rover say the four hour charge costs about a £1 and gives the big Range_e 20miles use without tailpipe emissions, which would allow it free access to many cities charging or thinking of charging for emission-causing vehicles.

When you factor in the time the diesel would be running and with the electric motor boosting power alongside the compression ignition engine to 330ps the overall emissions are certified at 89gkm of CO2, yet it can reach 120mph and overall return 85mpg while it could cover 690miles without seeing a fuel pump. Those are incredible statistics.

The Range_e is more incredible to drive. Land Rover has decided it has to be as close to standard, to what drivers are use to, if it’s to win over existing owners and it has a button starter and remote key, conventional electric parking brake and throttle.

Five prototype Range_e models have been built since December 2010 and are engaged in a test programme as part of the Coventry and Birmingham Low Emissions Demonstrators consortium.

This is gathering real-world usage data to refine the systems and technology ahead of making the first production vehicles, starting with the diesel hybrid in 2013 and the Plug-in Diesel Hybrid a short time later.

The prototype fleet is on the road, and off, almost every day and has been used by a variety of drivers, not just engineers, covering about 2,000 miles a month.

Technology learned along the way will be applied to other Land Rover models as well as some Jaguar cars from the sister company.
On the prototype it requires two depressions of the button to start and only the rising rotary gear selector indicates it is ready to run once you turn out of park setting. It moves off smoothly, near silently and pulls well as you join traffic.

Through the gears there is no hesitation whether going up or down the box, just very good pick up when you want to make progress. 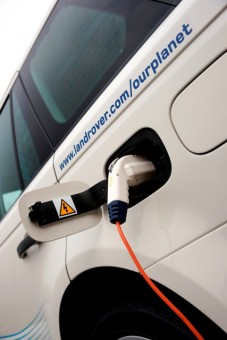 In overtaking situations the diesel cuts in seamlessly and gives additional punch but with a full charge in the system it quickly cuts out again as the electrics take precedence.

You can watch the system sorting itself out on the instrument display but otherwise you would not know save for when the diesel engine note cuts in or out.

Ride, handling, comfort and practicality are the same as the standard line model but whether or not there would be any further changes in a production version remains to be seen. I think it is unlikely.

Land Rover jealously guards its true water wading reputation and work is still going on to evaluate and test the Plug-in Diesel Hybrid for its abilities off-road, but there is nothing to suggest it will be compromised.

Land Rover seem to have found that electricity and water can mix and that’s going to be another benchmark. ©Robin Roberts Simple 240V plug in charges in four hours for £1