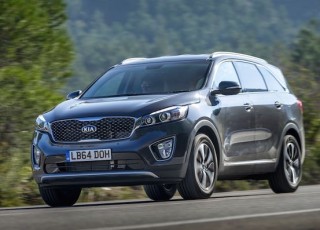 Kia has mounted its strongest challenge yet to Europe’s premium brand SUVs with the latest Sorento.

Boasting a completely new design with the latest cleaner engines, sophisticated equipment and a sharper quality edge, the third generation Sorento has also moved up the price brackets.

Six models in the seven-seat series comprise three trim levels with a choice of six-speed manual or six-speed automatic transmission, all with four-wheel-drive.

This is a big five-door, seven seat family car measuring over 4.7M but with more legroom than before and some easy to use or hide rear pair of seats which means the luggage capacity varies from 142 litres to 605 litres or a maximum 1,662 litres depending on seats’ configuration. It has been popular with taxi and airport services for obvious reasons.

One of its strongest selling points is also the seven-year or 100,000 miles warranty, which really shows belief in its engineering even if owners never keep them that long.

For the third generation since Sorento launched in 2002, Kia has stuffed in more equipment in each of the three trim levels, 1, 2 or 3, and we tested the anticipated middle range best seller, although early indications are that the top KX-3 will actually outsell it. Manual is the preferred transmission but the top half of the box are all over-drive ratios and this means it has to be worked harder in lower gears to make progress, particularly when heavily laden with family or friends.

As a result we managed a best economy of over 38mpg and frequently saw it return 35mpg, some way off the EU-tested figure but still good for a big car like the Sorento. 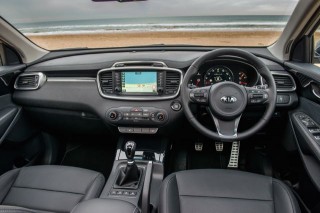 What the bald figures do not tell you is how easy it is to drive for a big car. All the controls are well laid out, work well with a good turning circle, effortless clutch and gearchange and reassuringly strong brakes which needed modest effort on them, but I did find the handbrake needed to be fully engaged before it stopped the Sportage rolling back on a test hill we use.

The engine was lusty in the lower gears, very free-revving for a diesel and only slightly noisy as speed increased, but much quieter and composed on main roads.

It is a smooth riding SUV without the hardness of its German counterparts and it’s a delight on longer journeys as a result. There is some body roll but it holds the road well and there are no real vices to concern a driver. 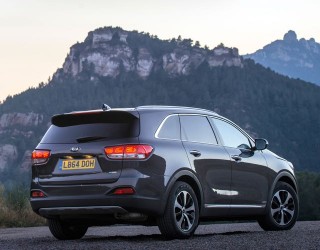 Visibility is enhanced by the reversing camera and the all-round sensors on the KX-2, the lights are very good and the wipers sweep a big area of glass.

Apart from the engine noise at high revs in lower gears and some occasional suspension bump-thump, the Sorento is generally quiet.

Sorento’s strong European styling, high equipment and ease of driving will win it many admirers and owners, particularly among the existing Kia driving families.

It’s not as cheap as Kia once were but it is a significant advance over what has gone before and it can still be excellent value when compared to rivals which have less equipment and shorter warranties.