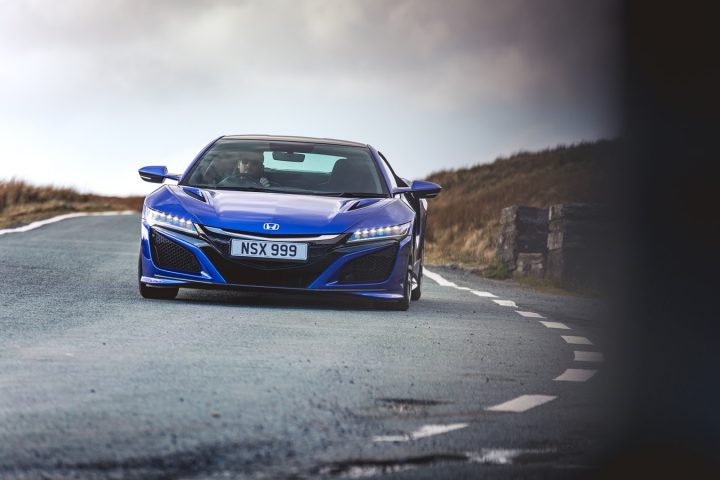 The insanely-hot Honda NSX has had a make-over for the New Year, and it’s handling is now better than ever.

Hybrids are hot news at the moment, but none come hotter than the Honda NSX.

Those enterprising engineers at Honda saw a role for hybrid power to boost the power and economy of their range topping two-seater coupe when they prepared for its relaunch three years ago.

The body is part aluminium and plastic over a mixed-material spaceframe with aluminium subframes either end carrying the powertrain, suspension and steering. 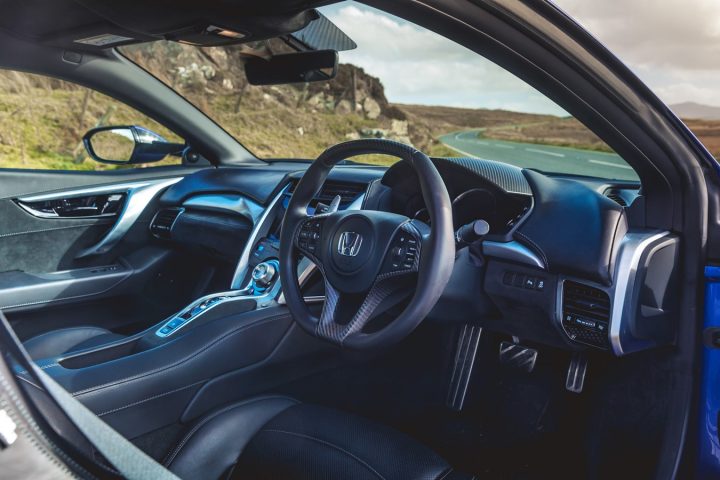 The 2019 NSX is fitted with larger front and rear stabiliser bars, raising stiffness by 26 percent at the front and 19 percent at the rear, while the rear hubs and control-arm toe link bushings are also harder to sharpen handling.

The dampers now provide a ride and response that is even more comfortable in the softest setting, while maintaining the stiffer set-up for higher speeds and on-track driving.

To maximise the improvements potential, Honda has fitted the latest Continental SportContact 6 tyres developed for their coupe’s chassis and suspension. But that’s not all.

Powertrain changes have improved fuel injection and turbocharger performance while keeping exhaust emissions within new limits. The 2019 NSX also gets cosmetic changes outside and in, and new colours, Thermal Orange Pearlescent paint or Indigo Blue as well as new full red leather upholstery. 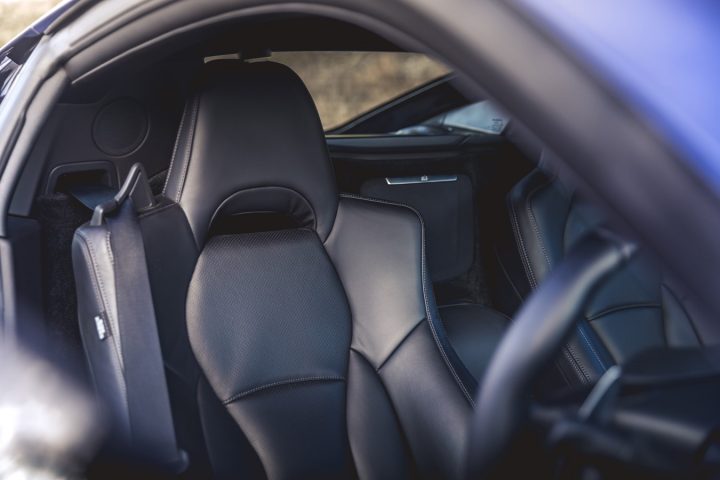 The interior changes have not increased the roominess, and the NSX remains a tight fit for anyone over about 5ft 10in or 1.8m. The seats are comfortable if you have a medium sized frame and their modest adjustment room is offset but the way the bolsters locate you.

If you can fit into the seats, the major controls immediately fall to hand and foot and the secondary stalks and buttons are close as well. Instruments are infront of the driver, big and very clear.

Infotainment console is central, clear and the cabin temperature control is straightforward and works well irrespective of chosen output. Oddments room is very limited and it’s not much better in the luggage space. 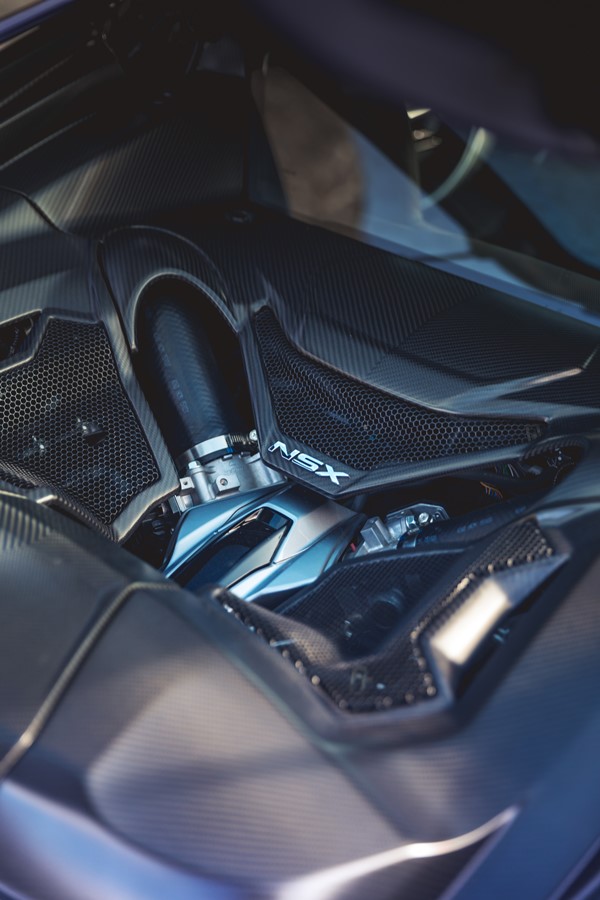 Noise levels are mostly confined to that wonderful engine’s output, particularly through the lower of its nine-gears if you want to explore its performance, but it also generates some noticeable road rumbles, although there’s little wind noise.

Newly revised steering ratios have vastly improved response without making it twitchy or vague and the massive Brembo brakes haul down speed with the lightest pressure underfoot.

The 9sp automatic transmission is incredibly smooth and quick.

These added to the selectable suspension settings have transformed the Honda NSX for daily use.

Stick to the economy engine responses and softer spring rates and you will comfortably cover distances with low fuel requirements. 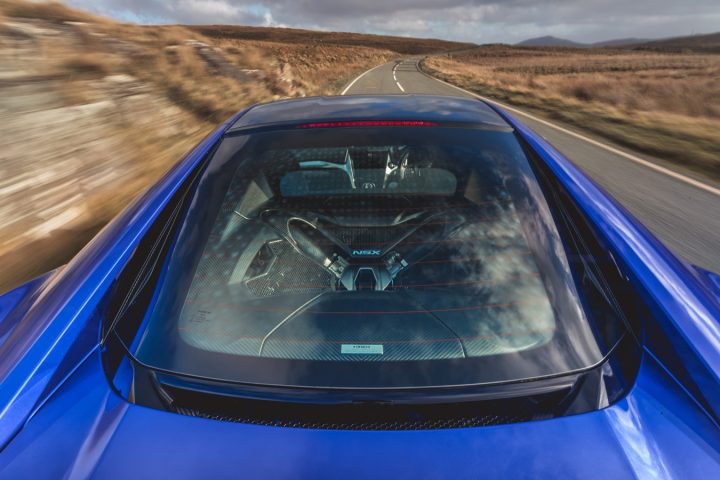 The all-wheel-drive grip keeps it planted on the road without being heavy handed thanks to the steering changes and you never seem to approach its limits at ordinary speed. You have a big petrol engine behind the driver and passenger’s heads and three electric motors in the powertrain to dramatically boost performance.

On open country roads you can move to sharper suspension and responses and you still have the ultimate track tuned set up if you have the opportunity. 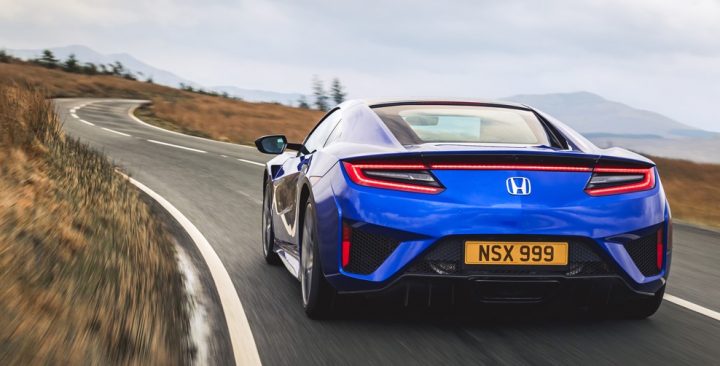 On track visibility is rarely a problem but the sleek low lines of the NSX mean you have to be very careful when parking or negotiating traffic on trunk roads. Lights and wipers are very good.

The 2019 Honda NSX is a modern supercar which utilises the latest powertrain technology to deliver a rare, refined and really enjoyable drive over any roads.