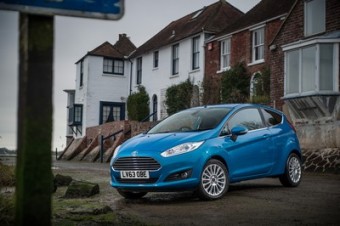 The Ford Fiesta is something to celebrate.

It is Ford’s global best selling small car with 735,300 sold last year.  In the UK the Fiesta has been the best-selling car overall for the last five years with almost 122,000 sold last year and already nearly 50,000 have been sold in the first third of this year as it retains the number one position in the UK’s new car sales chart after leading the market for 37 years.

In March the appeal of the best selling 1.0-litre Ecoboost 100PS models was increased with the introduction of a new six-speed PowerShift six-speed automatic transmission option for three and five door hatchbacks.

Ford expects the Powershift automatic option to be taken up by 5% of UK customers, mainly retail buyers and through the Motability scheme.

The 1.0-litre EcoBoost three cylinder direct injection turbocharged petrol engine accounts for nearly half of all Fiesta sales in the UK because it delivers the same power as larger engines but with reduced CO2 emissions and better fuel economy and that’s particularly important for business users.

The new six-speed dual-clutch is electronically controlled for optimum seamless gearchanges and it can be used in a fully automatic mode, sports mode or gears can be selected manually.

On the down-side it adds £1,250 to the price of Fiesta with the same engine with a five speed manual gearbox and the fuel economy is slightly less and the CO2 emissions higher.

However both the manual and auto versions have the same performance figures with a top speed of 112mph and a zero to 62mph acceleration time of 11.2 seconds.

I have just had a spell in a Fiesta 1.0-litre 100PS Ecoboost with the automatic gearbox and with Titanium X specification all wrapped up in the more popular five door body option.

This version carries a price of £17,995.   Add in a few useful options and of course the prices increases but are worthwhile like the Sony navigation system with DAB radio/CD with Ford SYNC communication costs £400 and front parking sensors £150.

It is a formidable array of specification and despite the price it is proving most popular with customers.

At this level and with the new automatic transmission the re-styled Fiesta is a small car but with all the functions and refinement of a much larger car.

Ride comfort for a ‘supermini’ is first class, the handling sharp and responsive and it is quite easy to see why it is our best-selling car.

Another appealing feature is the range of fuel and CO2 efficient turbocharged EcoBoost petrol engines on offer through the range.

They maybe small in size but produce more power and torque than the larger capacity engines they replace.  For instance the 100PS (99bhp) unit I tried with its three cylinder design has won numerous global awards including International Engine of the Year in 2012.

The Ford unit, which would sit on an A4 printing paper no matter which version or power output is chosen, is remarkably smooth with no customary ‘three-pot’ coarseness during acceleration or lumpiness at tickover. 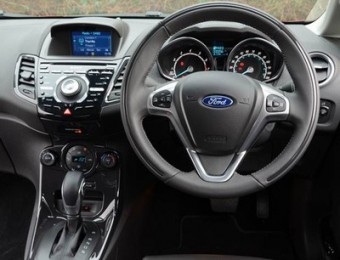 Marry that smoothness with the slick action new twin-clutch automatic transmission and it is a happy union.  Having six ratios suits this torquey 170Nm (125lb ft) engine even though maximum torque is developed at a relatively high 4,100rpm.  The six close ratios means no power delivery fall-off between gearchanges  and there is always the right ratio swiftly engaged when pressing the accelerator  to move from slow or medium speeds. The low first gear ratio can be a little harsh engaging from standstill but the upside is it gives spritely acceleration from the stationary position.

On motorways the tall sixth gear ratio provides relaxed cruising with a minimal increase in engine noise.  Unlike many other small petrol engines I’ve tried this unit does not feel stressed when worked hard to maintain motorway speeds or when driving up steep hills. The new six speed, twin clutch auto gearbox just drops a ‘cog or two’ to maintain momentum.

As for fuel economy?  During my week long test driving spell using mainly rural A/B roads, a short motorway trip and some stop/start driving the overall figure was 41.2mpg.

As for the latest Fiesta itself?  The most recent styling updates have given it a more premium look, it doesn’t look a small, cheap runabout.

Inside the quality looks and feels improved to some extent but the controls and buttons mounted on the upper central part of the fascia look a mess, they are difficult to use and to understand. 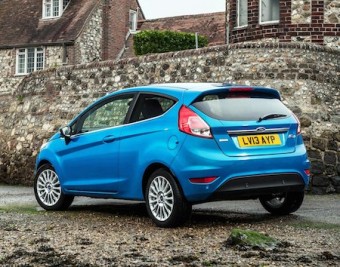 They have been like this since the car was launched and the design is used on other Ford models and they don’t get any better to use – in my opinion anyway.

Another long-term gripe is the small recessed information/sat/nav screen, too far away from the driver and difficult to see at times.

These are minor issues and should not detract from the overall praise the Fiesta receives from the Media and by customers who buy thousands of them.

The new auto gearbox will be the icing on the celebration cake for many buyers.