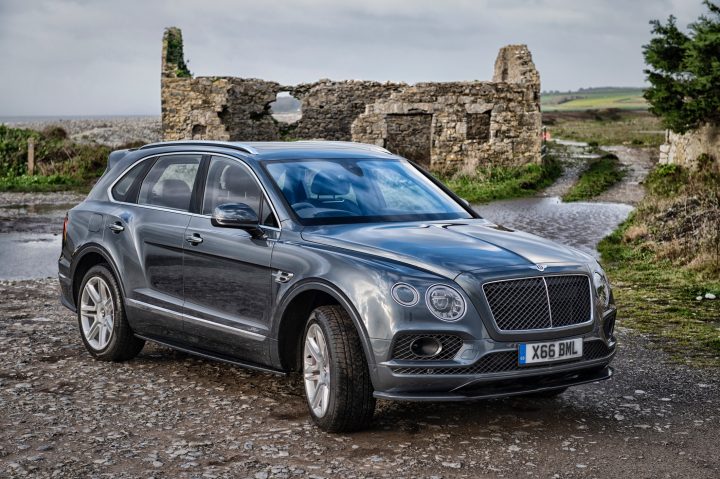 The Bentley Bentayga Speed has gold-plated the booming SUV sector.

Enthusiasts of the winged-wonder-cars possibly thought Bentley was mad to add an SUV to its luxury saloon, convertible and coupe line up but, of course, this is no ordinary SUV.

Top end rivals have gone down the performance route but Bentley has brought sophistication with speed, comfort with capability and created what can truly be described as a Grand Tourer, which also happens to be the fastest SUV on sale today.

If you have the wherewithal, the Bentley Bentayga Speed could be filled with bags and fuel, pointed towards the Mediterranean sun and the miles would roll by without stress or strain. Following the 18thCentury Grand Tour of Europe so beloved of the rich and often infamous aristocracy would be very much on the cards with this car.

Taking its name from an iconic rock outcrop on Gran Canaria, a concept for the car was shown in 2012 before it went into production in December 2015 utilising a modular platform from parent Volkswagen Group shared with the Audi Q7, Q8, Porsche Cayenne and Lamborghini Urus. 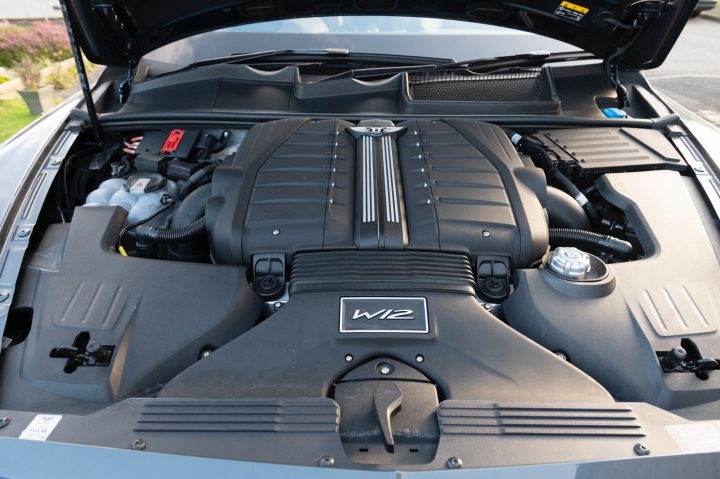 All Bentayga models are permanent four-wheel-drive while the latest top Speed edition is the most powerful and fastest in the series and most expensive SUV fitted with the acclaimed 12cylinder petrol W or double-vee design of nearly 6.0 litres.

That means its emissions are high and an owner pays a hefty bill in road tax and BIK for six years on top of a sky-high insurance premium and fuel bill. Some will definitely think that it’s worth the money for the luxury, refinement and enjoyment it delivers along with the effortless performance. 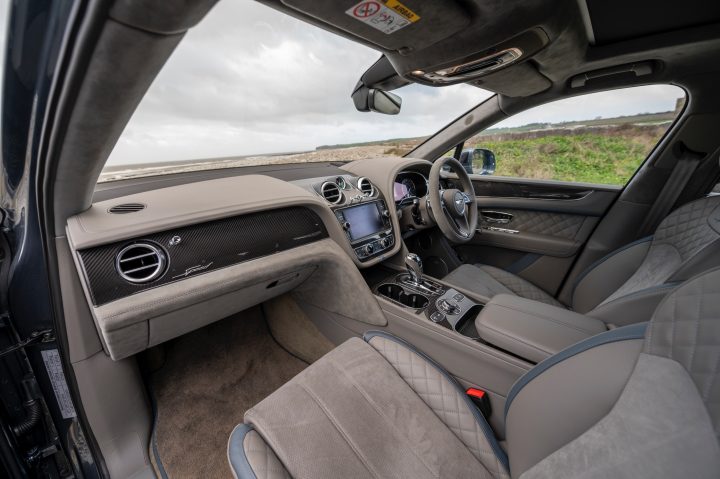 It is a very big car and it seats from four to seven depending on configuration and the bootspace is huge with a high flat floor, square sides and back. At the other end the bluff front conceals a compact engine with very little to see despite its size because many plastic covers hide the working bits and only fluid fillers are visible. 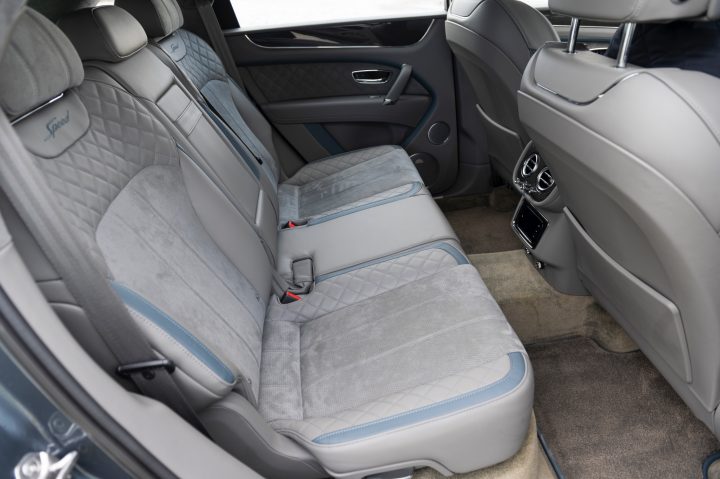 Open the doors and the luxury immediately impresses with a few of our passengers expressing sharp intakes of breath at the leather and alcantara upholstery on the test model, the thick carpets with brightwork accentuated fascia, and a couple commented on the full length sunroof bathing the interior with light.

Access is very easy despite the high floor and once inside the deeply padded but supporting seats with multi-adjustable sections on the front pair, are really comfortable mile after mile. Room is outstanding.

The high riding position not only gives a clear view of surroundings but with the deep side windows and low waistline it’s easy to judge parking and manoeuvring. Huge wipers both ends, powerful washers and extremely bright, long-range automatic headlights leave nothing out of sight. 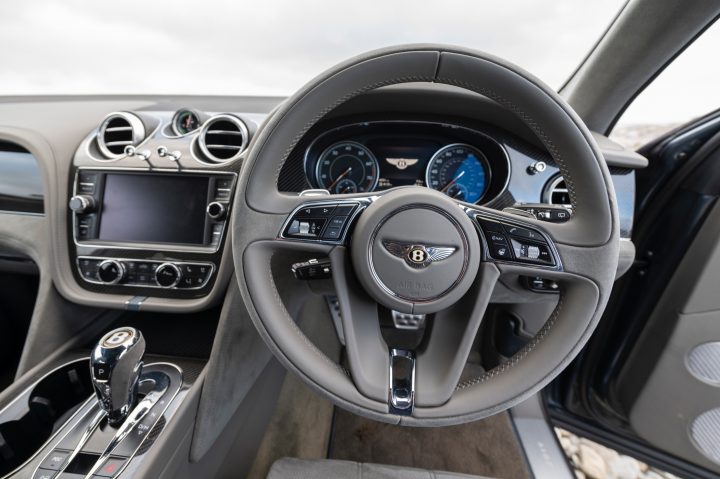 For the driver, all controls immediately fall to hand or foot but I was surprised to see some stalks looked like they came out of a VW parts bin and their simplicity contrasted with the ornate controls on the fascia. The dials infront of the driver were huge giving clear indications of road and engine speed, fuel and temperatures.

A multi-mode panel between the two main instruments covered status overall and live data and was pin-sharp in presentation. I liked the throw-back ventilation controls for the very efficient air conditioning throughout and the modern wifi remote for those in the back who have their own pad device.

On the central console the eight speed automatic transmission lever had full auto or sequential manual and supplemented with up and down paddles on the column. 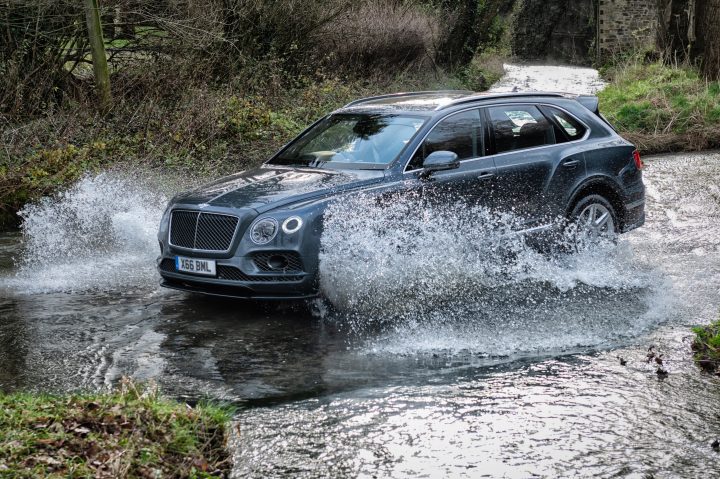 Behind the lever was the start/ stop ignition button and rotary selection for four ride and multiple traction modes. It defaulted to a standard Bentley mode for the ride offering the adjudged best compromise but I usually went for the comfort as opposed to firmer sport or harder competition setting.

The engine made little noise upon starting and then ran almost silently at idle and up to the legal maximum a gentle throttle opening was accompanied by a pleasant ‘whooshing’ sound. Pressed harder or in the sport and competition settings and there was a throaty, rasping sound from the engine as the power poured out but it was never unpleasant. Gearchanges were silky in comfort mode but noticeably quicker and edgy when other modes were selected but the responses were always instant with no delay.

I loved the huge, powerful and progressive brakes underfoot which undramatically slowed from any speed without fade or excessive effort and the button parking brake securely held the 2.44 tonnes car on our usual steep test slope. 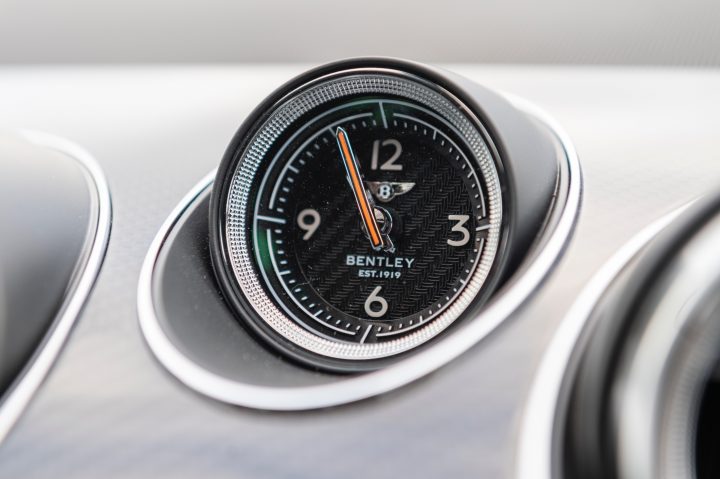 Acceleration was so deceptive. Driven gently it was brisk but seek out the performance modes and it transformed into a sports car, a 2.44 tonnes sports car, with stunning acceleration for overtaking in complete safety. All the time it was never showing or sounding stressed, remaining sublime and relaxed.

Turning to the steering, it was well weighted and finely varied with speed so it was precise at motorway speed and almost effortless to park except the turning circle did not make it nimble 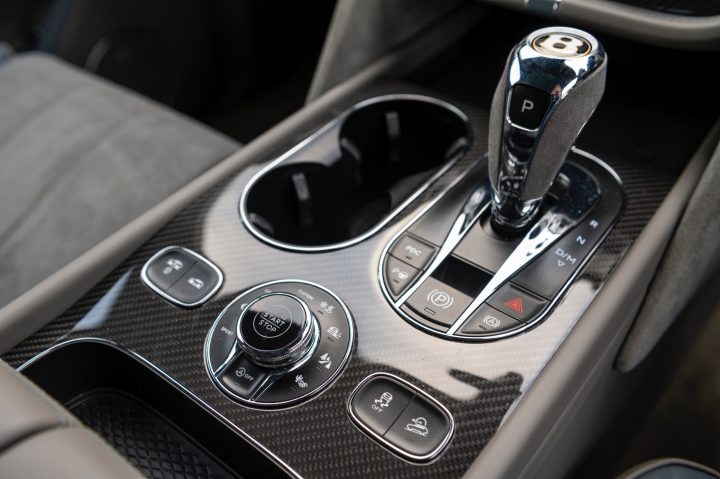 The Bentayga’s adjustable suspension ranged from comfortably compliant through firm to hard and mild road and tyre noise was ever present. It was also useful to be able to raise it for rocky tracks or wading and adjust for soft or low grip surfaces and the Speed has electrical anti-roll system to keep tyres firmly on the road putting down maximum grip.

The tyre noise was the most noticeable sound in normal driving, with engine muted and wind noise surprisingly low for such an upright design. It may have been helped by the aerodynamic skirts and rear wing guiding air around and over the body. 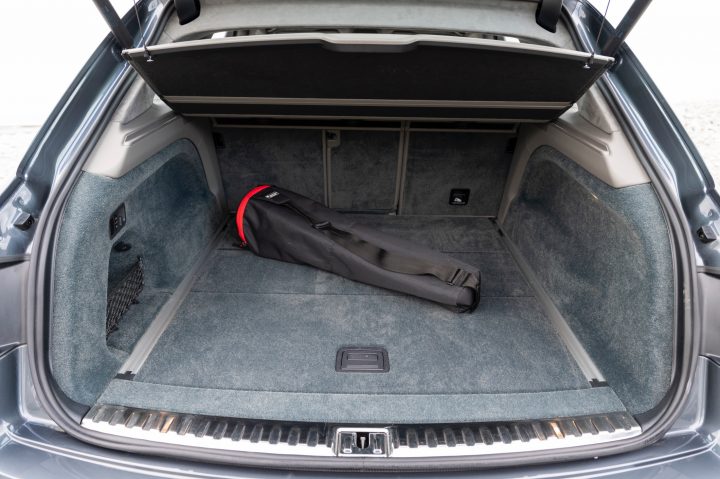 Handling was always delightfully controlled through the steering, brakes and suspension and it could be hurried along winding sections with confidence as well as composure on motorways. Its size seemed to matter less the quicker we went, so responsive was the engine, gearbox, steering and brakes.

Overall our economy was just under 20mpg but we did see it stretch to 22mpg at the steady motorway maximum only to drop to about 18mpg on a cross country trip. Even idling it indicated the equivalent of 1.1 mpg. 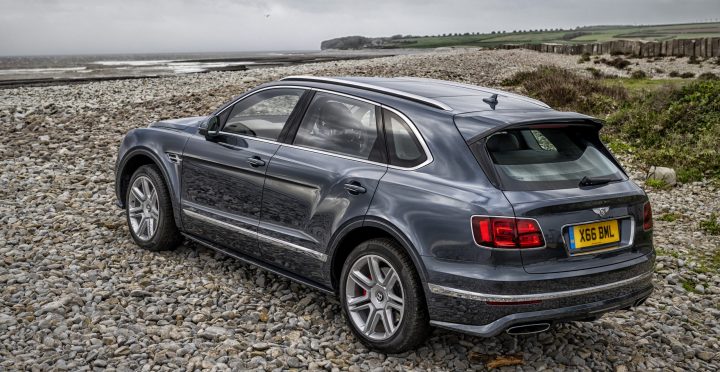 Such a sophisticated car means a lot goes into it. Unfortunately during our test over a few days an oil warning light came on within hours of handing back but there was no apparent low level or high temperature and we believe it was a faulty sensor.

It just shows that every car can be susceptible to sensor errors and is not perfect, but with the Bentley Bentayga Speed it comes pretty close in my eyes.

The global sales of SUVs show no sign of slowing and with Aston Martin preparing to launch its DBX at the end of 2020 the competition will be intensifying. So it will be interesting to see how the Bentayga Speed will stand up in a very exclusive echelon of models. 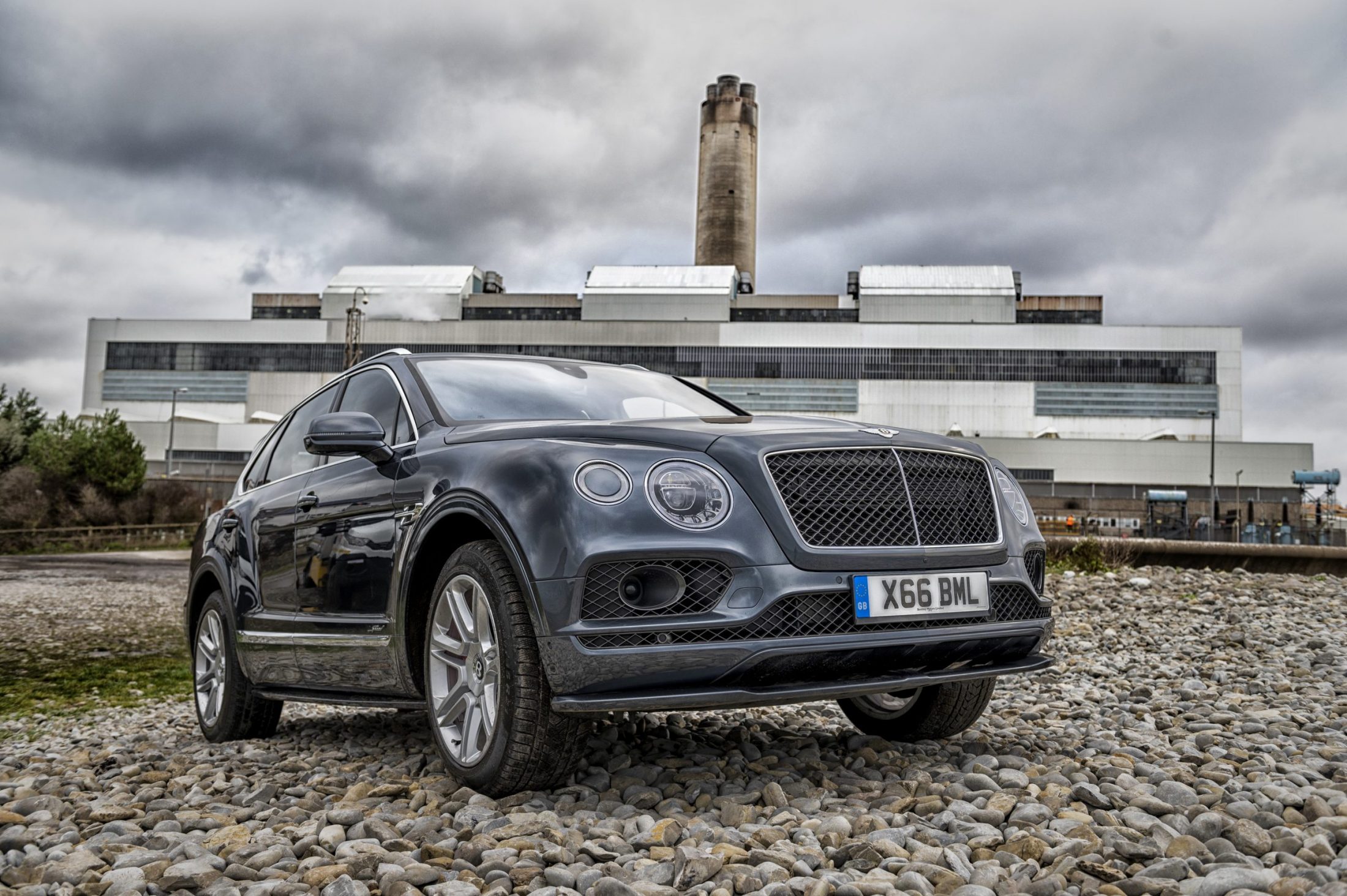