The Audi Q4 e-tron really is shaping up to challenge in the pure-battery electric car sector with its first compact SUV. 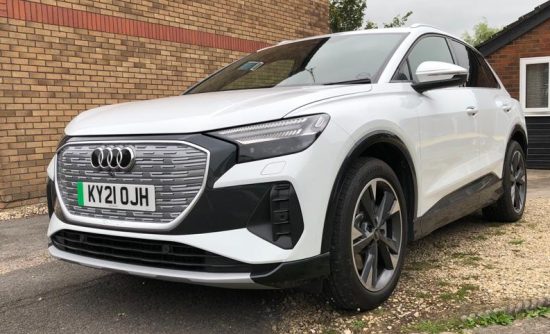 As befits Audi, the Q4 e-tron is available with a wide choice of power units, 125, 150 or 220kW outputs from two battery capacities, rear or all-wheel-drive and four trim levels including a well-specified launch edition.

Depending on the battery pack chosen and charging facilities the Q4 e-tron can be boosted from low to 80 miles in ten minutes and in under 40 minutes up to 80% energy for approximately 245 miles range.

Those are the bare facts. Surrounding them, literally, is a body-shape dictated by the desire to use air-flow to maximise what happens underneath and on the ground.

Most prominent is an “active grille” which is shut to quicken warm up and opens to cool the engine if needed when the on-board computer decides. It also has clever aero features to enhance airflow and lower resistance around the wheel-arches, door mirrors and over the roofline. 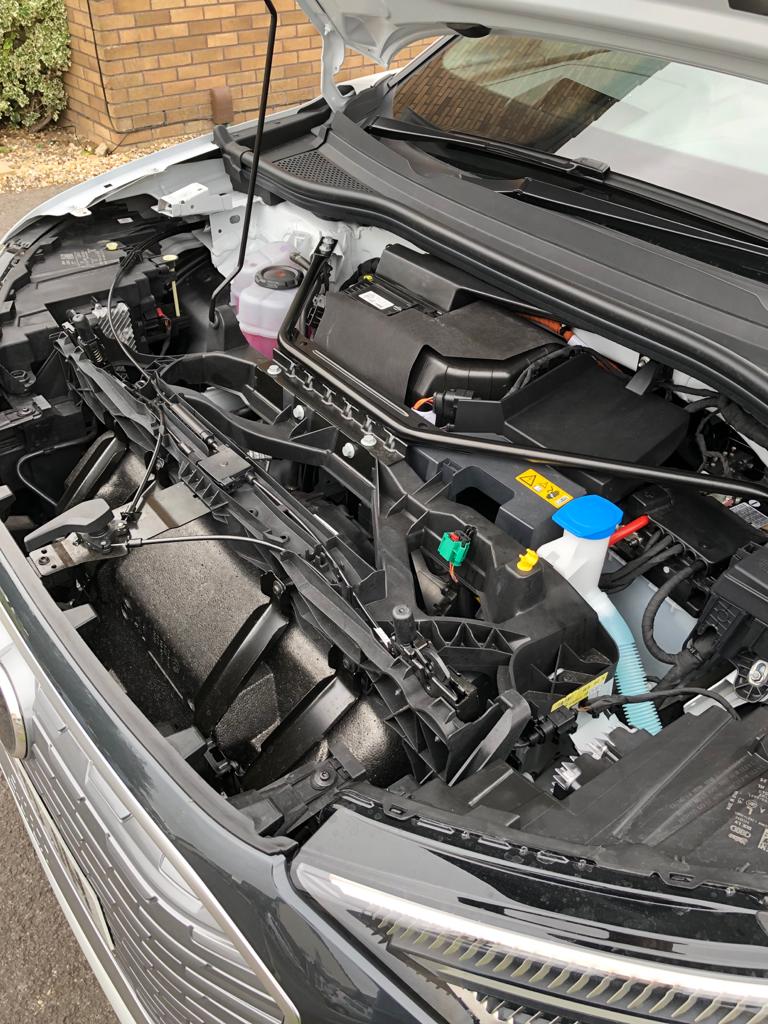 Underneath the transmission is optimised to extend economy and range with progressive retardation selection on the paddles you normally see on a column in a car equipped with DSG drive. What is possibly more surprising, well it was to me, is the use of drum-brakes at the rear on the test car as the system’s normal electric retardation works well and a lightly used pair of rear discs would be prone to deteriorating sooner than a drum system. With the mid-range power output the Q4 e-tron test car had a sharp getaway from standstill, briskly dispatched   overtaking and maintained motorway speed and kept up with traffic.

In speed terms it was every bit as good as a petrol equivalent. 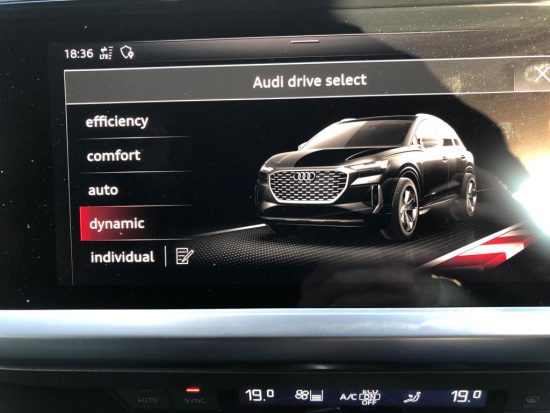 The matter of range depends how you drive it, eco, normal, sport or through individual settings and then you can eat into the 294 miles we saw from two full charges at different rates. With retardation settings maximised we consistently saw the range grow despite covering ground, which sort of goes against what seems logical.

Those individual settings can adjust steering weight, transmission responses and ride/ handling so a driver can vary them to personal taste, just as with other expensive Audi models.

It is a technical tour de force and needs some time to familiarise but learn how they work and a range of benefits is there to be enjoyed. 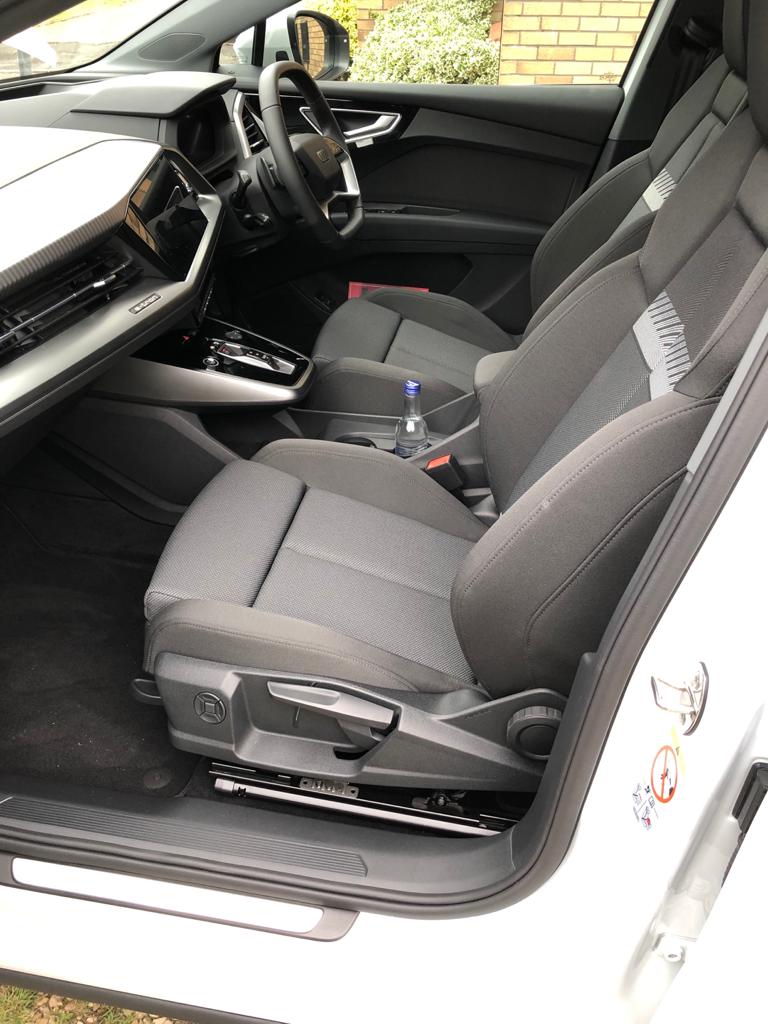 The sporting feel to the powertrain is matched by a nicely weighted steering system with a good turning circle and no kick-back while the electric motor’s retardation is immediately felt when lifting off and before applying the footbrake so the Q4 e-tron slows and stops under control and quickly. An intelligent parking brake holds the car in traffic or on a slope and instantly releases as the throttle is brushed. With struts at the front and links to the rear, the Q4 e-tron rides well over most surfaces and put down power very well without any vices showing up. It felt slightly nose heavy in tight turns but that retardation really pulled it back on line when easing off.

Some bumps did find their way into the cabin but I suppose that’s inevitable with the big wheels and tyres fitted. 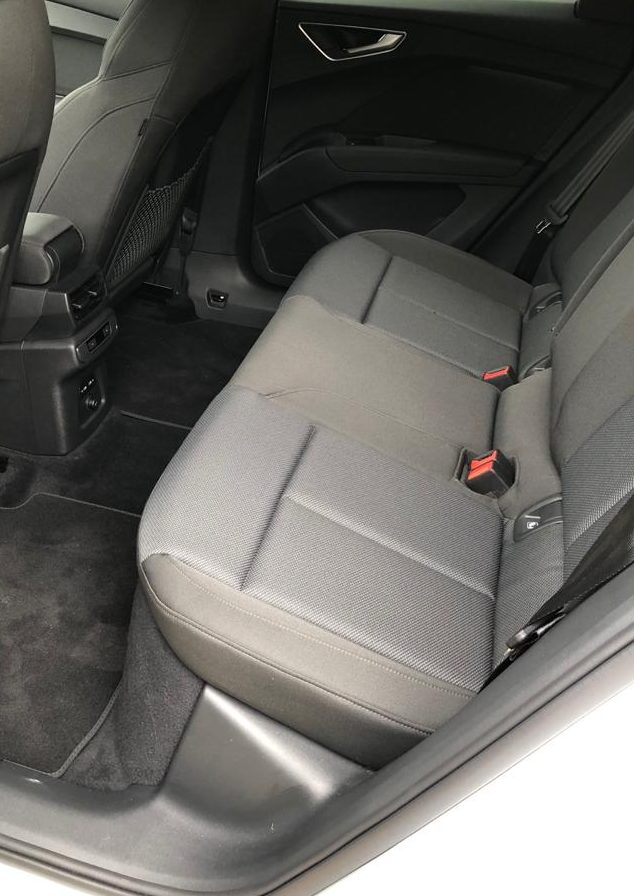 You could hear the system working away but otherwise it was a quiet car with near absence of powertrain noises and extremely low wind generated sound.

The cabin was roomy for five with good access and excellent seats for long journeys, an offset split dramatically raised the luggage space and it had a good shape to the loadbed. Inside, oddments space was good.

Visibility was generally good to front and sides, slightly compromised by the c-pillar over the shoulder but there were sensors and reversing camera to assist. Lights and wipers were very effective. 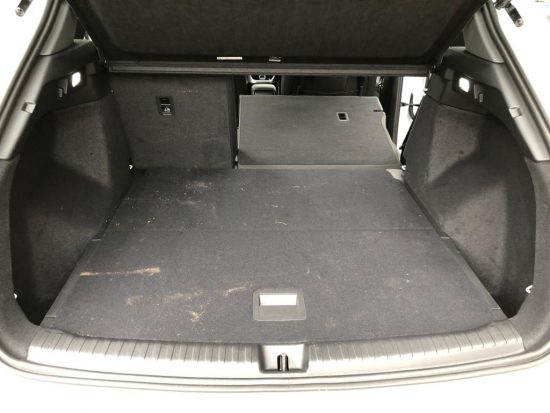 For the driver the main controls are simple and straightforward, work well and are sensibly placed with, thankfully a row of climate control switches under the very big central infotainment screen, but I did find using this was distracting and not as easy as it could be with progressive menu selections for features.

The climate control did an excellent job and was also optimised to save energy as it pushed out huge volumes at selected temperatures and into all corners of the cabin. 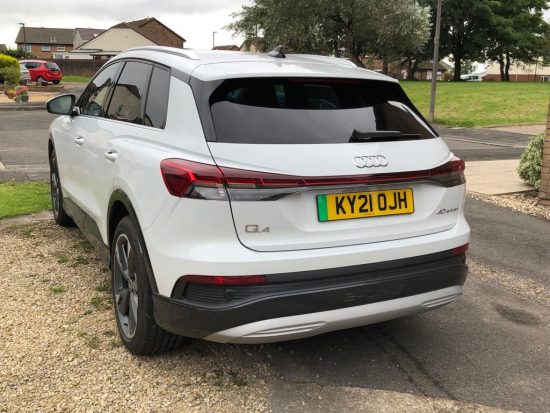 The Audi Q4 e-tron is a technical masterpiece but its  price means it does not qualify for HM Government plug-in grant assistance and you pay a higher road tax duty for five years.

Good to see it comes with both three-pin and fast charger connections to maximise refuelling opportunities. And yes, even with disc and drum brakes at this price to make you smile.