You are here: Home / 2019 Motorsport / Two & three-wheeled fun this weekend 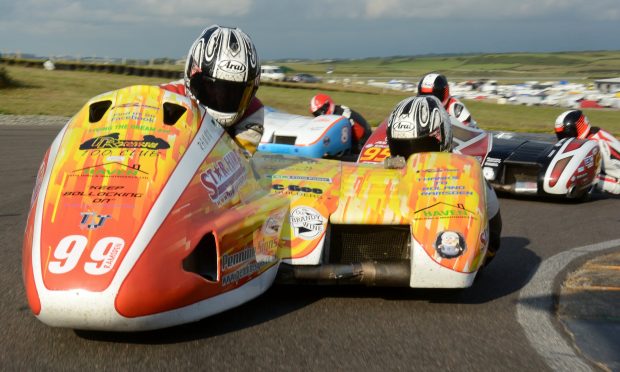 This weekend marks the half-way point in the British sidecar series and Peter Founds & Jevan Walmsley (LCR Suzuki), have a commanding 65 point lead after winning six out of the seven races.

They dropped points only in race one at Donington Park, finishing as runners-up to Lee Crawford & Scott Hardie (LCR Suzuki), who occupy second place in the Super F2 title at the present time.

Both of the aforementioned teams had a successful visit to the Isle of Man last month for the Southern 100 Road Races. Founds & Walmsley won the ‘Sidecar Championship’ race, with Crawford & Hardie third. Unfortunately, it was not such a fruitful visit for Steve & Matty Ramsden. who were involved in an incident in the opening sidecar race.

They will be particularly disappointed to be missing Anglesey, having taken a win and a second place in last year’s event. Both Steve & Matty are making good recoveries, and will no doubt be back competing as soon as possible – all at the FSRA wish them well and look forward to seeing them back in the paddock soon.

Consistent finishing in the top six has seen John Lowther & Sarah Stokoe (LCR Honda) establish themselves in a solid third place in the points table. At the previous round at Cadwell Park six weeks ago, Ben Binns deputised for Sarah, and he and John took a brace of podium finishes.

Sarah had been suffering from a hand injury as a result of an incident at the TT Races alongside Mike Jackson, another front-running driver making encouraging progress after injury. Sean Hegarty & James Neave (Baker Honda) have four third places in their last five starts, and they will be aiming to build on this form.

The 2018 F2 Cup winners Daryl Gibson & Ashley Moore (Shelbourne Suzuki) will also be hoping to score highly; following a slightly disappointing opening two rounds, they had a busy weekend at Cadwell Park, which saw them improve in every session, placing fourth in the final race of the weekend to end on their best result of the year to date,

The F2 Cup (these machines are identified by their use of yellow rather than white race numbers) is becoming a fascinating competition, with several teams vying for supremacy. Simon Robinson & Kez Hughes / Mick Fairhurst (LCR Suzuki) top this category; a single win backed up by high scoring in all other races has proved key to the team’s success and they hold a 29 point advantage over Rob Atkinson & Glenn Dawson (Bellas Suzuki).

Due to work commitments, Atkinson missed the opening round at Snetterton but has taken double wins at both Donington Park and Cadwell Park and will be amongst the favourites again this weekend. The 2018 FSRA Pre-Injection champions John Shipley Jnr & Milo Ward (LCR Suzuki) have made the transition to British F2 Sidecars admirably and are currently third in the standings. Other contenders in this sub-class should include Kirkup & Brown, Ilaria & Lace and Giles & Jen Stainton.

Last year Wirral Hundred did a sterling job completing the entire F2 programme after losing most of Saturday because of horrendous weather. As a result the Super F2 lap record set by Simon Neary & Dipash Chauhan in 2010 (1:12.668) remained unchallenged; perhaps it was fall this weekend.

Finally thanks to the Wirral Hundred club for their support this weekend, and to the ACU and our series sponsors, listed elsewhere in the programme, for their continuing season-long support. 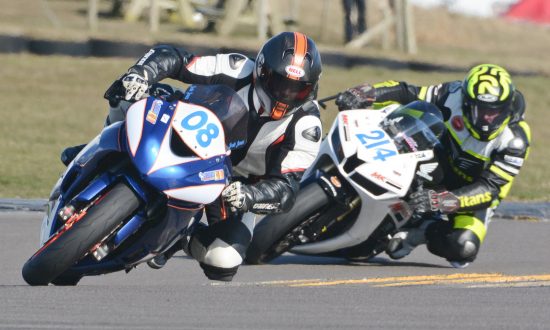 The Wirral 100 Motor Club return to Anglesey Circuit for the third of their four race meetings at the venue this year, writes Andrew Hughes.

As usual this motorcycling festival brings together the camaderie and sheer fun of club racing plus the cream of British Formula 2 sidecar competitors competing for national titles. More racing laps are planned than usual so it is sure to be busy.

With three of the five rounds of the club championships completed, the various race classes are now beginning to take shape.

Six weeks ago, the under-the-radar Scotsman Scott Shand impressively won all four of the Powerbikes races but with Graham Hornby, James Chawke and Joey Taylor all within striking difference, the order could change significantly by Sunday evening. These ‘modern’ bikes will share track-time with the club’s unique class for Pre- 2009 Pre-Electronics Powerbikes, where the hugely experienced Jon Wight (R1) and Adrian Kershaw (ZXR 750) are having great fun at the front but the far-less experienced Gerallt Ellis from Bala is having his best season to date and is a close third.

The Formula 600 class has seen a reduction in experienced rider numbers over the last twelve months, but this has given others an opportunity to come to the fore, no more so than Chris Eden currently leading the championship by 26 points. But with a total of 60 points available to the winners this weekend, the emerging young men Carl Jones and Eoin Collins will be seeking to move up in the standings, whilst it will be impossible to ignore Adrian Kershaw, a two-times winner in June,.

The Golden Era Supersport class has emerged as one of the best-supported classes and all six of the leading contenders are here again this weekend. Simon Robins had an impressive start to the season but in June it did not go all to plan and the pursuing pack, particularly James Leatham, Damian Davis and Ray Stevenson, now have him in sight. The Golden Eras share track time with the 650 Twins where the consistent Tim Sayers has built up a 38- point lead over Mike Brampton, the champion for the last two years. So, if Sayers finishes second to Brampton in the eight remaining races this season, he will be the champion. No pressure then!

Jon Wright also leads the Pre-Injection class, which is for any bike over 500cc with a carburettor, and his lead may become almost unsurmountable after this weekend. These older, bigger bikes share the track with Forgotten Era (up to 500cc), where there is a great battle going on between Ian Riley, Phil Millard and Stephen Kennedy, the three only separated by 14 points. This weekend it is likely that these three riders will also be competing for the bragging rights in the 100-500cc All-comers races.