Apex Evolution sees students from the Swansea campus of Trinity St David’s University working with Luc to prepare the bike and run it on race weekends with support from Hereford based STP Motorbikes and from Peter Hughes Media, based in Torfaen.

The team was unable to take part in the first practice session of the weekend while the second was curtailed with a clutch problem. With the third session held in heavy rain, Luc went into qualifying with just four practice laps under his belt.

The rain retuned before the first race, however, and competitors lined up on a drying track. Luc decided to gamble on using dry weather tyres and while he was off the pace for the first four laps he was then able to begin working his way through the field, setting quicker lap times each time he crossed the line, to finish in sixth place.

As the riders lined up for the second race heavy rain fell once again but this time only on one section of the circuit and competitors were given two warm up laps to familiarise themselves with the conditions.

Luc continued to improve his pace, coming from eighth on the grid to fourth place, making up a two second deficit in a single lap with six laps completed Luc was right on the tail of the second and third placed machines and podium placing looked a distinct possibility.

Unfortunately, red flags then brought the race to a premature conclusion and the young Mauritian rider had to content himself with fourth place overall and a fastest time of the race for one sector of the circuit, the first time he has achieved that at a Thundersport meet. 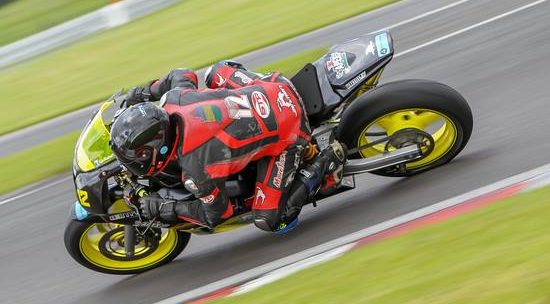 At the end of the week, Luc was full of praise for the bike and the work done by the Apex Evolution team. “The bike is set up really well”, he enthused, “It’s a brilliant bike to ride and the team have bonded really well.”

Describing the first race as “quite lonely”, he was delighted with the progress that the team made across the weekend saying there is only one ambition they can have now. “We have to win a race”.

For the University students, Nick Long commented “We learnt a lot over the weekend and I am pleased we worked so well as a team. We even managed to have fun. I know we can get a lot more out of the bike.”

The next scheduled race weekend for the Apex Evolution team is at Rockingham in Northamptonshire from 29 to 31 July.