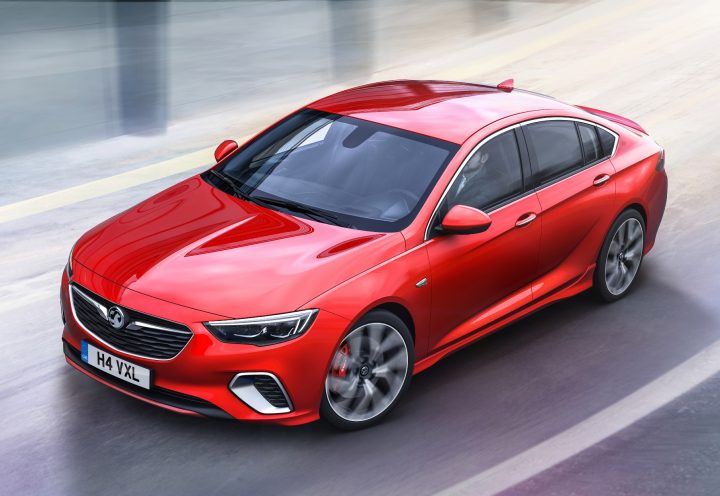 Prices start from £33,415 on-the-road with both engines costing the same, only the price of the body style differs. In addition to the availability in both body styles there are two, four cylinder engine choices for the new GSi models. 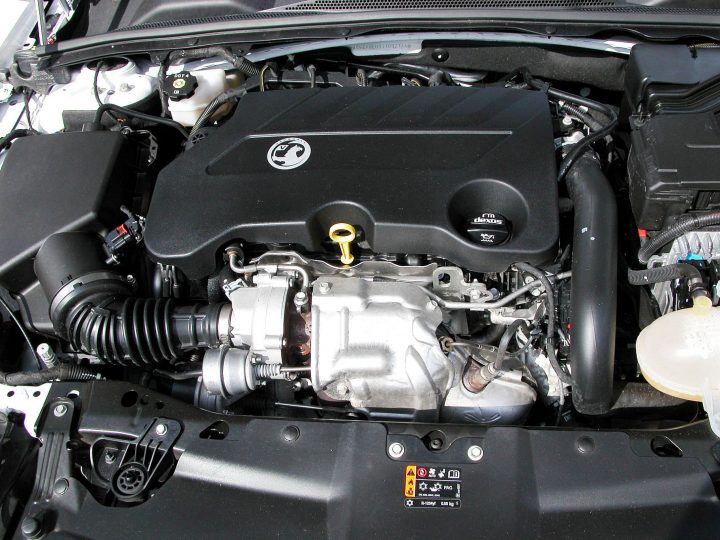 In Grand Sport hatchback body style the Insignia GSi petrol achieves 0-60mph in 6.9 seconds and has a top speed of 155mph, the diesel‘s corresponding figures are 7.3-seconds and 145mph. Combined Cycle fuel economy is 32.8mpg with CO2 emissions of 197g/km for the petrol and 40.4mpg and 186g/km for the BiTurbo diesel. 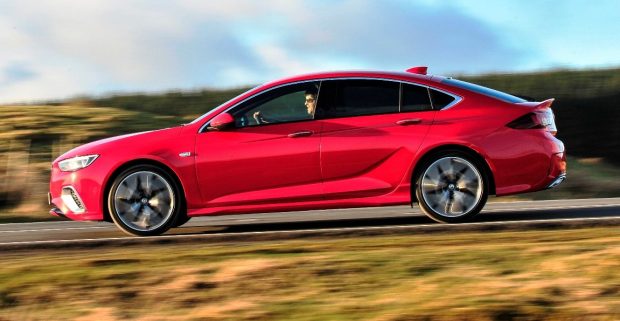 On the inside, the GSi features full-leather front sports seats, aluminium pedals, eight-inch colour information display with navigation, plus a Bose sound system and head-up display.

Four driving modes are available through the GSi’s FlexRide system, allowing damping, steering, gear change-up points and the car’s stability and traction systems to be configured according to a driver’s preference. The Tour mode felt the best suited to our road conditions most of the time.

Despite the castigation of diesel powered models Vauxhall still expects the BiTurbo engine and the Grand Sport five door hatchback body to be the most popular version with sales/leasing mainly to high ranking business users with a healthy demand further down the road from retail used car buyers wanting a roomy good looking, highly equipped sports machine.

Going with the flow of what is likely to be the most popular Insignia GSi model I slid behind the wheel to test drive for an extended period the Grand Sport version with the potentially most popular BiTurbo diesel engine.

The Insignia GSi could be one of the last wholly Vauxhall/Opel model range developed solely by them and all future models will come through their new partnership with the French PSA Group and indeed that is already underway with the Crossland X and Grandland X SUVs. 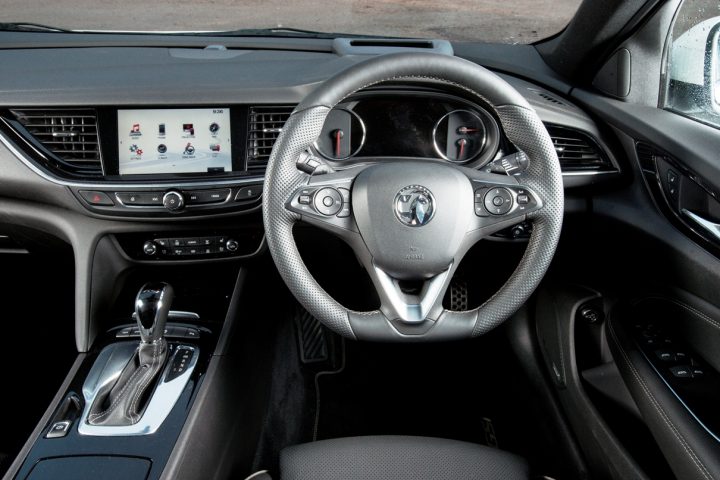 The Insignia GSi effectively replaces the VRX8 Saloon, now defunct from the Vauxhall line-up with new emission regulations in force.  The GSi badging has been reintroduced by Vauxhall 25 years after first used for ‘hot’ Corsa models. A new Corsa GSi 1.4-litre 150hp turbo petrol model will the Corsa VXR.

Like other models in the Insignia’s range, the GSi has shed weight – in this case, 160kg versus the first-generation VXR which preceded it. Combined with a 10mm lower ride height, the difference improves the steering, body control and overall agility say Vauxhall. They make much ‘marketing speak’ from the fact the GSi is the fastest Vauxhall yet around Germany’s Nurburgring, where much of its chassis development was carried out, and is a full 12.0-seconds quicker than the outgoing, and more powerful Insignia VXR. 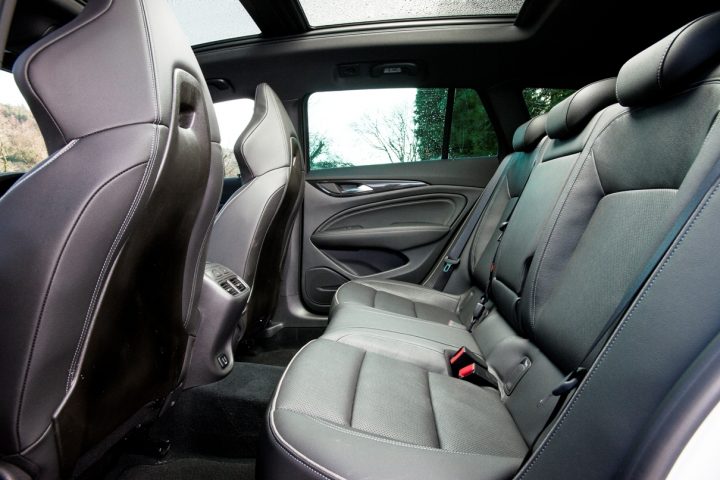 All the GSi exterior styling additions fit the bill giving the already smart looking Insignia more road presence and kerb appeal.  Inside the up-market sports tweaks add a bit more sporting glamour and the spec level is high. Indeed the only annoying missing item of spec I found was the lack of a reversing camera which seems a notable omission given the sleek design and steeply raked tailgate window of the Grand Sport hatchback doesn’t have great rear and rear quarter visibility.  An electronically opening and closing tailgate for the price would have been nice as well.

But it’s the BiTurbo turbodiesel engine, auto gearbox and 4×4 drivetrain that gives the GSi version of the Insignia Grand Sport its main appeal especially for driver’s that cover high mileages. It is very much more of an open road mile-eater than a cut and thrust sports machine. It is far more at home on motorways where it devours long journeys with effortless ease and with excellent traction and stability. Narrower country roads and the big hatchback is more of a handful and lacks the precise handling and agility of its German premium brand competitors. Yes there are various driving modes to select from but I found the Tour mode the most useful and comfortable. 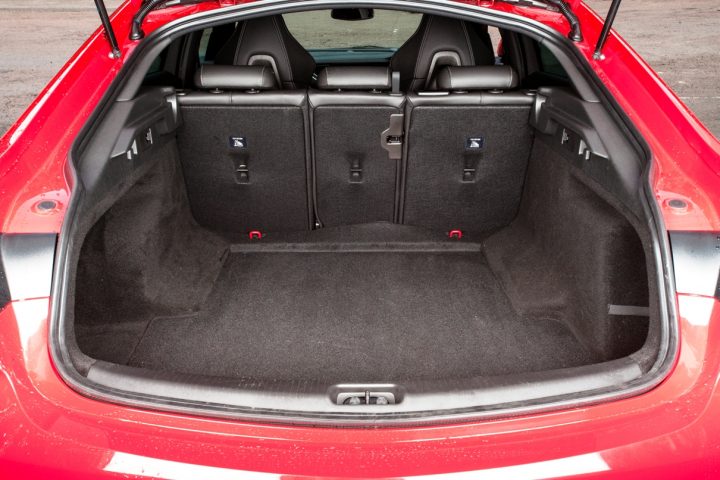 Acceleration right through the speed range is strong thanks to the 480Nm of torque available from just 1,500rpm.   Having said this model is best as an open road cruiser the engine and gearbox still remains user-friendly enough around town and in stop-start traffic where the auto gearbox comes into its own but it’s the open road where it is most at home.

During my 10 days of driving, covering all types of journeys, the real-life figure was 38.5mpg  which given the performance and with the 4×4 drive system was impressive.  It just goes to show that big powerful engines have to work less hard and that leads to the potential for good fuel economy: Less stress on the engine equals better mpg. 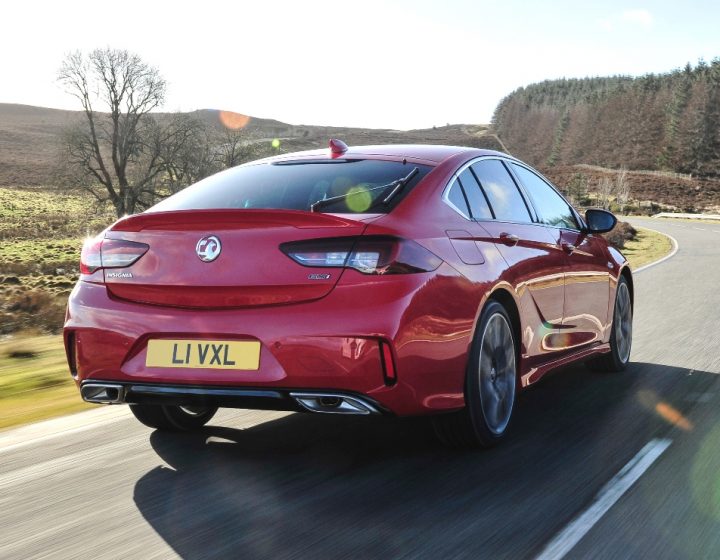 This BiTurbo GSi Grand Sport is only ever going to be a niche model within the extensive Insignia range and lesser powered and lower specced models are potentially better buys for most users. But there is obviously demand from a minority of customers who have the need for effortless speed even in today’s traffic congested world of motoring.