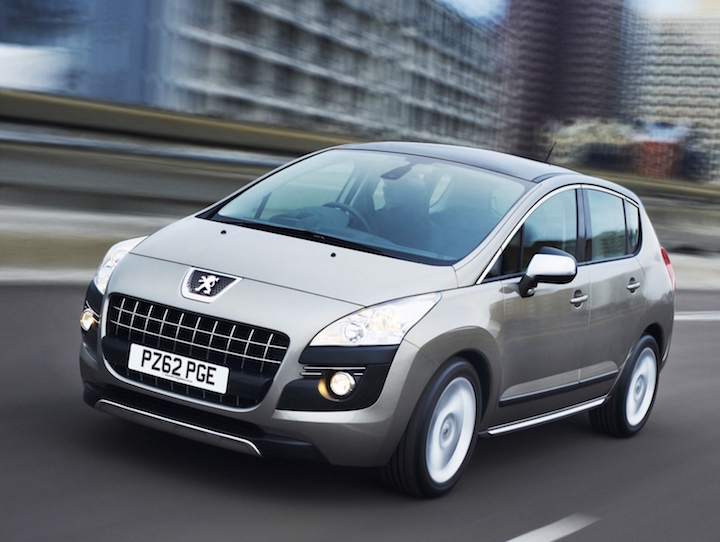 The original Peugeot 3008 Crossover was launched in 2009 and updated at the end of 2013 but remains a golden oldie.

Its main competitor was originally the Nissan Qashqai, still the best seller in the sector, but now there are notable others such as the new Kia Sportage, the Hyundai Tucson, Suzuki Vitara, Honda HR-V, Renault Kadjar, Skoda Yeti, VW Tiguan, Mazda CX-3, Mitsubishi ASX and about to arrive new Crossover models from SEAT, Skoda with a new Peugeot 3008 due in the UK in January next year.

The existing 3008 might be replaced in a little over six months time but what still makes it appealing are the significant price discounts on offer during this generation’s run-out period.

Just a quick trawl of the worldwide web and I found discounts of up to £5,000 on this first generation model range. Peugeot are also offering a £500 deposit contribution with their Passport finance scheme. Officially current prices start at £20,045 and go up to £24,295 but a discount will significantly reduce those costs.

According to early media reports the new 3008 models are expected to start from around £21,000 which is more expensive than the current base model. However the new generation vehicle will have higher levels of specification, Peugeot’s latest clutter-free i-Cockpit, improved infotainment functions, more rear seat knee room, a bigger boot and more muscular and aggressive exterior styling, so in reality it will be a scaled up version of their new 2008 compact Crossover.

Over 600,000 Peugeot 3008s have been built proving its global popularity and around 75,000 have found UK homes. The current array of models is less than the original with the diesel-electric Hybrid4 version and the Access trim level deleted from the run-out line-up. Trim levels are now Active and Allure and the latest generation petrol and diesel engines have been introduced into the range in recent years. These will continue for the new 3008, together with a petrol-electric Hybrid unit, arriving early next year.

The current engine choices are a Puretech 1.2-litre turbocharged 130hp petrol with a manual gearbox, 1.6-litre BlueHDi 120hp turbodiesel with manual and auto transmissions and a 2.0-litre BlueHDi 150hp with a manual gearbox. The 1.6-litre turbodiesel engine is the most popular buy by UK customers. There is also Peugeot’s £470 Grip Control option which utilizes the electronic components already in the drivetrain to improve traction for the front wheel drive system. A circular control knob on the centre console allows the driver to select Standard, Snow, All Terrain, Sand and ESP Off modes. Grip Control also includes Michelin Mud and Snow 16-inch tyres.

My test version was the most popular1.6-litre BlueHDi 120hp turbodiesel with the six-speed electronically controlled automatic transmission. It had Allure specification plus the Grip Control option which added up to an official on-the-road price of £24,565 but haggling during this run-our period for these current generation models will reduce that price significantly.

It is very unusual for me to produce a road test on a run-out model but my test car was booked well in advance of the announcement that a new second generation Peugeot 3008 would be with us early next year. It might be due for replacement but even against more modern mid-sized Crossovers/SUVs the vehicle easily holds its own in terms of ride comfort, ease of driving, high specification, the latest fuel efficient engines and of course the purchase price will be negotiable in a downwards direction.

True the exterior styling is showing its age where it is now common for a muscular look with sculptured panels and sharp styling lines. The moulded exterior design might look dated but look beyond that and you still get a versatile, nice to drive, well equipped vehicle with low running costs.

The 1.6 BlueHDi turbodiesel unit, the most popular choice, produces 120hp and a healthy 300Nm of torque from 1,750rpm. The most impressive feature of this engine is its refinement as it is quiet and really fuel efficient. With the six-speed auto transmission it will officially return 65.7mpg in the Combined Cycle with only 112g/km of CO2 emissions which means a zero cost for the First Year road tax rate and then only £30 for Year Two onwards. In reality my 950-mile road test period the real-life figure was 49.6mpg and that included 600 miles of high speed motorway and dual carriageway driving and the rest was winding and hilly country lanes in Cornwall plus the usual stop-start trips in various towns.

As for performance, top speed is a modest 114mph and the zero to 62mph acceleration time is 12.4-seconds which is adequate. Certainly during my time the fully loaded vehicle cruised very happily at 70mph and the driving was tireless and relaxed. The auto transmission is somewhat slow at changing gears as technology has moved on. It doesn’t have the quick smooth changes provided by the latest generation twin-clutch autos but it does have a sequential manual mode function which can be used for more spirited driving conditions. Personally I was quite happy to leave it in its auto mode and benefit from the very good fuel economy.

Another bonus was the ride comfort as the suspension is very compliant and the 16-inch wheels shod with the mud and snow grippier tyres with the Grip Control function cushioned out the thumps and bumps of potholes. There was some body roll during cornering but generally the handling was precise and the steering well weighted.

Inside it is looking dated with a mass of scattered switches and old-school sat-nav and infotainment systems. It remains easy to drive with good visibility and comfortable seats. A large 512-litre boot can be extended further by folding down the rear seat backs to give 1,604-litres of space and loading the boot is easy with the split tailgate which has upper and lower opening sections.

Bought at the right price these run-out versions of the Peugeot 3008 Crossover can still be the right vehicles in a very competitive market sector.