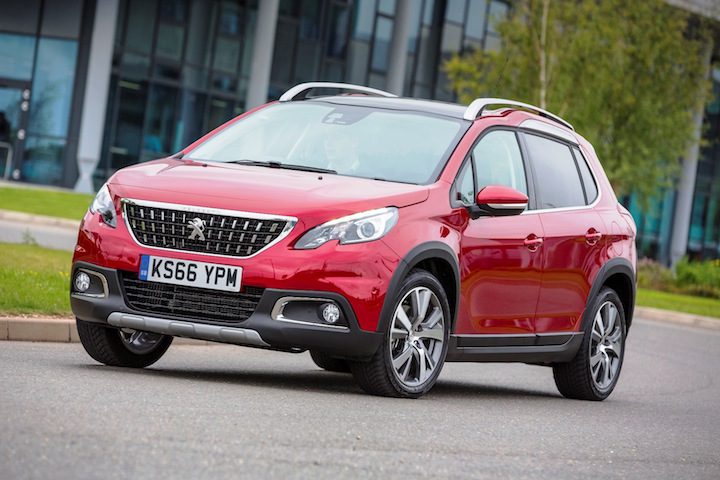 At the Paris Motor Show, new SUVs are at the heart of Peugeot’s model display as their parent company PSA moves to differentiate the style of models from their three brands of Citroen, Peugeot and DS, says David Miles.

Peugeot is exhibiting the new 2008 compact SUV which is already on sale IN THE uk alongside the new and chunkier looking five seater 3008 mid-sized SUV and the new large seven seater 5008 SUV, both due in the UK early next year.

The Peugeot 2008 compact SUV was first launched in 2013 followed by the introduction of new Euro 6 compliant engines last year. The progression continues with face-lifted versions appearing in UK showrooms in June this year.

With close to 600,000 global sales since its first introduction and nearly 20,000 in the UK last year, the 2008 has been a huge success for Peugeot despite the introduction by other manufacturers of numerous similarly sized models. The Nissan Juke, although showing its age in design, continues to lead the way for sales in the UK but it is hard pressed now by the Renault Captur, Peugeot 2008, Ford EcoSport, Vauxhall Mokka and Dacia Duster.

The face-lifted 2008s are now priced, following a recent modest increase due to the fall of the value in the Pound, from £13,970 and rise to £20,920 through Access, Active, Allure and GT Line levels of specification. There is the choice of 1.2-litre PureTech 82, 110 and 130hp petrol engines and 1.6-litre BlueHDi 75, 100 and 120hp turbodiesel units. There is also a choice of manual and auto gearboxes for the two lowest powered petrol units and the 130hp petrol engine has a six-speed manual gearbox. The turbodiesel engines all have either five or six speed manual gearboxes.

Peugeot’s Grip Control function is standard on most petrol and diesel engines from 100hp with Allure and GT Line specification. Grip Control is an adaptive front wheel drive traction system with all season tyres included. This system has selectable Standard, Snow, Mud, Sand and ESP (Electronic Stability Programme) modes and it works very well, a nice go-between where 4WD is not an option.

Currently the most popular engine is the 1.6-litre 100hp turbodiesel unit and the five-speed manual transmission with Grip Control and Allure specification priced at £19,220. This unit and specification officially returns 76.3mpg in the Combined Cycle with CO2 emissions of just 97g/km so they are free from any VED road tax charges – hence its popularity and insurance is relatively low cost as well with a group 18E rating.

Of course there are extra cost options which were fitted to my test spec Allure model but some are standard fit on the GT Line. These extra cost items were Active City Brake costing £250, Park Assist and reversing camera at £500, the panoramic glass roof at £400 plus the sat-nav with Connect SOS and Assistance at £700.

Where the Peugeot 2008 has won over customers is not just value for money and low running costs, it is more to do with its styling, specification and size. Some people will see it having conservative kerb appeal, potentially boring but then those people are more likely to buy the quirky looking Nissan Juke. Certainly the people I see most driving 2008s tend to be older couples or young mums with children where the vehicle is probably the second car in the family and there is now a significant proportion of business user-choosers customers of all ages. 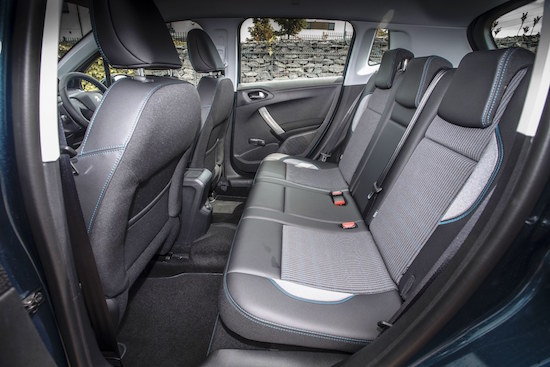 The five door, five seater 2008 is based upon the Peugeot 208 supermini sized hatchback models but with a longer and stronger suspension setup which gives not only greater ground clearance but shrugs off impacts from our potholed roads. It also provides a higher riding height which improves visibility for passengers.

The most recent styling changes include a larger and more sharply styled front grille which does improve its kerb appeal. There are other nips, tucks and extensions around the body including new-look rear lights. Also where the 2008 scores is with interior space which is totally practical given the compact overall length of 4,159mm. This makes it easy to park and versatile for load carrying. 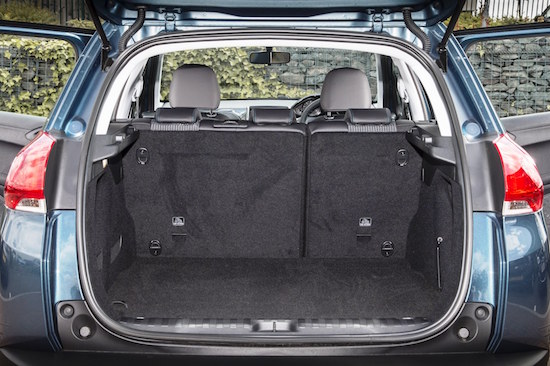 With the easy to fold/raise split rear seats in place there is 410-litres of boot space under the load area cover. Fold the rear seat backs down and this goes up to an impressive 1,400-litres. The good news is that the seat backs fold completely flat so sliding heavy items into the car is easy.

Also there is no rear sill lip to lift luggage over into the load space. There are numerous storage areas, cup holders and seatback pockets to store smaller items such the 2008 scores highly for real-life practicality. 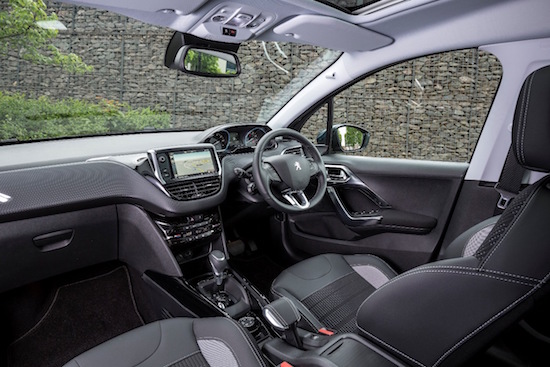 Up front is Peugeot’s i-Cockpit   with its smaller than average steering wheel so the instruments are viewed over the wheel – not through it. The smaller diameter wheel does provide sharp steering response ideal for parking, in-town travel or precise cornering on country lanes.

It can feel a little twitchy on motorways, a small movement brings a large correction but generally I liked it. Other controls are intuitive and it is good to see that the heating and ventilation controls are not hidden away in the multifunction display like some other Peugeot models so they are easy to adjust without the driver taking their eyes off the road. Overall the interior is well thought out and of good quality.

When it comes to the engine of choice, at the media launch I preferred the new 1.2-litre, PureTech, three cylinder 130hp turbocharged petrol engine and its six speed manual gearbox. With the Allure specification not only is it cheaper to buy than the 1.6-litre BlueHDi 100hp turbodiesel five speed version I tried for this road test, but it is perkier for performance and having that extra sixth gear made it just nicer to drive on open roads. The petrol engine has a top speed of 124mph with zero to 62mph taking 9.3-secopnds and my test drive returned 44.7mpg on country roads. With CO2 emissions of 110g/km road tax is zero cost for the first year and then only £20 thereafter and insurance at 19E is only one group higher than the diesel. Costing £18,470 the 1.2 petrol version with Allure spec is £750 cheaper to buy, gives more performance and it would be my personal choice.

However the 1.6-litre, 100hp turbodiesel unit scores better for higher mileage drivers with an official Combined Cycle fuel economy figure of 76.3mpg and with CO2 emissions of 97g/km VED road tax is free every year. During my extended road test on a brief holiday in Cornwall   taking in 500 miles of M5 motorway and A30 dual carriageway driving plus another 300 miles of local driving on narrow, hilly and winding Cornish country lanes, the real life figure was 57.5mpg. That is not close to the official figure but impressive none-the-less. The performance was reasonable enough for most people with a top speed of 112mph and zero to 62mph takes 11.3-seconds. It felt more functional than fun-giving so hence my preference for the 1.2 turbo petrol unit.

Another downside for the diesel unit is the five speed gearbox. It has a long throw gearchange with a long-travel clutch pedal operation and the clutch was prone to judder on takeoff even at low stop-start traffic speeds. During motorway cruising that extra sixth gear would have helped reduce engine noise and perhaps improve fuel economy even further. Negotiating country roads with the five speed gearbox I found myself using fourth gear more than fifth and going up steep hills I was either using second gear at higher revs or feeling the unit was underpowered in third gear. With 254Nm of torque available from 1,750rpm there is no shortage of ‘grunt’, it just needs the better spaced ratios of a six speed gearbox to refine its ability. 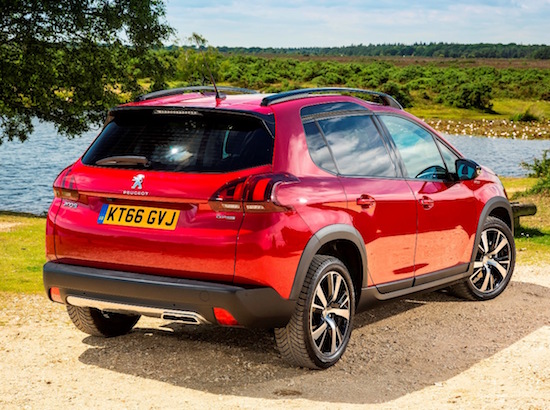 In my 800-miles test mainly on busy roads in some horrendous weather, the new Peugeot 2008 served me very well. It’s a comfortable ride, nimble with sharp steering, well equipped and roomy for its size. It also looks good in a conservative way and I can see why it has become a very popular choice whichever engine the owner chooses.

Against: No 6-speed manual gearbox with the diesel engine, long travel clutch pedal, clutch judder, only adequate performance for acceleration, I prefer the cheaper to buy 1.2-litre, 130hp turbo petrol engine which is perkier and as a 6-speed gearbox.