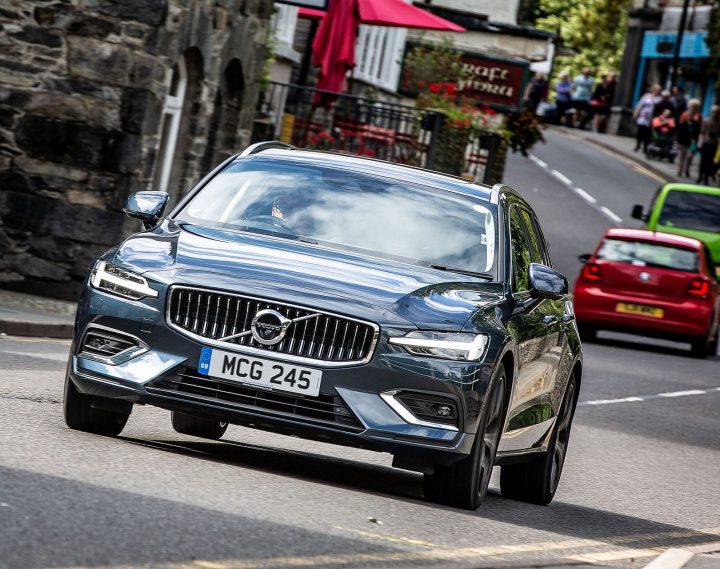 Last year Volvo in the UK outperformed the new car market with sales, and it’s starting off well this year, writes David Miles.

Whereas the market fell by 7%, Volvo increased their sales by 9% to achieve 50,319 registrations with their award winning new range of models

This year the brand is aiming for 60,000 plus sales thanks to the popularity of their SUV XC40, XC60 and XC90 SUVs plus their signatures large and mid-sized saloons and estates such as the V90, S90, the latest V60 estate and the forthcoming S60 Saloon due this Spring.

Volvo was founded in 1927 and eventually the Scandinavian brand fell into the ownership of Ford for 11 years and that ended in 2010. Now it is under the parentage of the Chinese Geely organisation but remains autonomous in most ways developing its own Scandi innovative design-led models as it does battle with the German brand brands of Audi, BMW and Mercedes-Benz.

Last autumn the all-new V60 estate range joined the line-up and since then more new derivatives have joined the line-up.   The 2019 range starts at £31,810 and through 30 derivatives tops out at £40,860. But there are still petrol T4, T6 Twin engine petrol-electric and T8 plug-in petrol-electric hybrids with 4WD to come, along with the S60 Saloons. Also due soon is the V60 Cross Country AWD estate initially available with the D4 190hp turbodiesel engine and priced from £38,270. 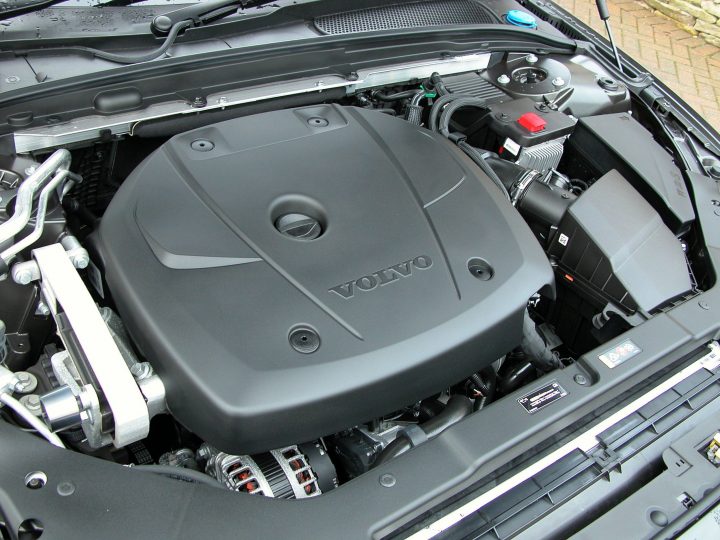 All current engines are Drive-E 2.0-litre all aluminium turbocharged units. These are the D3 150hp and D4 190hp turbodiesels both with manual and automatic gearbox options and the T5 250hp petrol with the standard 8-speed automatic gearbox. All models are currently front wheel drive with other 4WD and the Cross Country AWD versions to come soon.

The current choices of V60 specification levels are Momentum, R-Design and Inscription, plus Pro versions for these three core levels. Competitor estate models are the Audi A4 Avant, BMW 3 Series Touring and the Mercedes C-Class Estate.

Although Volvo don’t give sales predictions they have said the V60 will be one of their best selling models with an expected 65% of UK sales going to fleet/business customers, hence the current bias towards providing more diesel engine options, still the favourite fuel for high-mileage users. The best selling versions is the D3 R-Design manual priced at £35,410 and the automatic at £36,960.

However Volvo has also said they will no longer be developing new generation diesel engines and every all-new car launched from this year onwards will be petrol and petrol-electric hybrids including PHEV plug-in models. True to their word the new S60 Saloon due this spring has no diesel engine choice.

So with that statement in mind, and before the S60 and V60 Cross Country models are available, I’ve just recently tried the V60 T5 petrol powered estate for size with Momentum Pro specification and standard fit 8-speed auto transmission. This model is priced at £36,610 so in its standard form, as it’s under £40k, it doesn’t incur the £310 ‘premium’ price supplement which is added to the £140 Standard rate VED tax payable from year two onwards for five years. 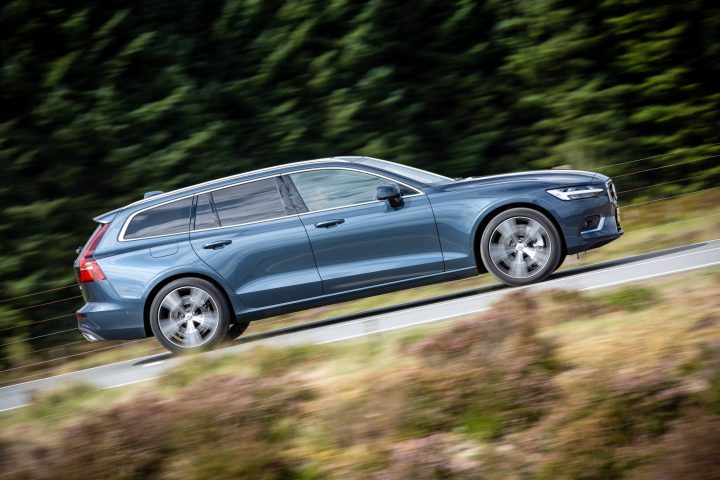 With CO2 emissions of 150 to 154g/km, depending on the wheel size chosen option, the First Year VED road tax costs £205 for the standard 18-inch wheels and £515 for the larger 19-inch versions so stick with standard wheels.

Of course being a premium brand there is also the choice of numerous extra cost options and option packs and my test car had  several of these pushing the price up to £44,210 which then incurs the dreaded added annual £310 second year onwards VED tax penalty. Currently whatever wheel size is chosen company car drivers will pay 31% Benefit-in-Kind tax. All these figures are set to increase from 1 April this year and were announced in the Government’s last Budget so it’s probably best to get your order in now before these higher charges are applied.

The V60 uses Volvos own Scalable Product Architecture, the same as all their other new models and it is built alongside the  XC60, V90 and XC90 ranges at Volvo’s Gothenburg plant in Sweden. The V60 is 4,761mm in length, its 1,916mm wide and 1,433mm high. Giving extra rear seat legroom the wheelbase is 2,872mm. Boot space is claimed to be class-leading at 529-litres and with the rear seats folded down to create a flat load floor with no rear sill loading lip the cargo space is 1,441-litres. 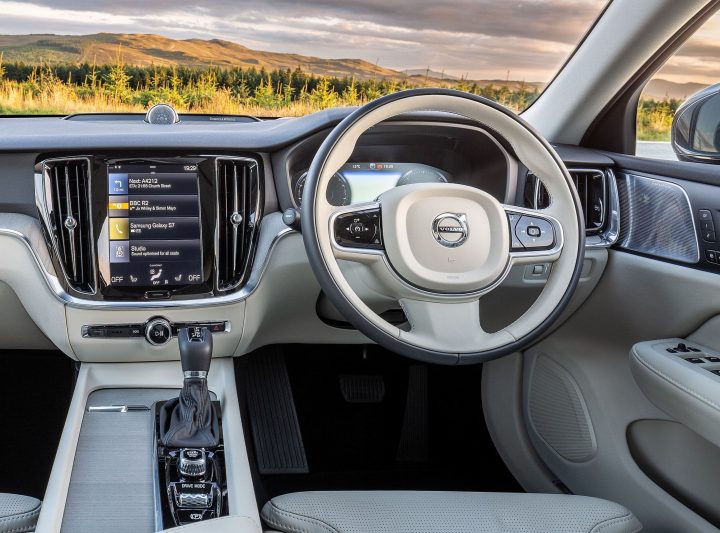 The upholstery, trim and trim inserts varies between the specification levels but all have a high quality appearance and feel to them.  My only issues, as always, are with the Sensus operating system. 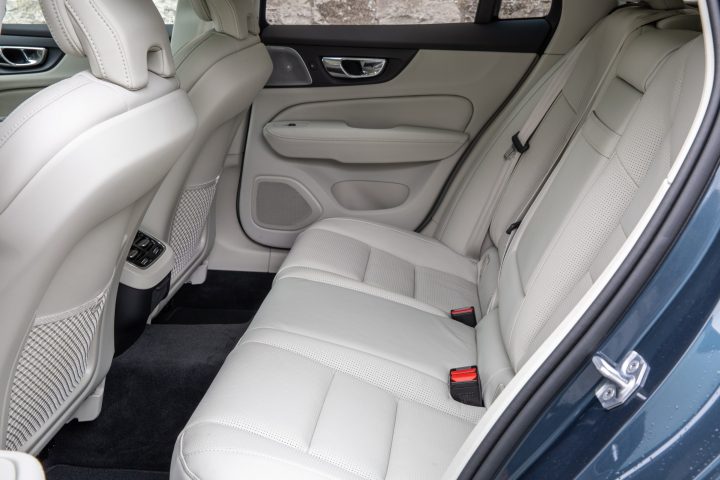 The 2.0-litre T5 four-cylinder turbo petrol engine produces a strong 250hp plus 350Nm of torque from 1,800rpm right up to 4,500rpm so it has a wide and responsive powerband.  Volvo’s own modern 2.0-litre engines, petrol or diesel, are known for their responsive free-revving nature and the T5 unit is the best and most willing of all of them. 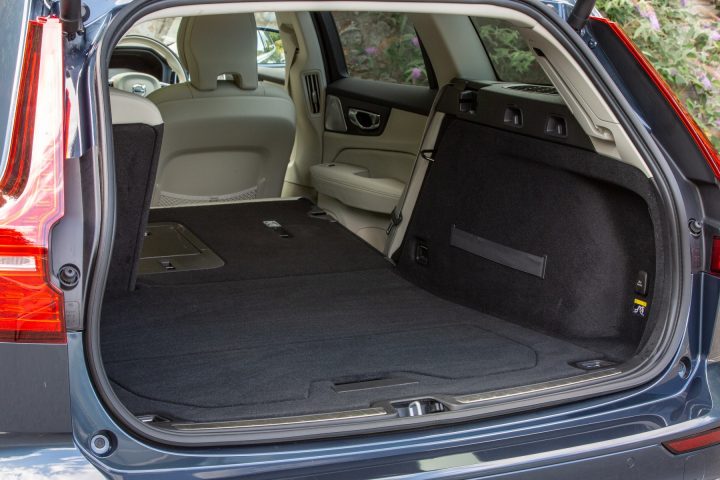 Matched with the 8-speed auto-box and wide torque band there’s no lack of response,or, when needed, low speed smoothness and engine flexibility. There are four Drive Mode settings; Comfort default for everyday use, Eco for fuel saving, Dynamic for more sporting moments and Individual tailors each element to the driver’s own taste.

The zero to 62mph acceleration time of 6.7-seconds shows it has performance on-tap when required. The latest WLTP compliant Combined Cycle fuel economy figure is 42.5mpg but my week of test driving using all types of roads and traffic conditions was only 30.1mpg and that didn’t include any frenzied ‘boy-racer’ driving. OK it was a really cold wintery spell of weather but that was far too much below the official Combined Cycle figure.

Handling is best described as tidy, composed and well balanced rather than agile but it will meet the needs of the majority of drivers rather than a few enthusiastic types. It’s safe, comfortable, roomy, sound and solid. 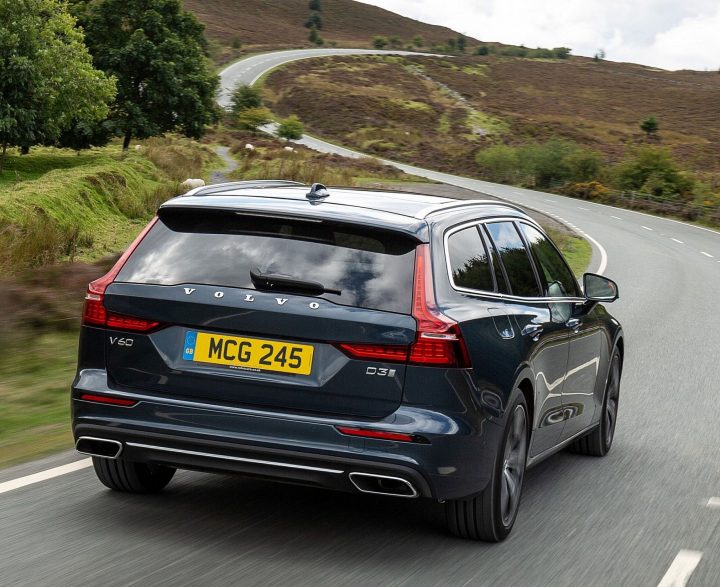 So in short it’s a thoroughly new generation sleek Volvo Estate with the same desirable roomy credentials of Volvo Estates past but with more stylish kerb appeal which will appeal to a new generation of buyers as high sales are already proving.