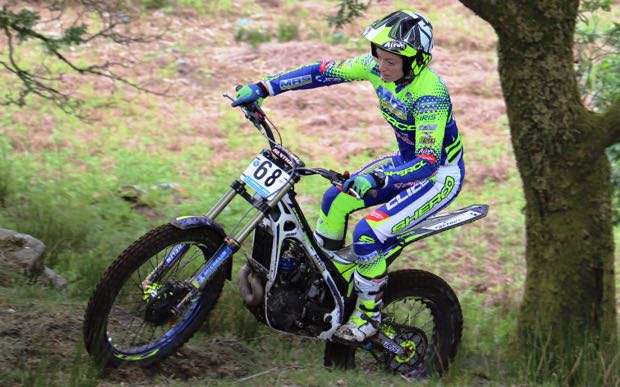 History was made at the weekend on Neath MC’s St David’s Trial, writes Roger Gale.

It has been a feature of two wheeled motorsport in South Wales since the 1940’s, rising to eminence by 1950 as a ‘National’ round, and the reputation continues.

The Trial has changed to suit the modern style of competition, riders and machines. Sundays RT Keedwell second round Trial in the GB Championship, run  over three laps of twelve tough sections high above Aberdulais, was won by Jack Price.

NMC’s Clerk of the Course, James Lamin, introduced some new sections for 2019, in line with rule changes to the series, and the opening test was a baptism of fire wtih riders tacking massive rock slabs on the hillside.

The section named ‘Dragons Tooth’ with one huge sheer rock looking like an impossible obstacle, yet conquered by half the ACU Trial GB riders.

Price started as he meant to go on, as indeed did Martyn, the pair shared the lead tied on points lost over the first three mile lap. Price edged ahead on lap two with the best lap of the day of six marks in the ACU Trial GB class.

Martyn felt the pace a little more by lap three and collected a time penalty, though both stayed well ahead of the final podium placed rider, Dan Peace on an MRS Inch Perfect Sherco 300, who had a difficult first lap, not to his usual very capable standard.

With sections throwing just about every possible demand, including rocky banks, loose stream beds, long rocky gullies and slippery climbs through shale and tree root twists it was a hard day in the sunshine, with the threatened rain blown away.

The evocatively named ‘Stairway to Heaven’ section toward the far end of the course comprised a long steep hill climb above Clyne Woods, never before ‘cleaned’, though on Sunday Martyn got his Beta  clean on lap 2.

Price got through without penalty twice, Dan Peace rocketing through for the triple-crown on his Sherco. The riders had a somewhat easier day with the absence of 2018 Champion James Dabill, a seven time British Champion, and world star, not able to commit to the full ACU series this year due to international riding obligations to the factory Gas Gas Team.

Danby led from his class from the start, and a superb last lap of just seven marks lost put him comfortably clear of Sam Haslam on the John Lee Gas Gas 300, and Richard Sadlers JST Gas Gas 300.

Ben Dignan’s win in ACU Trial 125 category sent him back to Scotland with the leaders  Red Plate, whilst Lloyd Price was hounded all day in the ACU Trial Expert Class by Ladies World Champion, EmmaBristow, who gained her first ever Keedwell British Championship podium in second, the Alford rider just one mark in arrears on her well ridden MRS Sherco300.

Whilst Gas Gas and TRRS riders shared the spoils with the top step of the podiums, no manufacturer was able to block out any of the four classes, with a host of brands sharing the spoils, in what was another well organised and demanding competition by the team at Neath Motor Club, assisted by the kind co-operation of the landowners at Llety Rafel Farm.