You are here: Home / Motorsport / 2021 / Seb slots into second in series after Sebring

Making his first ever visit to the Florida track, 25-year-old Morris (below left) was prevented from claiming the crown when retirement for Leipert Motorsport’s No.10 car two thirds of the way through cost him the driving time needed to seal the title. 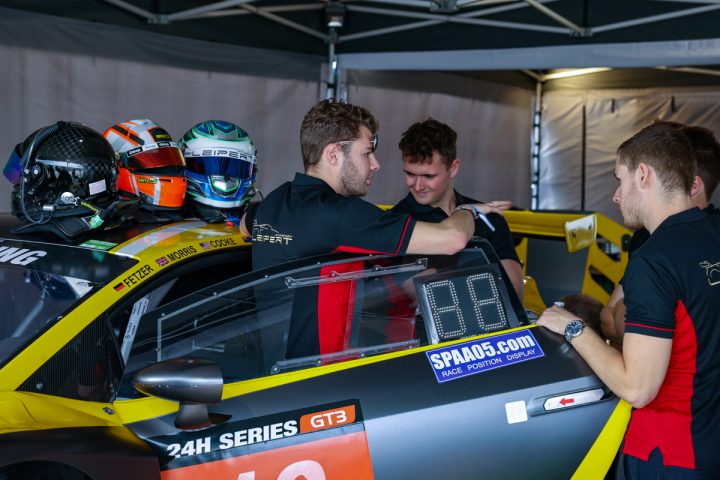 Battling back from a fuel issue – the result of a malfunction at one of the refueling stations – to be in podium contention into the second half of the race, an incident for team-mate Sebastian Balthasar with less than nine hours to go led to a non-finish. With Morris due to complete more driving time later in the twice-round-the-clock race, the championship slipped away through no fault of his own.

Brendon Leitch took qualifying duties and secured fourth on the grid before taking the opening stint of the race, driving well along with team-mates Tyler Cooke, Dennis Fetzer and Balthasar. Pro racer Morris impressed with his excellent pace and the Welshman was delighted with his speed and consistency during his stints – particularly in difficult, foggy night-time conditions.

“It’s a shame to miss out on the GT3 Pro title, but finishing second is still good – we missed it by only two minutes of driving time”, he said.

“I was set to go back in the car at the end and make a big push to the finish, but with the retirement I just missed the driving time I had to complete to be eligible to win the championship.

“I’m really happy with the pace I showed, I was the quickest in the car and did the job I had to in order to keep us in contention, but also to be sensible. The conditions I raced in were difficult, it was dark and really foggy too, which brought with it some rain as well. With Sebring being a concrete circuit it was easy to get in trouble in the wet, so I’m pleased I looked after the car and did my job.”