You are here: Home / 2019 Motorsport / Pendine speed bid in April 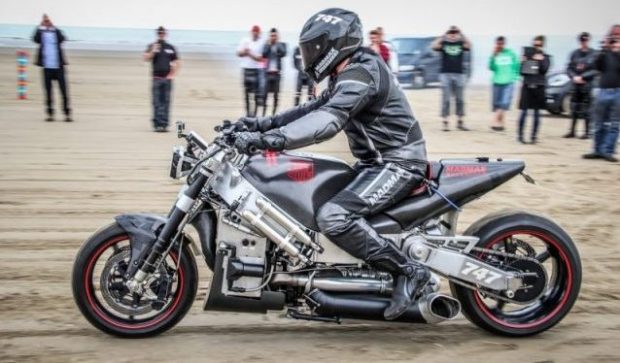 Land speed racer and record-setting motorcycle rider Zef Eisenberg and his MADMAX Race Team have got a new car speed target in their sights.

On the weekend of 6-7 April 2019, Zef will aim to become the first person to achieve a British land speed record on bike and car within a year. The goal is to hit 200mph and beyond on sand in a crazy 1200hp specially-built road legal Porsche 911 Turbo S.

The attempt will take place at Pendine Sands where, in May 2018, Eisenberg became the first person to exceed 200mph with a wheel-driven vehicle, at this world famous speed track (above).

He reached 201.572mph on his supercharged Suzuki Hayabusa laying down the marker as the ‘fastest motorbike on sand’ in the world, just 20 months after surviving Britain’s fastest-ever 230mph motorcycle crash. Eisenberg spent three months in hospital, followed by 3 months in a wheel chair, but defied the odds to race again in under a year.

The first person to use Pendine Sands for a world land speed record attempt was Malcolm Campbell in 1924. On 4 February 1927 Campbell set the land speed record at Pendine Sands in his 2300hp Bluebird Railton, with an average Flying Mile of 174.224 mph. In May 2015, the actor Idris Elba achieved an average Flying mile speed of 180.361mph during the attempt in his 650hp Bentley Continental GT Speed for a BBC documentary.

Each year in May, hundreds of racers and spectators make the pilgrimage to Pendine beach in the hope of setting new records.