You are here: Home / Motorsport / Kirsty’s car captures the action of WRGB 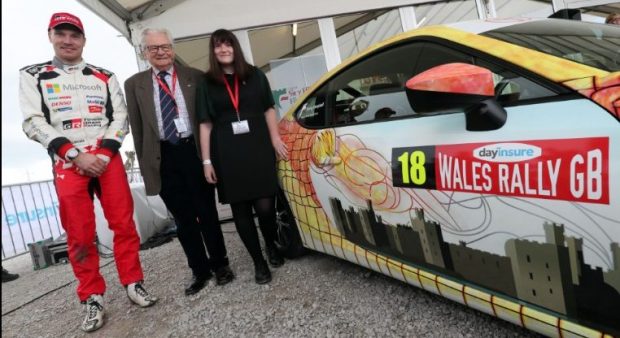 Fifteen-year-old Kirsty – a GCSE student at Dorin Park Specialist SEN College in Chester – was the creative force behind the winning effort, with her striking patriotic design selected from hundreds of entries in the UK-wide competition.

The car arrived at the Big Bang interactive exhibition at the Rally Village in Deeside after a short stop-off at Dorin Park, where it drew many an admiring glance from both staff and students.

“Wow – seeing it on paper and now seeing it in real life is overwhelming,” enthused Kirsty. “I was born in Chester and live in Ellesmere Port but most of my family are Welsh and this design has allowed me to express my Welsh side. I have included lots of scales for the Welsh dragon and a Welsh castle like the one that I see where we visit my nan in Wales. I also wanted to include an advertisement for Toyota on the bonnet to advertise it. Art and design is very much a part of me and this is just awesome.”

“We are immensely proud of Kirsty,” added Head Teacher Jane Hughes, “Even more so as this isn’t just a special school category that she’s won – it was open to all students and judged without preconceptions, so nobody knew what school she was from.

“It’s a fantastic achievement and it’s an absolutely beautiful design – it looks great! It’s her last year at school and the confidence this will give her to go on and do something in art and design is immeasurable. After all, how many kids can say they have done something like this?”